“A look back …” basically means to do a reshoot a figure with a more refined idea in mind. After A look back at Momohime and A look back at Sonico Bath Time I did a reshoot of Sansei Muramasa, a great maid themed figure from Max Factory released in March 2012. 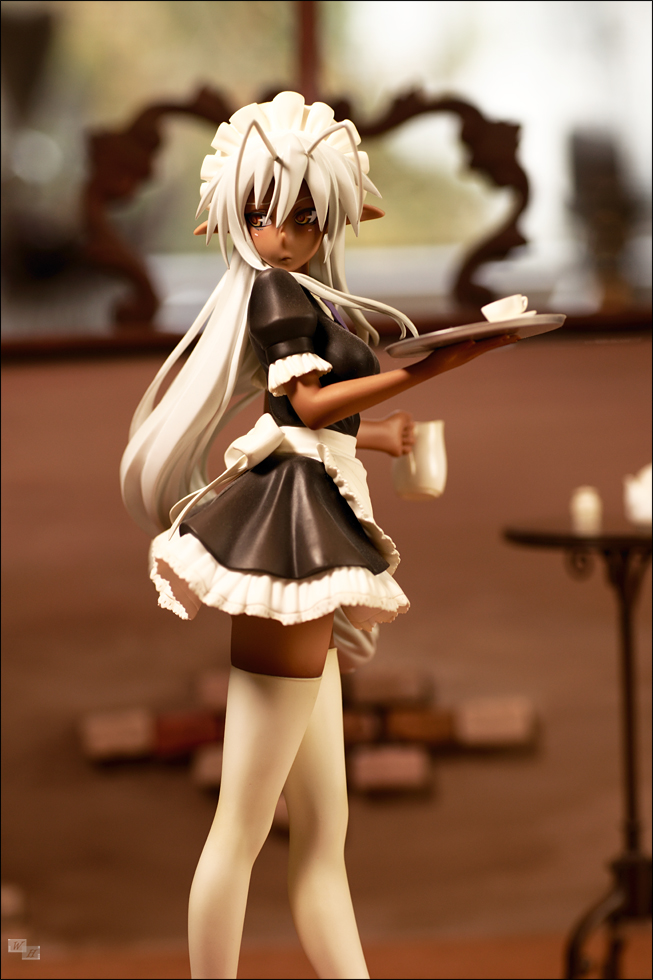 My experience with this figure was overshadowed by bad luck, not the figure was to blame, it was rather my fault, first I named her Sandaime Muramasa in the review. Around a year later I noticed this blogging disaster and I wanted to sink into the ground out of embarrassment. This really shouldn’t happen in a review, never *facepalm*

A more dramatic thing was, that I somehow set the camera to a low resolution for the shooting, a few pictures turned out quite nice, but I had really small files, maybe I was drunk. Anyway this really bothered me, so  lets try to make Sansei Muramasa, sparkle once again. 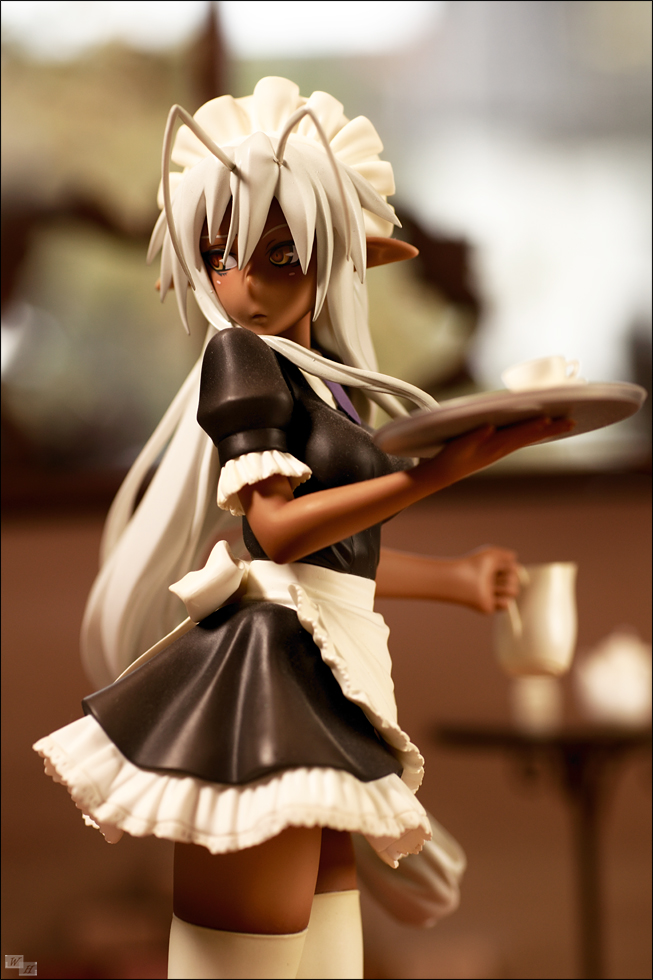 This year the Nitro+ VN, Soukou Akki Muramasa received a lot of attention in terms of figures releases and announcements, mainly from manufacturer Wing. Aside from Muramasa, they also gave attention to Ashikaga Chachamaru. 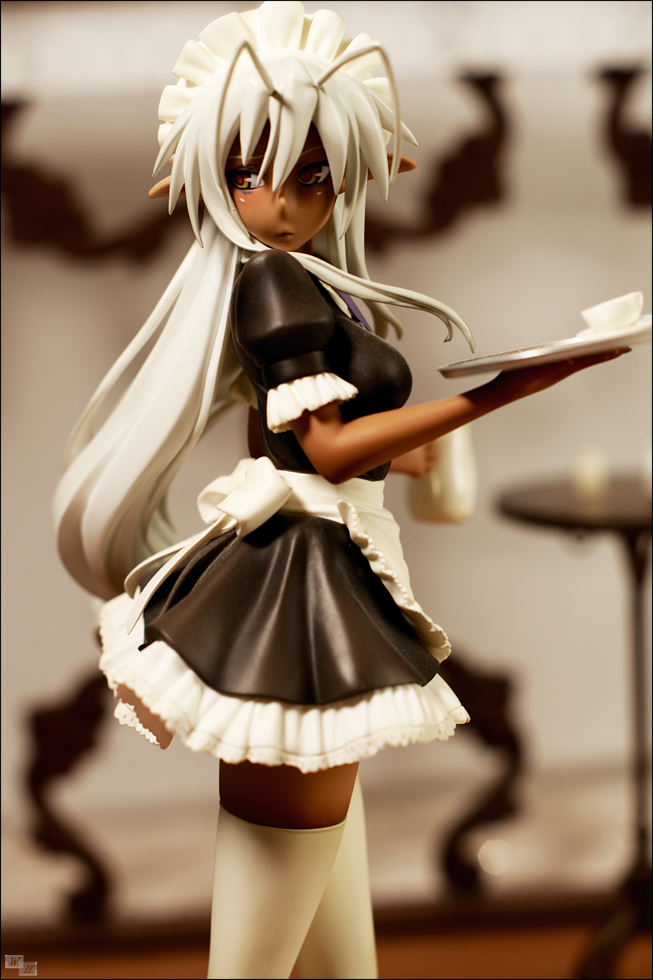 In the 2 (nearly) 3 years I constantly had Sansei Muramasaon display, the figure showed no effects of leaning or desaturation of colors, accidentally one of her antennas fell off, but was easy to fix. 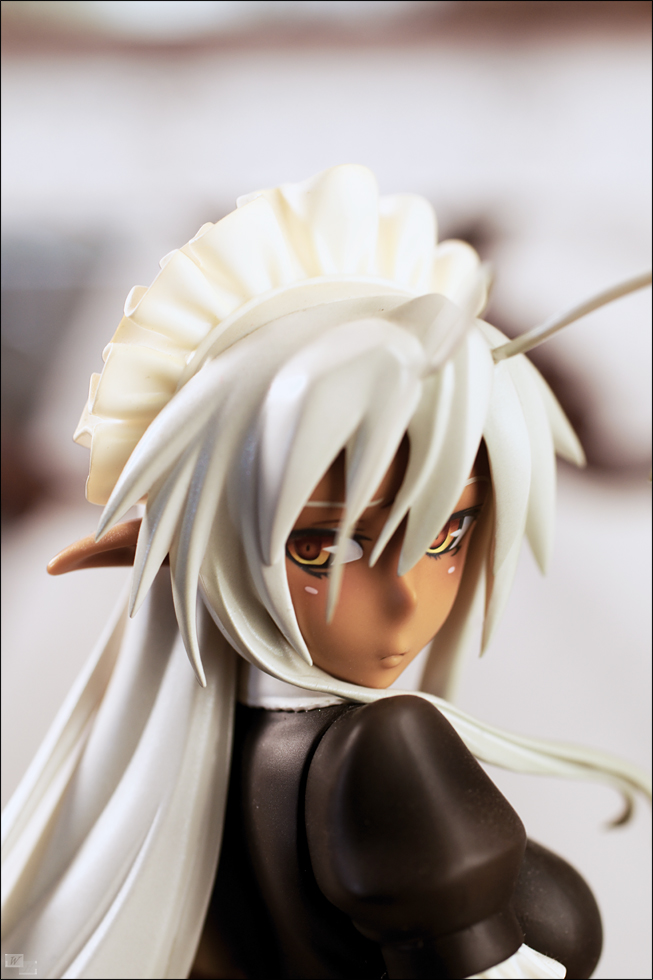 In the year 2012 Sansei Muramasa was released, she was sculpted by Shining Wizard @ Sawachika, a really talented artist, who created some really good looking figures. The character of Sansei is based on the dark visual novel Soukou Akki Muramasa made by Nitro+. At 1/7 scale the figure has a nice size and has an appealing look on my shelf, she has a red carpet base and a single table with loose dishes. Check out her “older” review for reference. 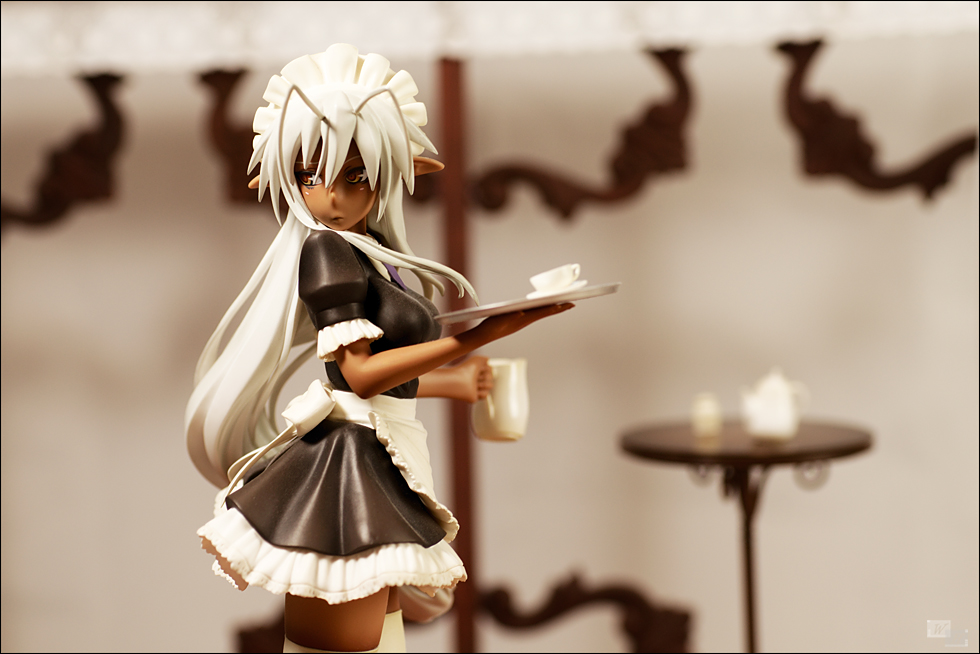 Sansei Muramasa is an especially nice maid related figure balance between looking like a fully fledged maid and making the figure look attractive, the elaborate sculpting makes her uniform appear light and detailed. The hair is long and has a pretty shape, a creamy color and a cool looking fringe. Her beautiful facial expression is unique and interesting, changing between annoyed and being flustered, her golden eyes make her expression very strong. 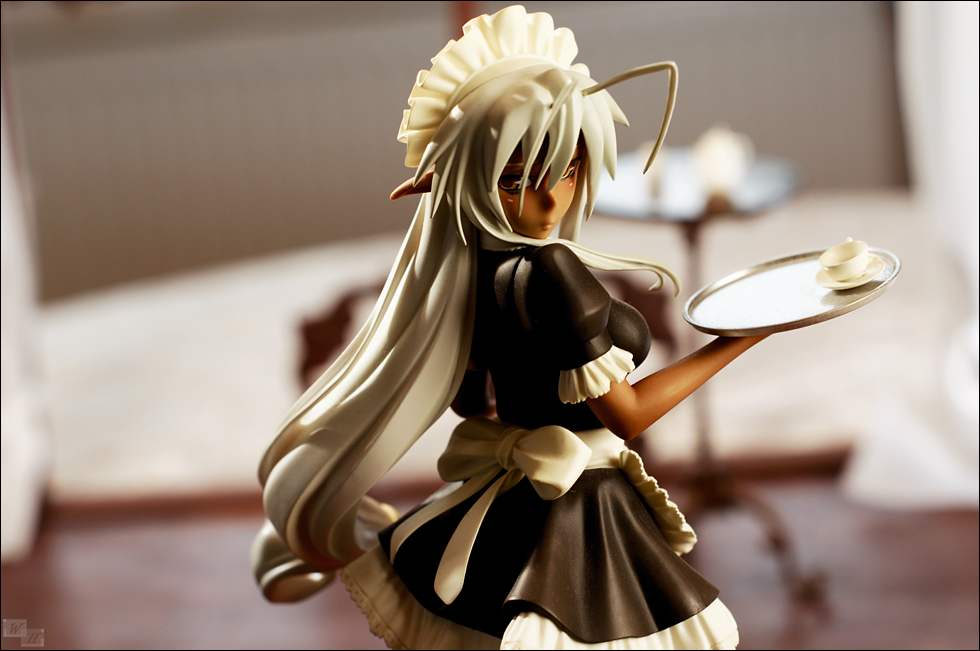 Overall, the figure has a beautiful appearance and covers a number of my appeal points, elf ears, maid uniform, thigh highs and an attractive looking body. The uniform has a very appealing design, colored in black and cream white, the white parts are decorated flouncy. 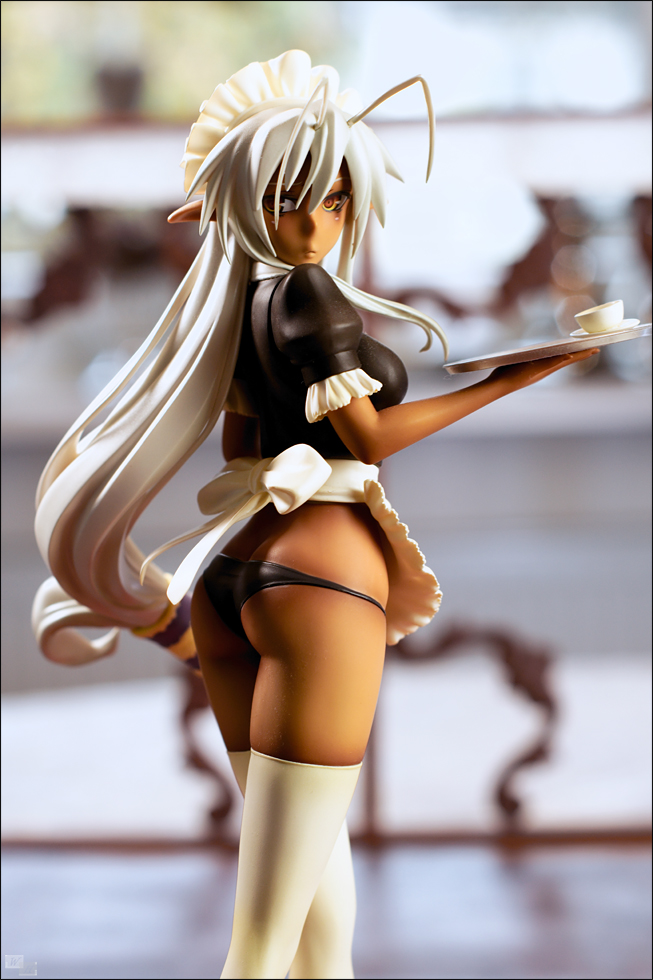 A sexy feature is the detachable skirt, that reveals more of Sansei’s sensual body, her dark, fancy underwear is a real eye catcher. I don’t want to sound like an European conqueror, so I won’t call her dark skin exotic, it’s very pretty, though and suits the figure very nicely. The dark skin is also interesting. More dark skinned figures have appeared since 2012, still we rarely see this on figures. Naturally, anime/game characters live in Japan and rarely have dark skin. 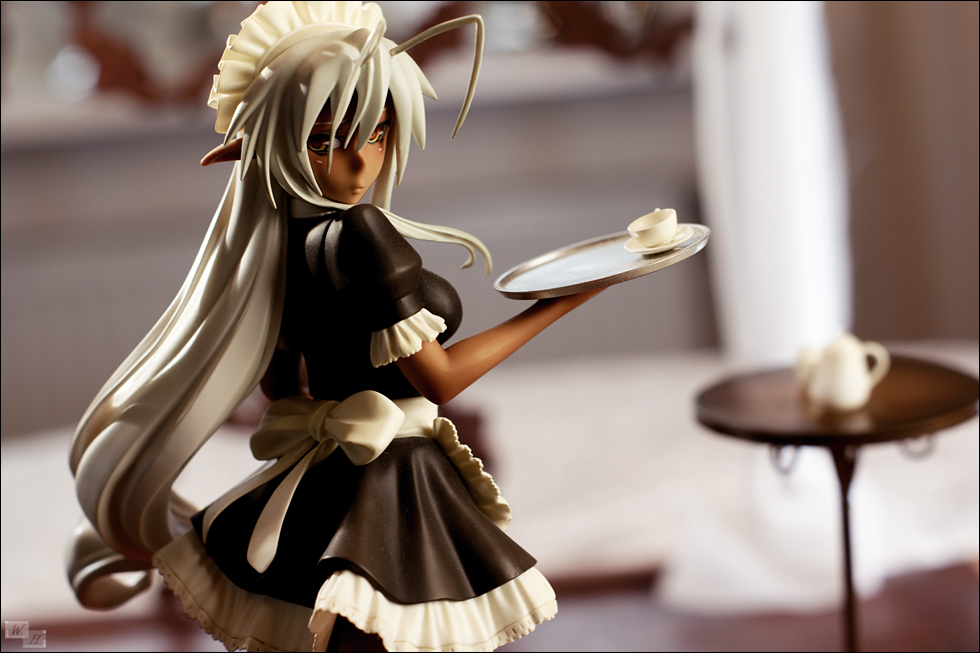 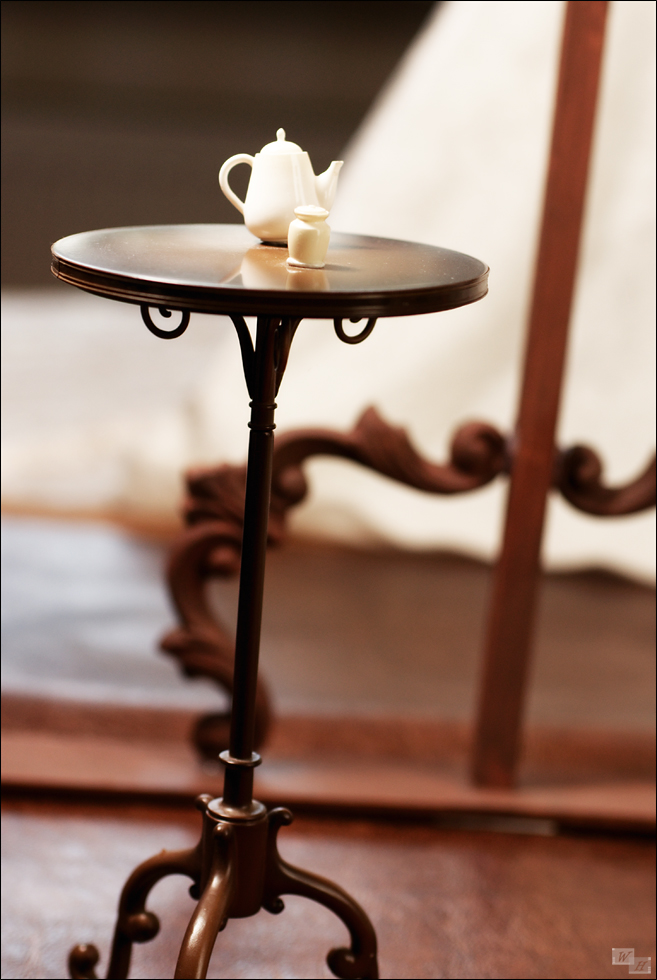 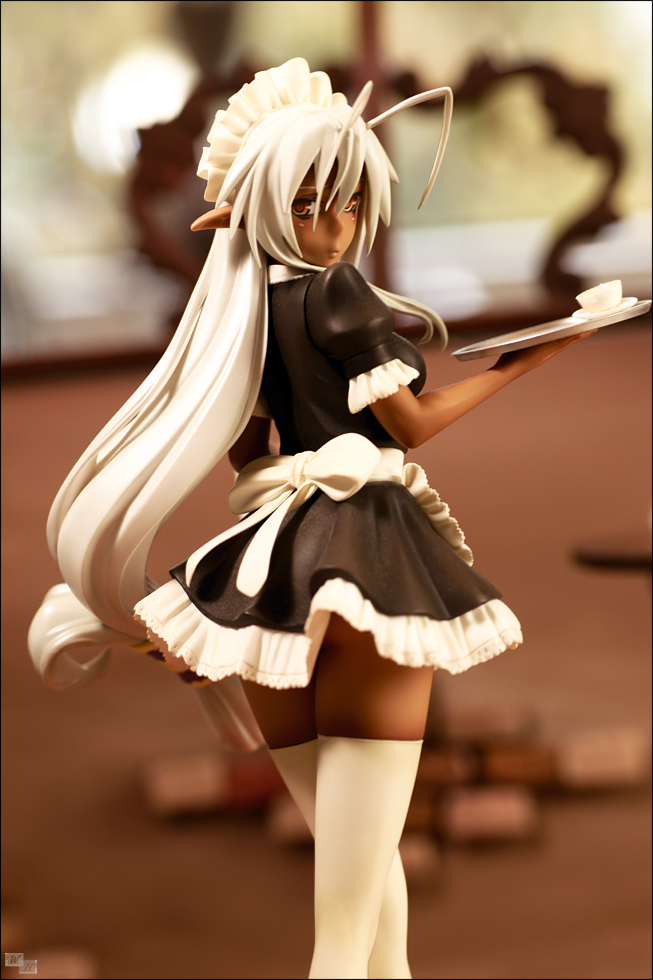 Having a real idea for the shooting would be an exaggeration, I had a classic cafe in mind, where Sansei serves coffee and tea. So I’ve build a fancy window frame out of cheap wood parts and ornaments of the right size, I’ve bought on ebay. Afterwards I attached curtains on left, right and a fancier lace stripe on top of the frame.

To gain more height for the backdrop I also made a background wall made of MDF and painted it in light brown. To have more detail I glued bricks at certain areas, I’ve painted the scale bricks in different, but still related colors.The floor isn’t that important, since it doesn’t appear that often when I’m using a 50 mm lens, nevertheless I also gave it some thought as well, in this shooting I used leather with interesting texture to imitate an expensive looking floor. 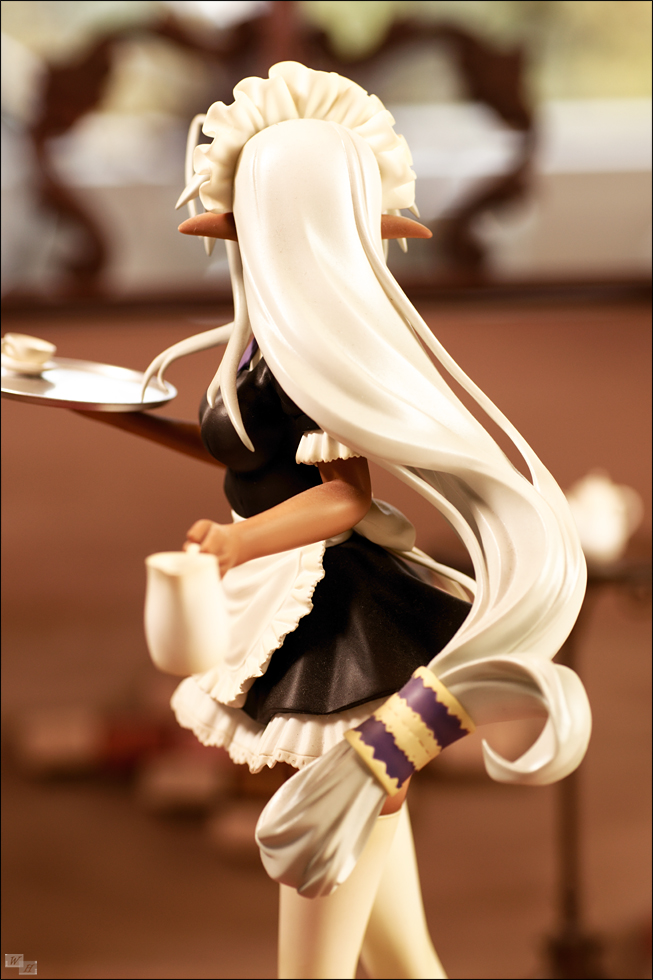 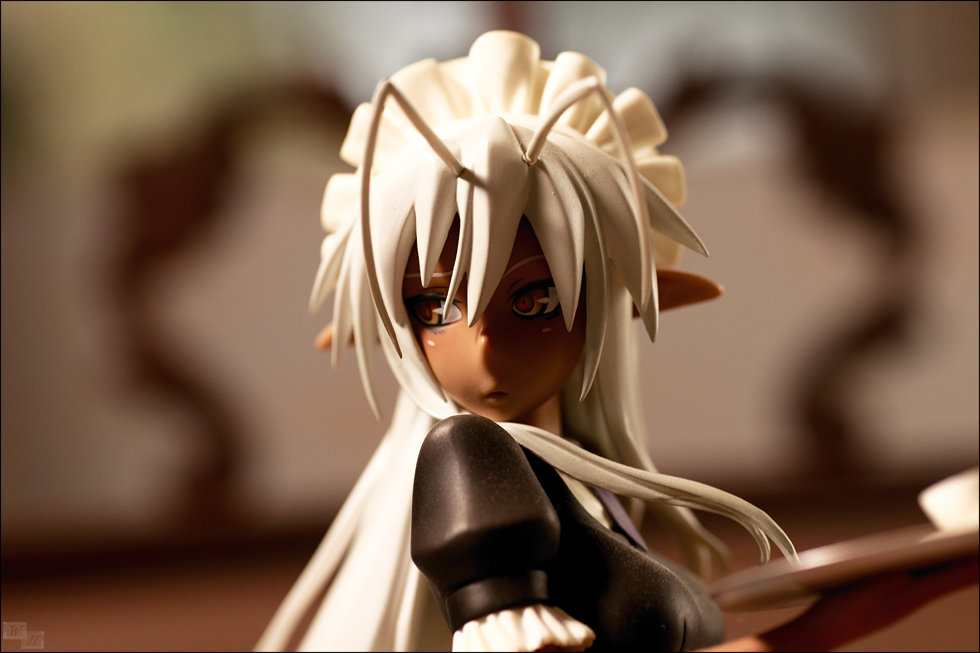 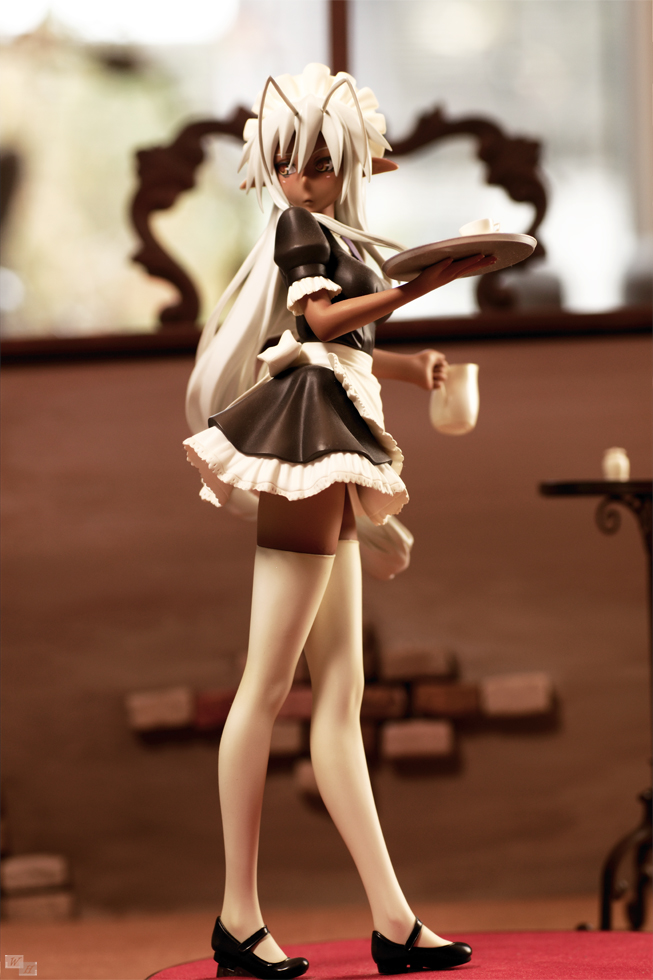 Obviously Sansei Muramasa is a beautiful figure, not entirely flawless, on very close inspection of the pictures at the PC screen, the figure has some seam lines, visible at the ribbon at the back, the backside of her thighs and very faint ones at the waist. Her hair also has a few unclean spots, but as I’ve already said, this can only be noticed from a very close distance. 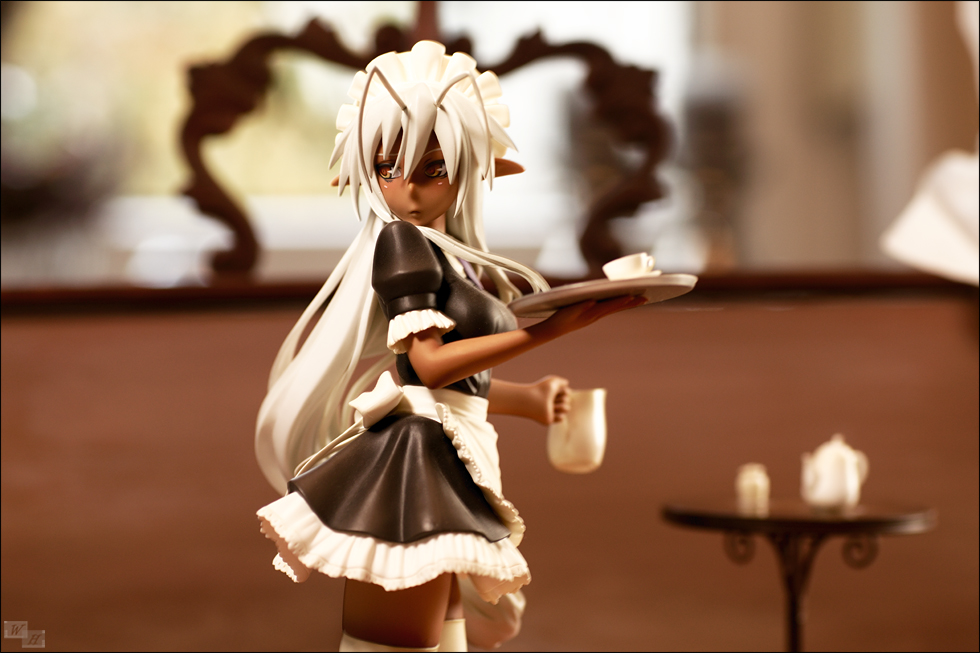 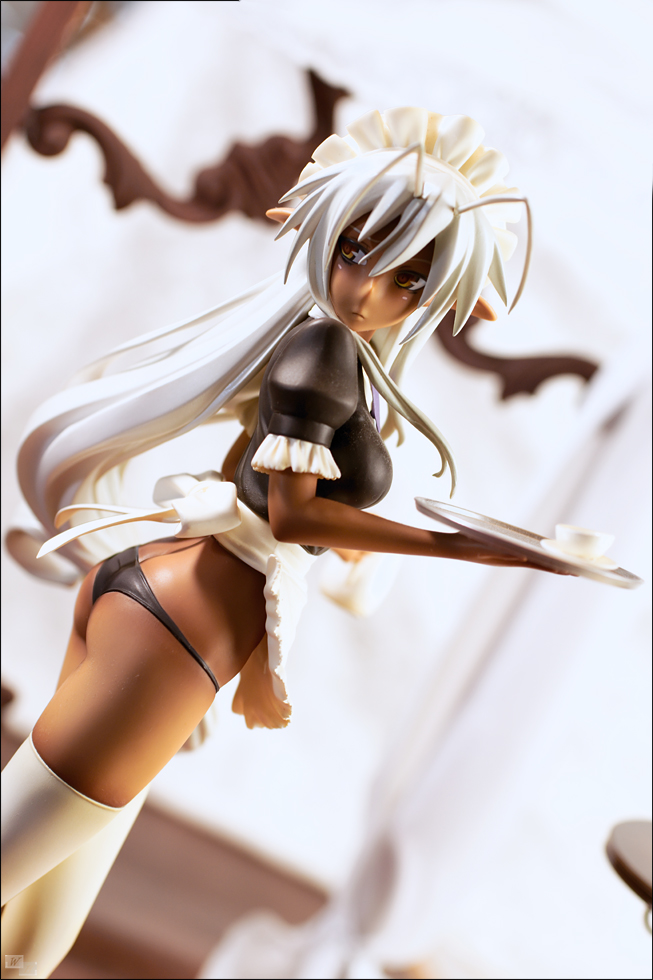 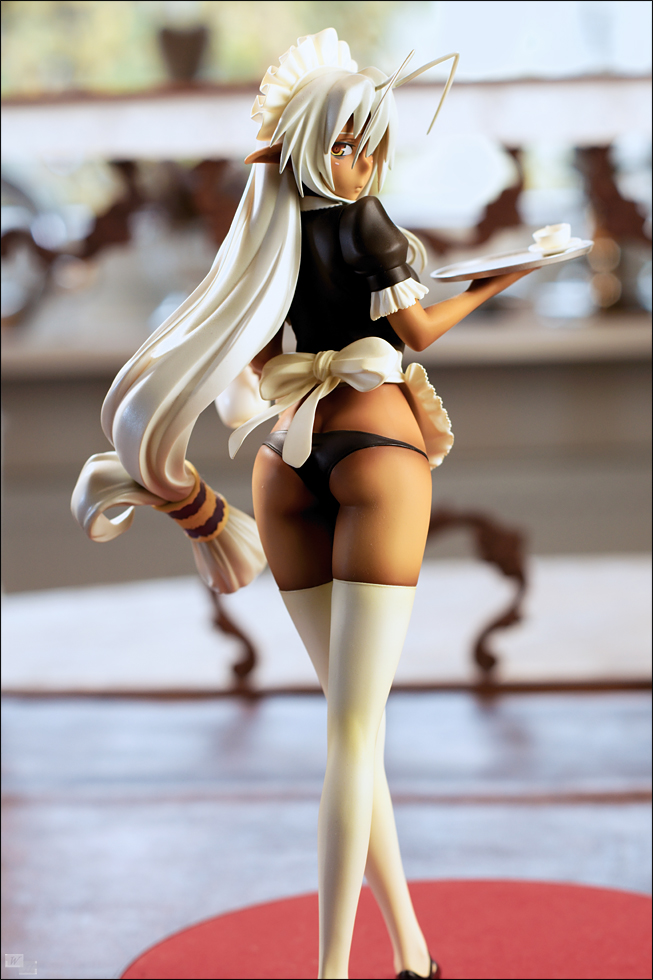 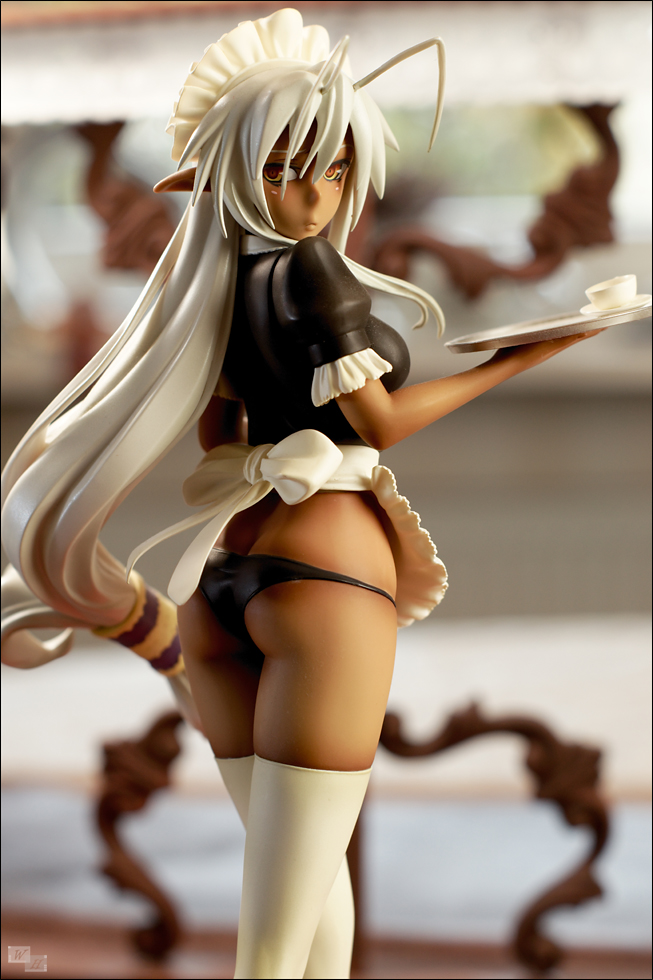 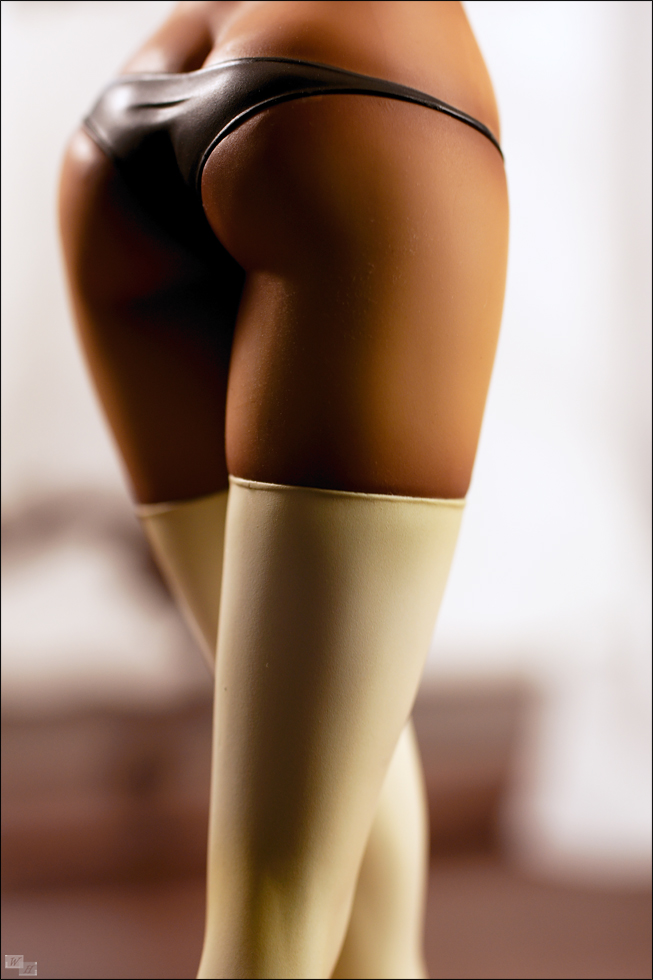 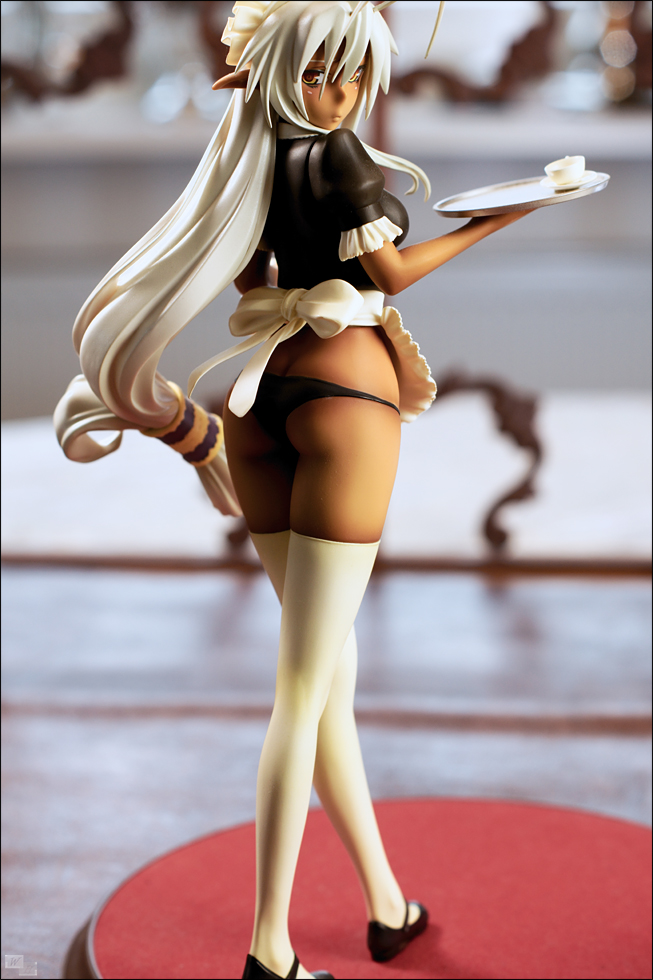 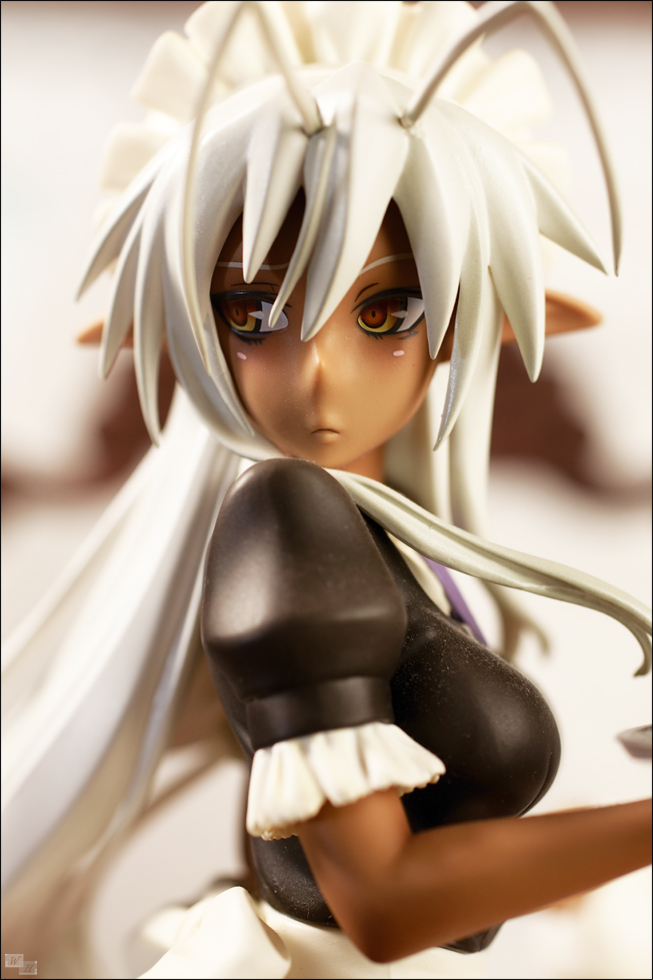 I had a lot of fun with Sansei Muramasa, also this second time I took pictures of her, she is very photogenic, I think the new pictures turned out a little better in terms of lighting and sharpness. Partially, a good model makes good pictures ^^ I like the figures appearance of a very pretty grown up girl with a still youthful expression. She’s a very good looking Elf lady.

With a little self critism at the end, I could have planned her background to be a little higher, in the lower angle shots it’s a little obvious where the background ends. I also learned again that dust can be quite persistent. 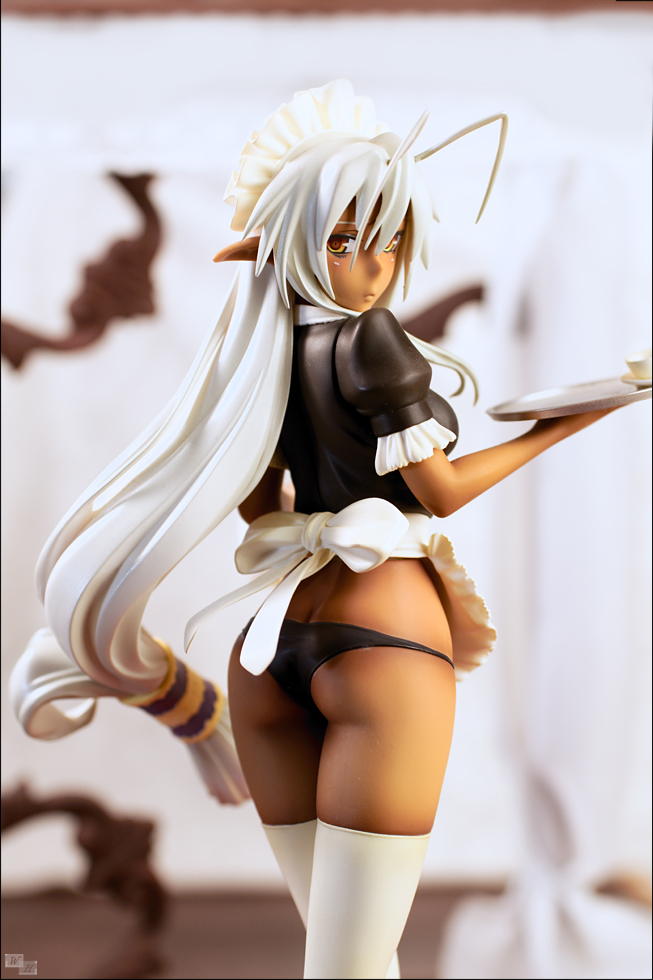 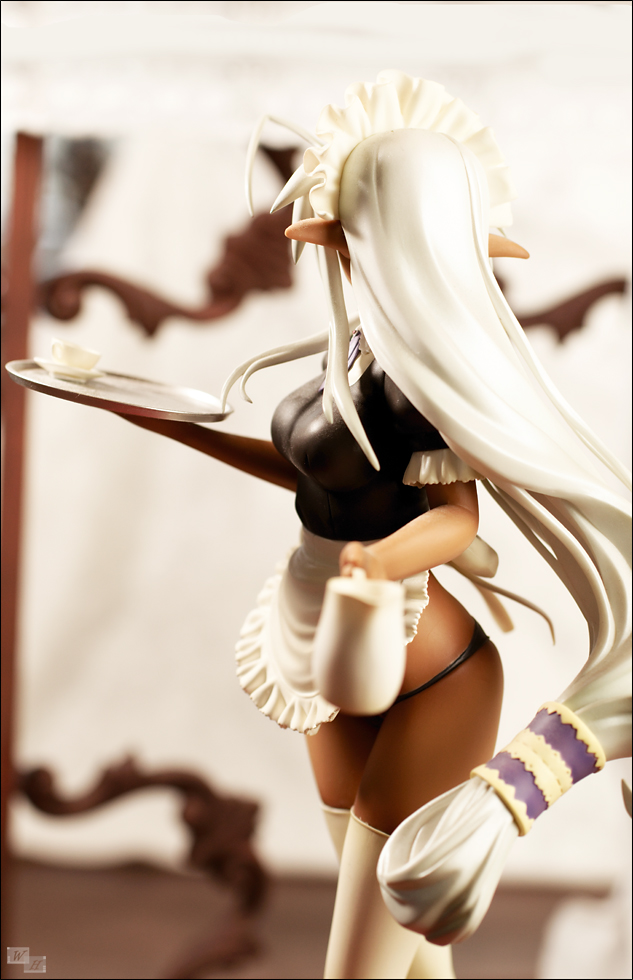 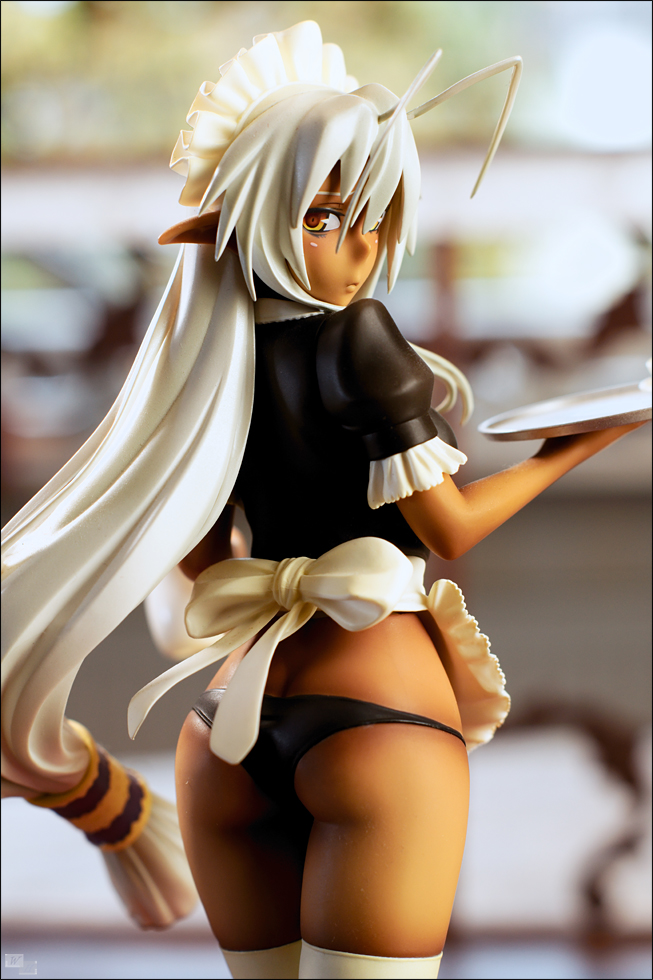 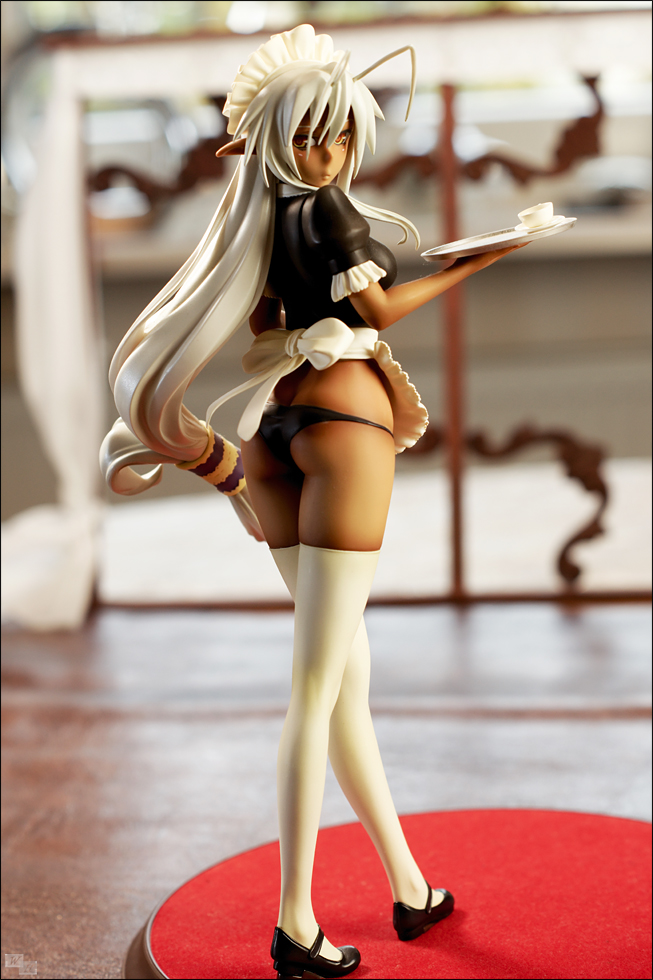 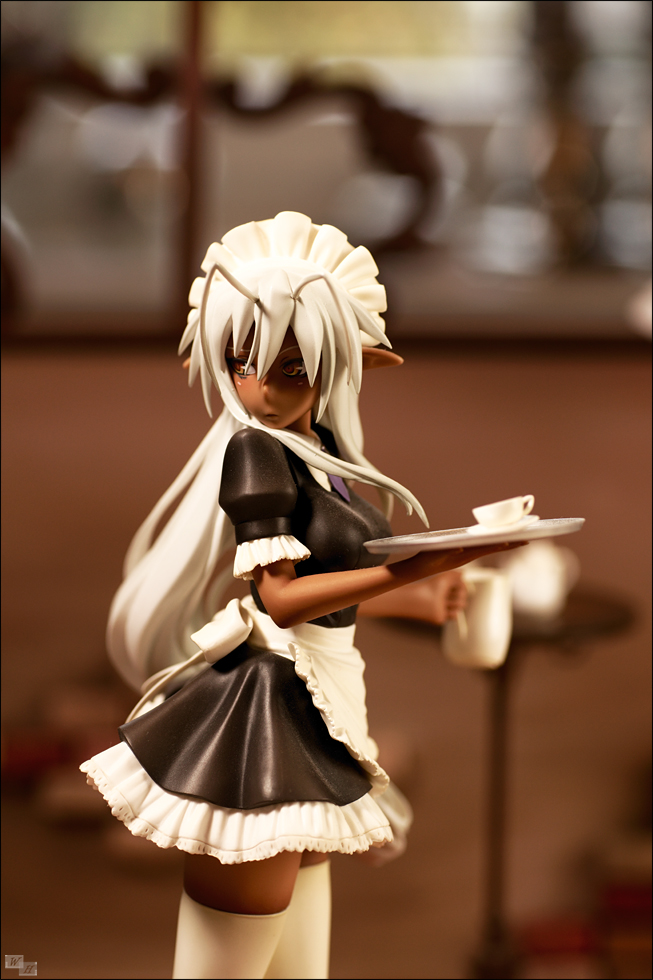 I hope you’ve enjoyed the pictures of Max Factories Sansei Muramasa, the next post is scheduled for December 24th.
I guess the next “A look back …” related Post might be about Sayaka Miki, one of my alltime favorite figures. I already have the idea for the setup, but will have to invest some more time in building the props.

Do you have any suggestions which of my figures I should choose to do another photoshoot?