The end of the year 2014 comes close, well actually it’s a little early for that and I still have 3 possible incoming figures this year, but I want to finish this post to have time for other things.

So it’s time for a summary of the financial numbers of 2014. Like last year  I monitored my expenses on the figure hobby and created some charts to explore some interesting data.

In 2014 I ordered 26 figures from these 26 figures I’ve already sold 7, since I wasn’t that satisfied with them in the end, in 2 cases I didn’t bother to open the box. 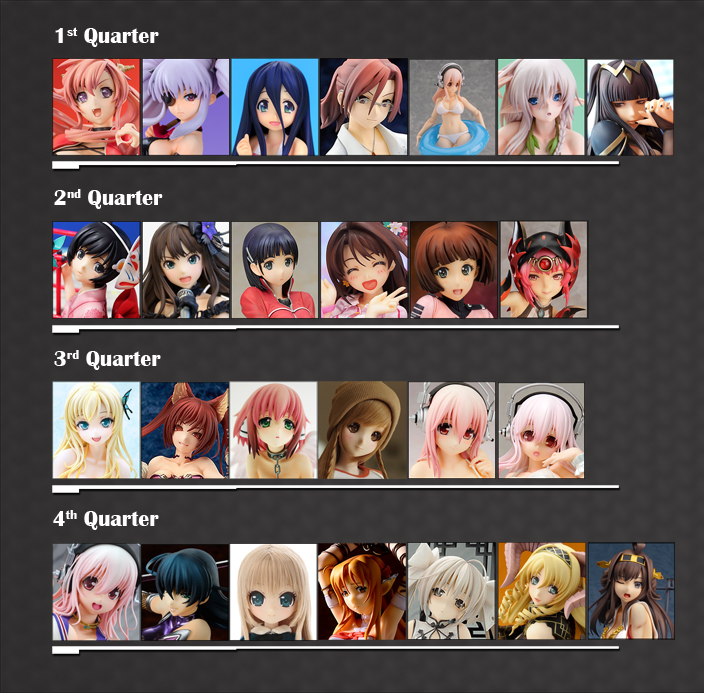 Cutting back didn’t work as I imagined and I actually wasn’t trying too hard. Compared to 2013 where I ordered 28 figures 2014 was a little improvement, nevertheless. 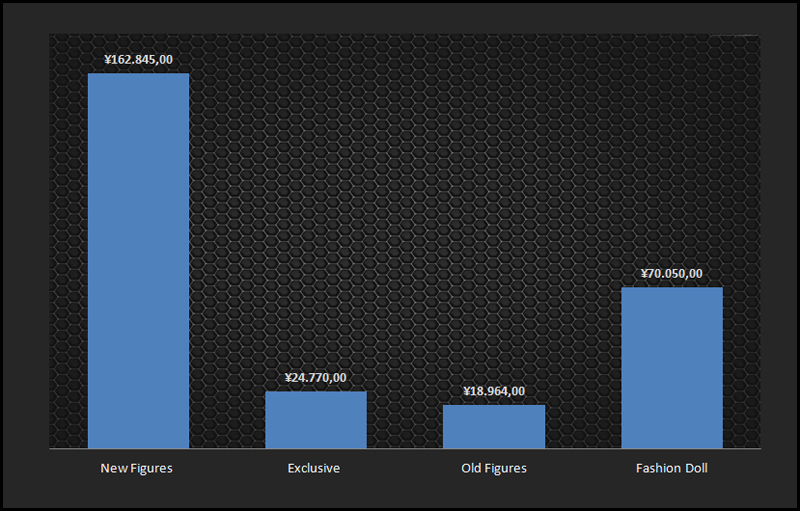 As you can see I’ve spent most money on new, regular run figures, I only ordered 2 Exclusive figures and one older one, Aozaki Touko by ALTER. I nearly have all old ( figures made before 2010) figures I ever wanted and spending too much on old plastic is not the best idea, there are so many higher quality figures these days. I bought a 1/3 scaled fashion doll this year without the stuff I additionally bought for Mirai, it was still a big number in the spent budget.

Mirai also turned September into the most expensive month, together with a scale figure we broke through the 60.000 Yen wall.  In an average month I’ve spend around 20.000 yen on figure stuff. Several figures delays lead to ordering other stuff, it’s a really bad habit of mine.

The yen turned a little crazy this year for several months it was pretty strong, well not as strong as in early 2013, but with increased figure prices combined it wasn’t that funny, at the moment it’s very weak, which is good for oversea buyers. 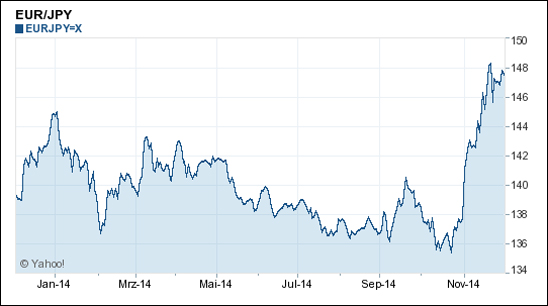 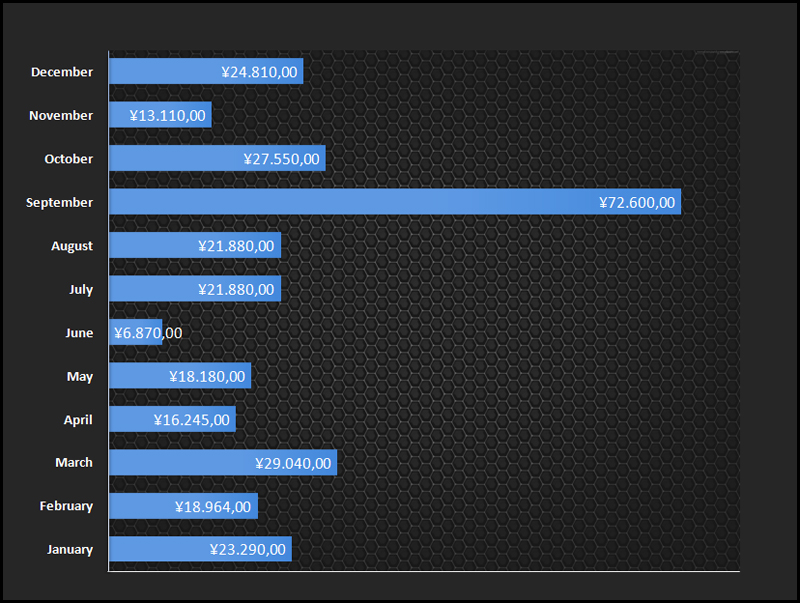 It’s not all Mirai’s fault, figure prices have also increased and I happen to always like the pricier ones ^^As you can see below the chart says that 54% of my figure purchases consists of items wîth a above 9000 price tag. 14 to give you a real number. 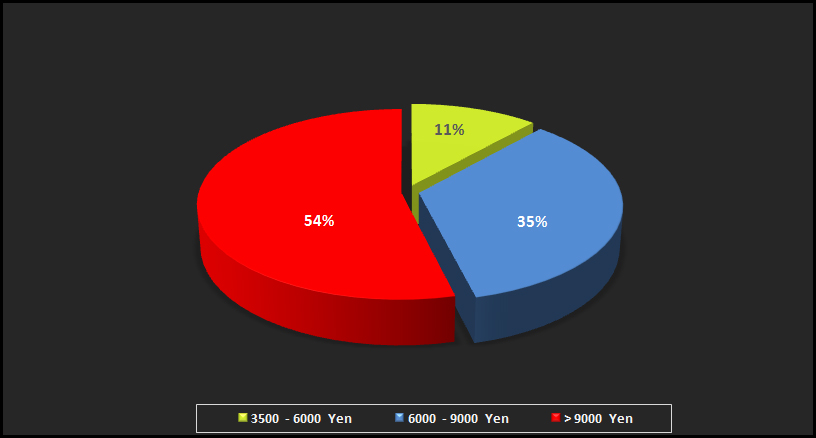 The figure manufacturers I bought the most figures from were Max Factory and GSC, also got some more ALTER and Orchid Seed stuff. I liked Cerberus, Sonico Santa version, Maeda Keiji, Queen’s Blade Alleyne. Araragi Tsukihi, Sonico – Cheerleader version, Sena Kashiwazaki and Asuna a lot and also the Idolmaster Cinderella Girls from GSC were really appealing. 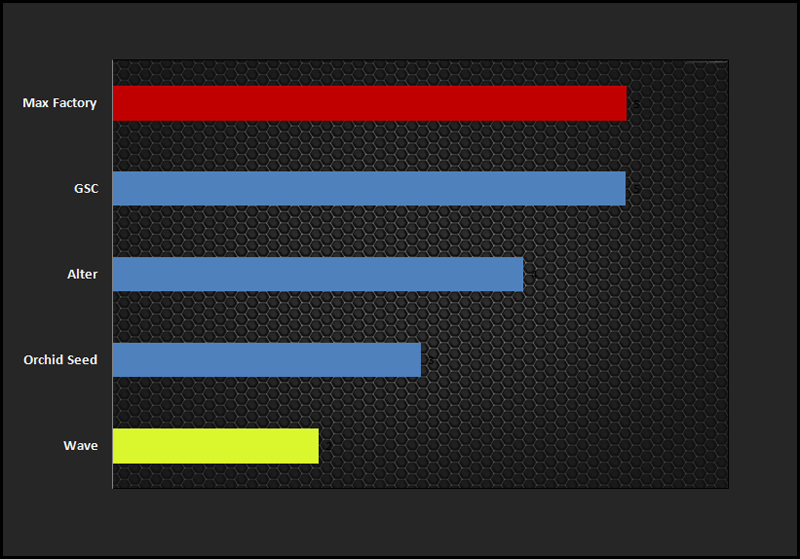 Most figures I’ve bought were again 1/8 scale 12 to be precisely, also around 5 1/7 scaled beauties. Sena Kashiwazaki which was 1/4 and with Mirai we got even bigger scaled stuff. 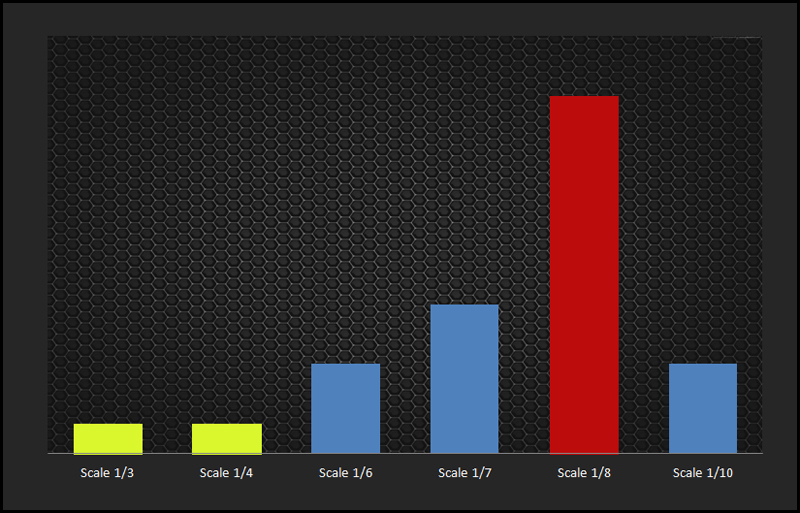 Figures still got 71% of the overall costs, what puzzled me was that shipping and custom fees were rather similar in 2014, I calculated again and again, but nothing changed. In 2013 the fees only made 8% not 14%, shipping 21%

The overall shipping costs dropped in 2014, with EMS less often used, I could save some money with choosing Airmail or SAL Sometimes EMS just hurts in the wallet. 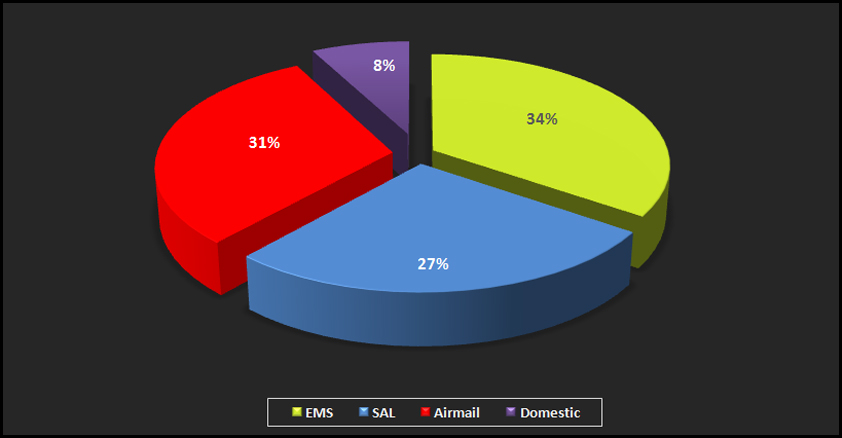 That is the end of my little chart show, hopefully it wasn’t too boring?

Do you also measure your figure expenses? If you have any questions, don’t hesitate ^^