The plan of buying less figures than last year works so far, although it makes the hobby more exhausting, when I decide about the pro and cons of certain figures, compare them and decide against preordering instantly, instead of ordering everything pleasant for the eye.

Some more months passed after New Preorders part 25, since then I accumulated 4 orders and that justifies a new Preorder Post, it’s part 26 of New Preorders. I will talk about my preorders and other figures that appeared recently and I consider as appealing.

I was very much looking forward to the day preorders were opened, I saw this Saber at last years Wonderfestival as she was still an early prototype. A more curvy Saber in swimsuit is the right thing for me, I got super excited as I’ve learned that she’s scaled 1/6. I like most alternative Saber figures, I already have the Saber Maid R, which I still think is awesome. This Saber has a confident face expression and body language and appears a little teasing and dangerous, not to forget that she looks damn hot ;D 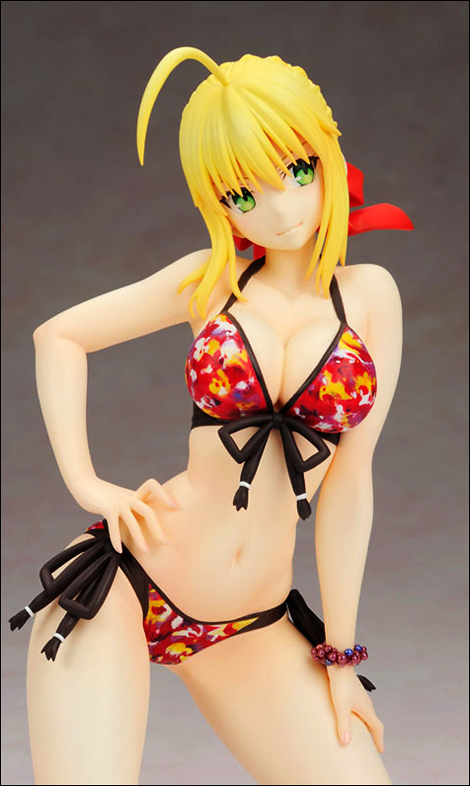 With a official price of 14.815 ¥, This is probably is my most expensive preorder, since Native doesn’t ship to germany and I wasn’t that determined to pay a proxy, shiping costs and customs fees, I placed my order at a german shop, Figuya.com. It’s based on a Toni Taka artwork, what I like is that sculptor applied a few changes on her face to make her look more distinctive. The figure has a rich design and looks just beautiful. As Native figure she is supposed to be a little sexy, she’s not as lewd as other Native products she shows her allure with her low cleavage and revealed legs, she has optional panties and a partial castoff feature.

The figure is sitting on a tableclothed table and also comes with a big traditional umbrella. 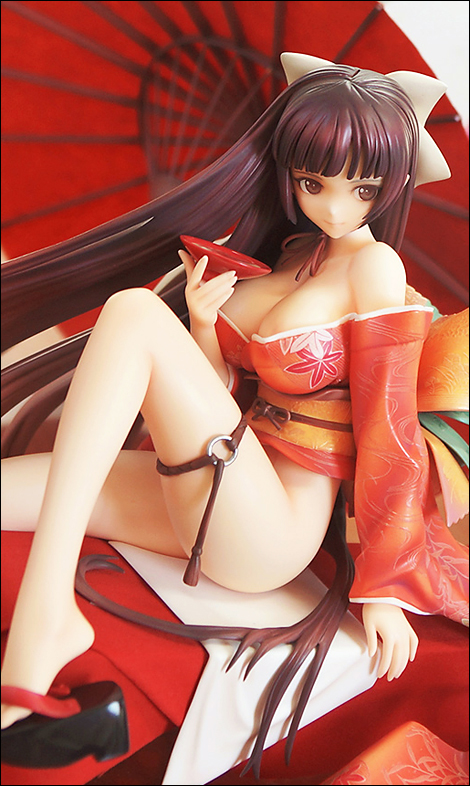 In their evolved form Shigure and Yudachi are the coolest looking Destroyer Class girls. As I saw Shigure shown at the last Wonfes I literally freaked out since she is one of my favorite ship girls, if they had shown Samdare I would have probably suffered a heart attack XD

The design is based on a collector card, that is why she looks a little different than in the Kancolle browsergame, but it is no drestic difference, she’s still looking awesome. I like that she has these big guns, GSC also made them exchangeable with smaller guns, I’ve read that it is also possible to remove the gunholder at her back. The torpedo pods are rotateable. 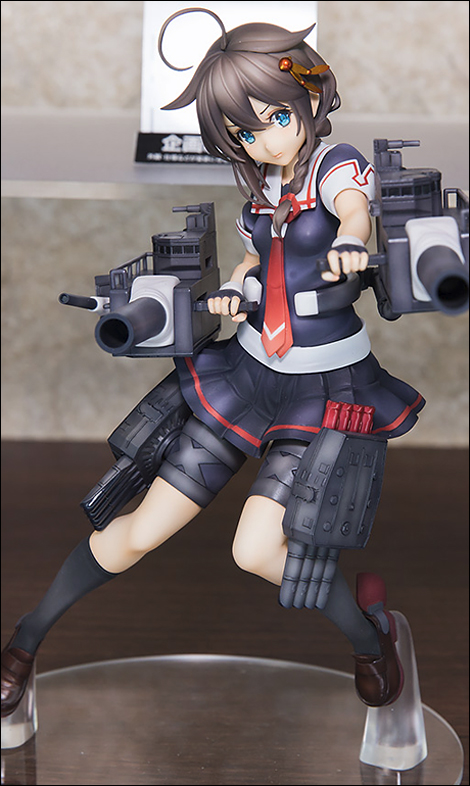 Awww this was a warm and sweet slice of lifew anime, have you seen it? Chino is a girl who works at a coffee shop, even with her young age she is very composed and demure, still she is really cute when interacting with her friends. I was really happy about this figure announcement from Ques Q, Chino looks really adorable, I love her pretty uniform and the cute facial expression. She’s listed as 1/7 scaled figure what I really appreciate.

It’s funny that this figure is so not fitting with my other preorders this year, you can guess why. Since she comes out in the same month, I combined her order with the buxom Succubus lady, which I start to feel embarassed about, I can’t imagine myself to display the 1/6 Demon girl though I’m also looking forward to it and her beautiful face… whatever. 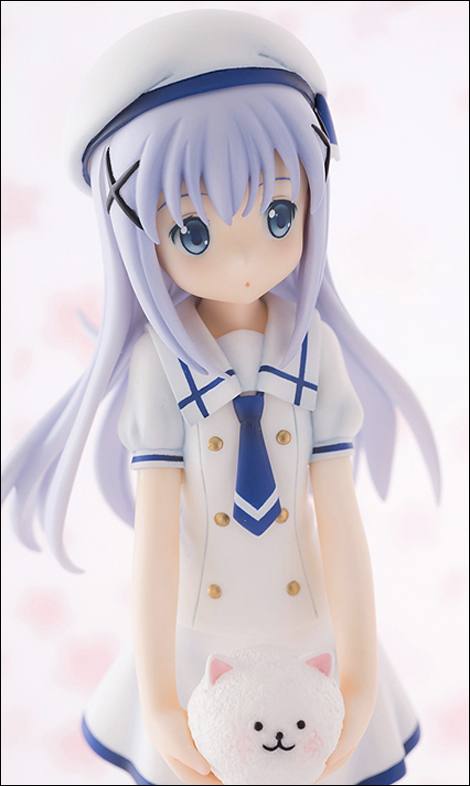 I’m a big fan of Captain Earth, it’s the kind of show I enjoy with action, friendship, romance and cool villains. At least one figure of it was announced, Moco one of the villains, not my favorite character from the show, but it’s fair enough. Yeah she’s a sensual character and her clothes are raher extreme. As special version she has some extra parts. I did not hear much praise about Embrace Japan but I can’t be picky also the prototype looks more than just good. 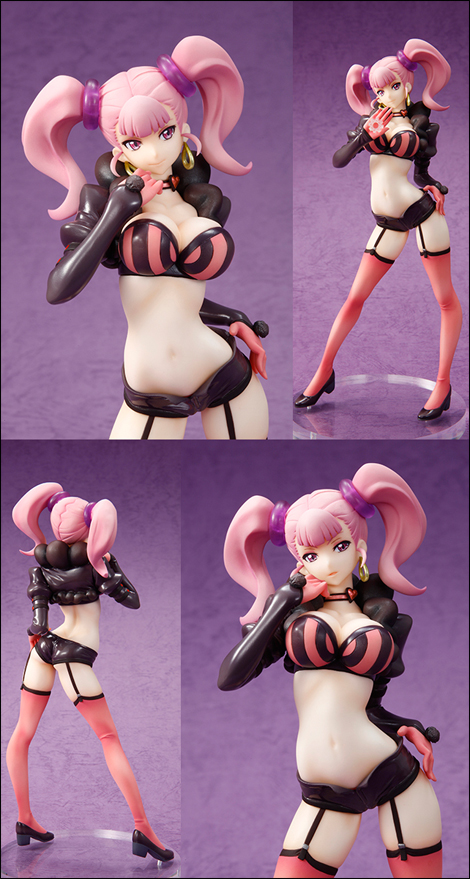 I haven’t ordered these figures putty download windows , but at least I find them overly interesting and like to list them. It’s unfortunately that most are sheduled for a July release, with 3 preorders in this month I’m already full. Nevertheless, feel free to tell my which one you like or which not, or which figure you would like to see in a review

I feel like I’ve waited an eternity for this figure to reach preorder status, I was follwing the “progress” since it was a grey unpainted prototype. I was delighted to see her ready last Wonfes, but you know happened I don’t want her that badly anymore, that feels so bad.

I recently read a nice quote about her on mfc “seems like a long time since figures with this kind of art style has been made.” Well, it probably wasn’t the intention of the writer, but you can say that she as figure is kinda outdated after these three years. She’s nevertheless cute, don’t you think? I can’t help myself I hate these shoes and socks, that is no convincing beach figure… 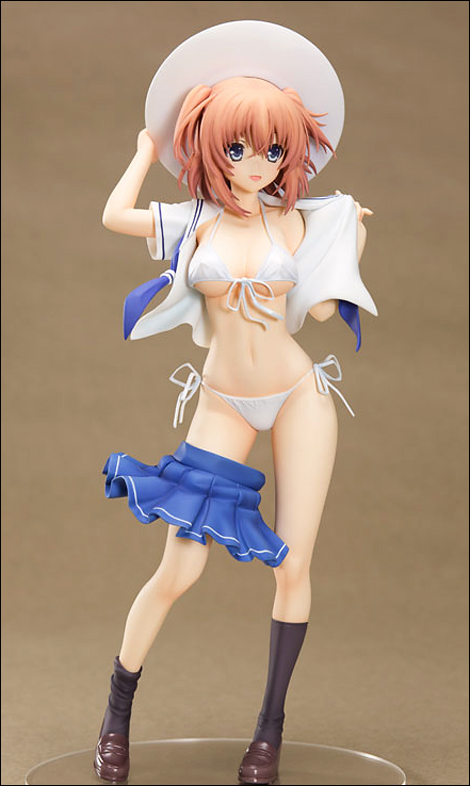 This figure is a great portray of the friendly tank otaku Yukari, Girls und Panzer was one of my top favorite animes recently and I approve of this, be it the dress, the way she is posed or her friendly and bright smile, she’s very cute and surprisingly affordable. Would be cool if all characters of team Anglerfisch would get a figure, I’m no fan of sets, but would consider to make an exception here. 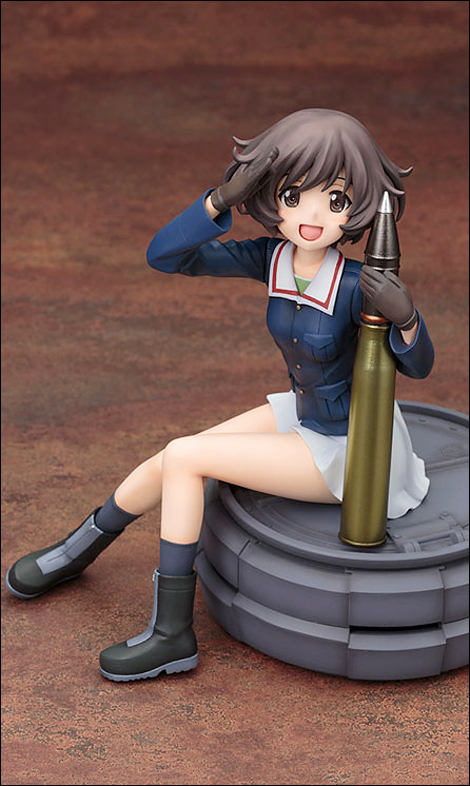 This Katsuragi figure has a certain feature, you can put things between her soft boobs…
I kind of like how this figure is made, her body looks great and the carttonish Senran Kagura style has been adapted faithfully. Ok the often so confident Katsuragi doesn’t look that happy, but that also has a certain appeal to some folks. She’s somehow very cute. 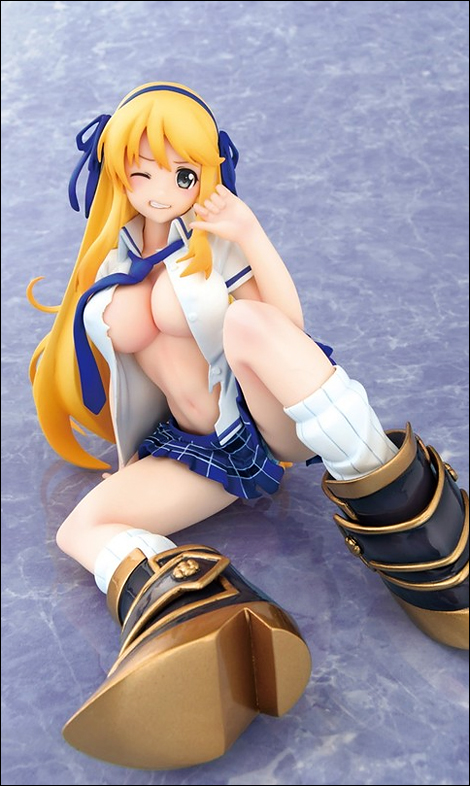 I don’t know this character to be honest, but I like pretty vintage space opera costumes like hers, the woman herself has a nice expression on her face and an appealing hairstyle. 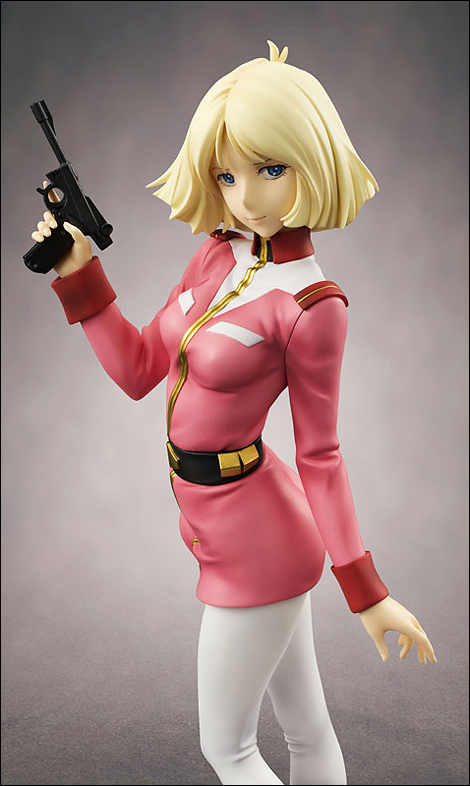 I like the design of this figure quite a lot, much more than their previous bikini armor figures to be honest, since bikini and armor have a more appealing desgn. Daiki is always good with strong and buxom warrior lady’s like Bertille is and recreated her alluring body’s in a very detailed way, even better since she’s scaled 1/6. Bertille has lovey corkscrew braids, too. While we are speaking about it, does Daiki still use these cheap black bases? 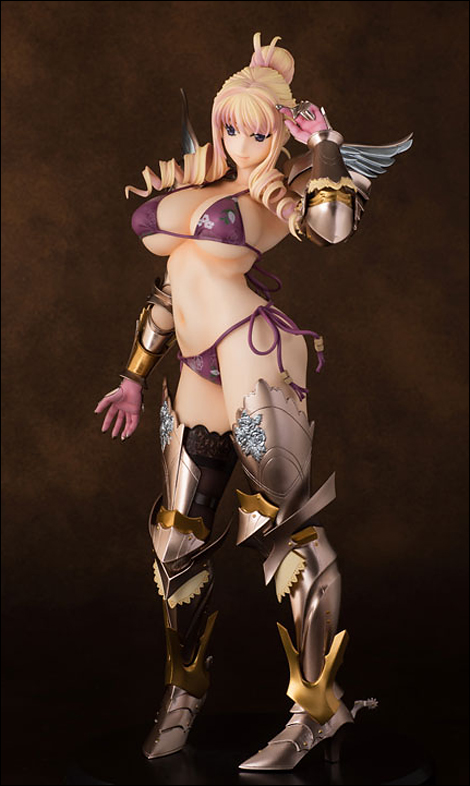 A figure that portrays Sinon as an even more badass sniper that she actually already is. I like that the face goes into a more realistic direction. Also she appears very detailed and nicely made, the 1/7 makes it more interesting, the retail list price unfortunately is a bit high, even when most shops have a discount. 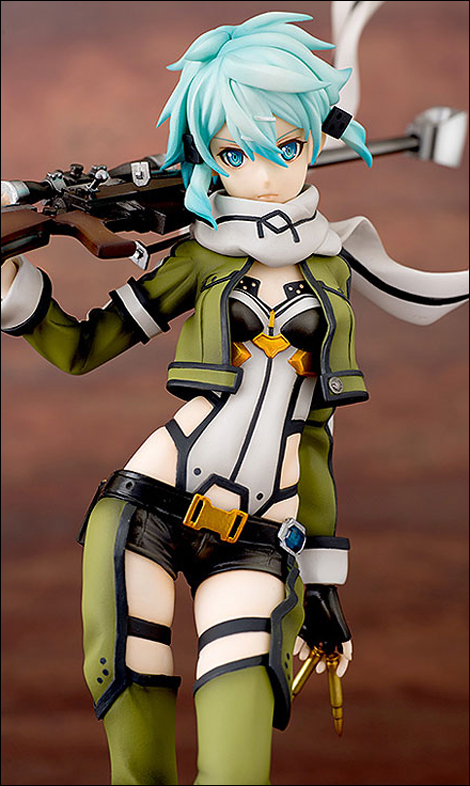 I plan to watch this show in the next few weeks, Chitoge has a very distinctive appearance as character, I’m already enchanted. Alter made anbespecially great looking figure in a lovely casual outfit captured in a super dynamic, cheerful pose. I love the details of her face so much. Damn July release, hopefully I can get her later… delay, delay, Delay! 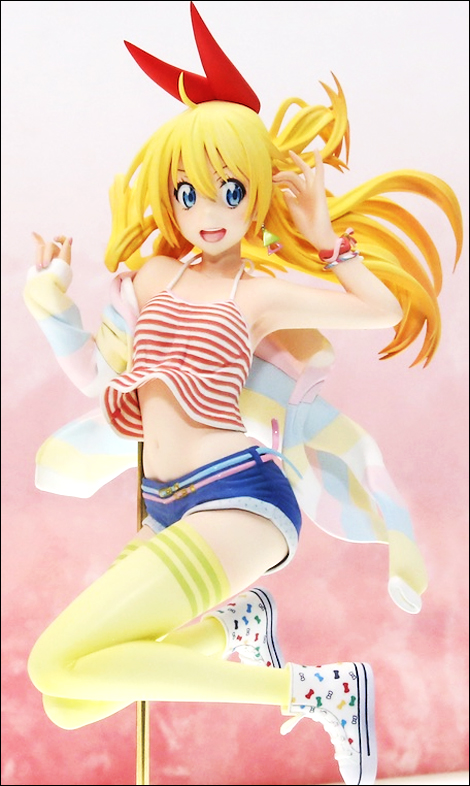 That is probably my favorite bunny suit figure, since she looks beautiful in it. She will have a happy face and an emarassed one. The figure is still work in progress, but I assume her to be ready for preorders within the next two months.