Apparently I really have too much fun with the fashion doll hobby, it’s just too exciting ;D
I actually did not consider to buy another BJD after Mirai, but one thing lead to another… Everything started some months ago, when I found a post at Orchid Dolls about of a face up commission. I always liked custom Dollfie Dream heads, it’s nice to have a personalized Doll.

After several months of deciding what I actually wanted Mirai’s “little sister” to look like,
I asked Clockwork_Angel from Flickr, if she would have time and interest for my idea…

Mirai already was given a name in the factory, but of course a custom Doll needs a proper name, too. I decided to name her Satosakura, Rio 里桜川 千  (village cherry blossom), it’s a name often used in animes of the 90’s, I always liked that name, it’s short and has a very nice ring to it. 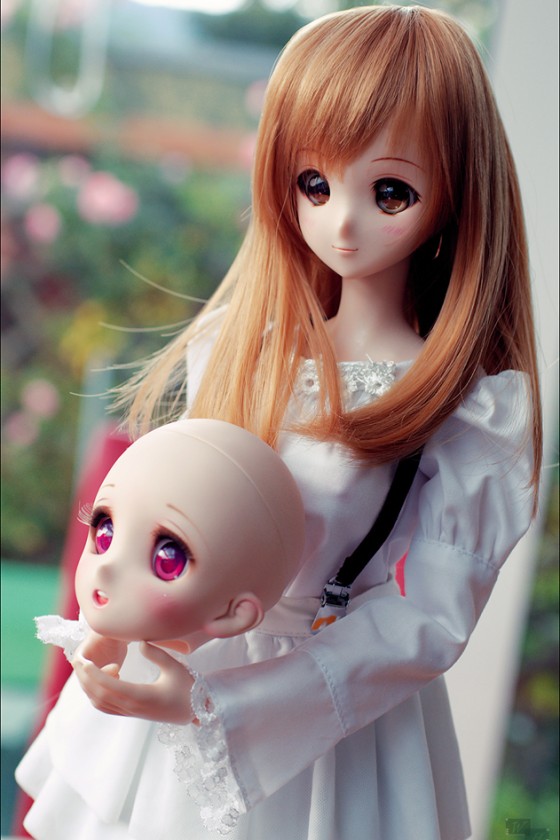 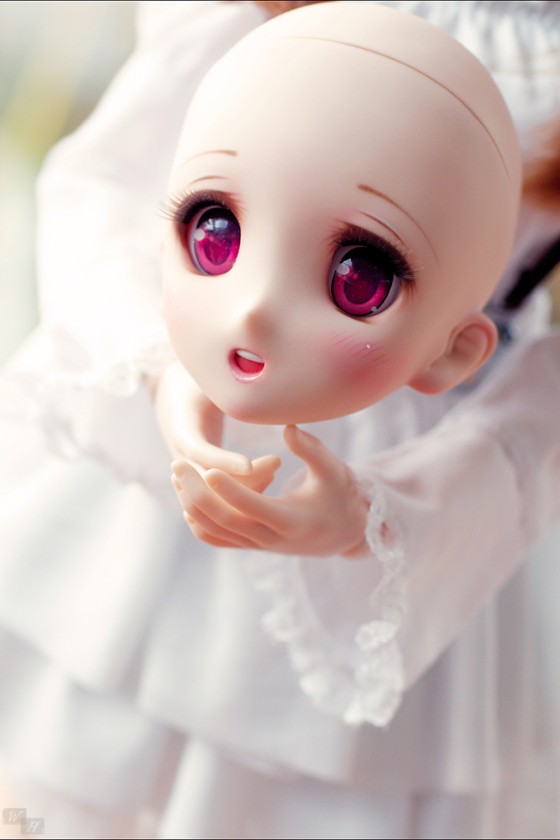 She was very friendly, gave me some advice and took me by the hand, since I was very new to this. I gave her my requirements and also some artistic freedom, since I like her style a lot, for example the use of eyelashes. I decided to have a cute head with some dramatic make up, in the end I chose a little open mouth with upper front teeth line, I know it’s a bit brave with using a less neutral expression, but I really wanted something cheerful and hyper for Riō. 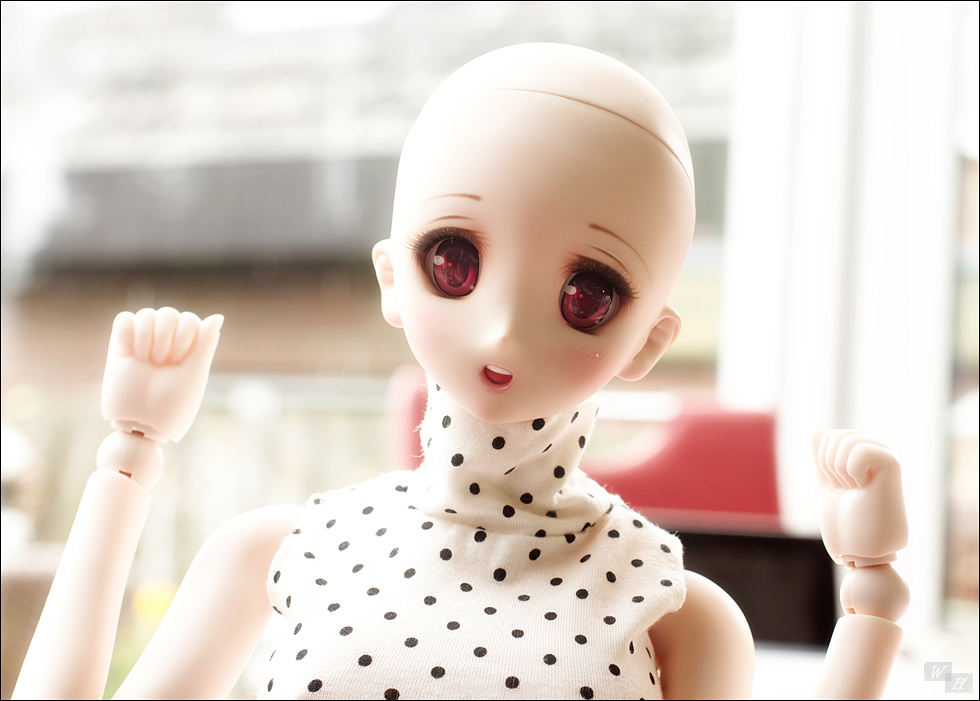 I know the face looks similar to Sonico, but please refer to her as Riō ^^ Actually I wanted her head to look very similar to the Super Sonico design. I’m very happy with how this commission turned out, Clockwork_Angel did a wonderful job. Riō is  a DDH – 06 with 24 mm eyes, the big eyes give her a young and very cute appearance, like I had in mind with this commission. The eyes were made by KK WORKSHOP coincidentially are based on a Super Sonico illustration. 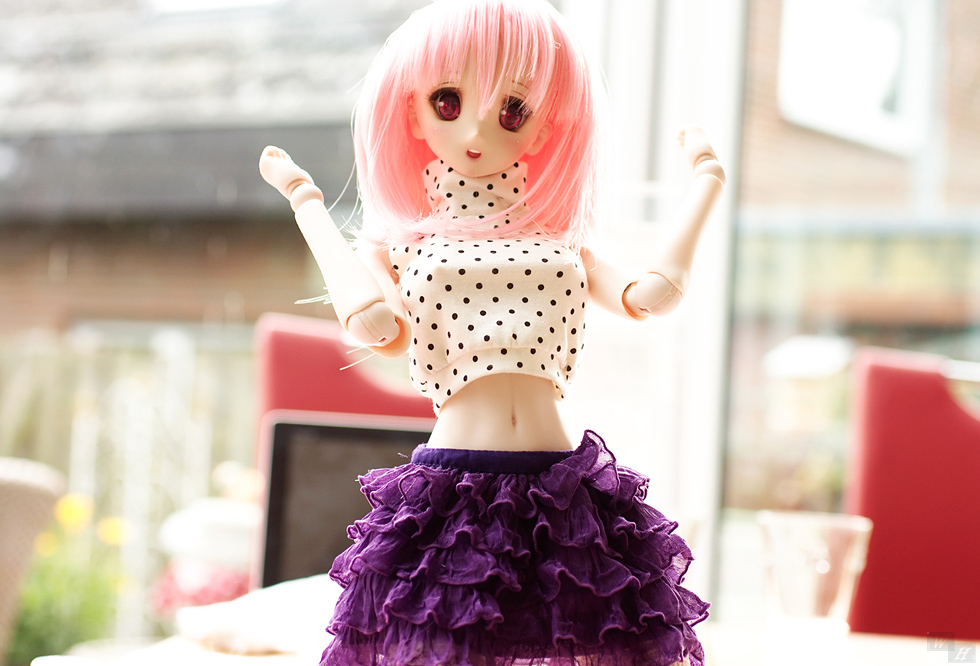 At first I thought I could just put the head on Mirai’s SmartDoll body, but after I gave it some more thought, I scrapped this idea as too cruel torwards Mirai, to me it’s more than a “pretty clothes rack”. So the new head gets an own body, I ordered it in parts from Volks.jp to my surprise everything was in Stock to assemble a Dollfie Dream Sister in semi white skincolor.

I decided for DDS size, since I like shorter legs in general and although not “blood related” I wanted Riō to be a kind of younger sister for Mirai. Here a list of the parts, except head.

I actually waited for Volks to release their One-Piece Torso, to complete my DDS project. It’s a very pretty part without upper body gap at the Doll it creates a more aesthetic look. It’s also quite flexible and the outer skin is surprisingly soft. I fortunately could acquire one piece, there was a high demand for it, actually I had to wake up at 05:00 in the morning to place my order *orz*.

To reinforce her arm and leg sockets, I also equipped the body with a DD Fortified Aluminium Alloy Sheath Set.

The wig I intended to use turned out as too small, some time ago Miette gave me a pink wig, I cutted it in a desired shape. In the future, I consider to give her blond hair or a crazier pink. 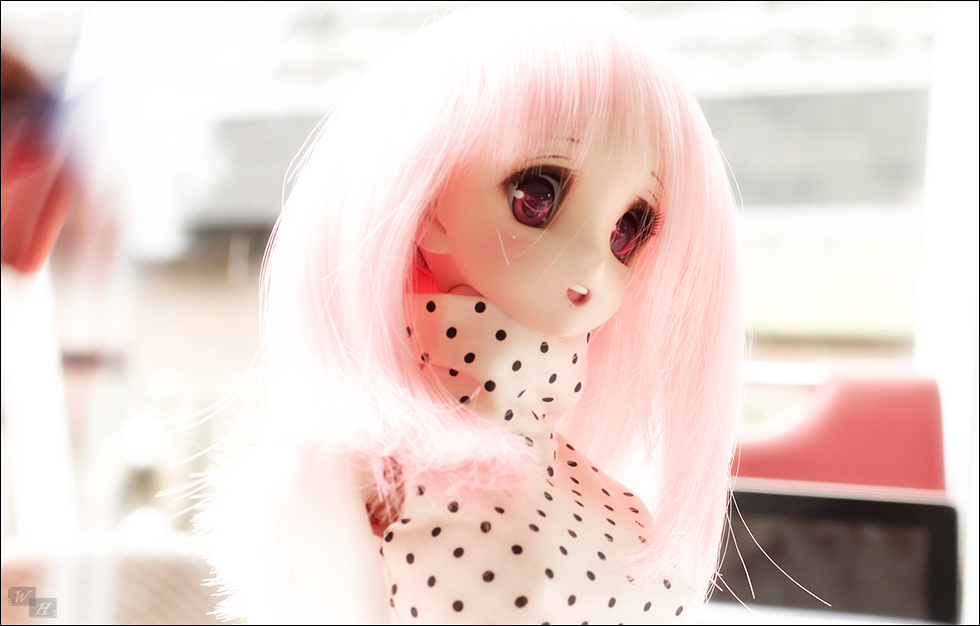 So far Mirai has been a spoiled only child, I guess she won’t be happy to share her clothes with another Doll, but hopefully they will get along. I wanted to create a little picture story with Mirai meeting Riō. Don’t mind certain plotholes or awkward moments ;D! 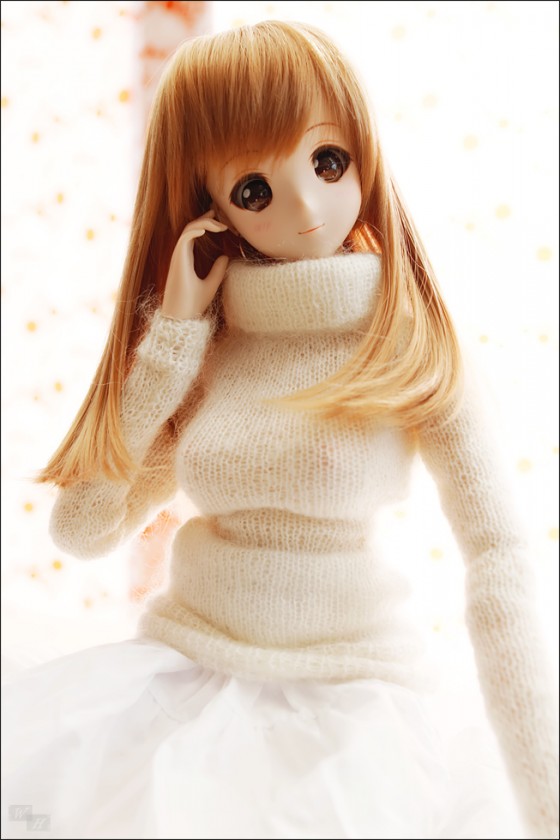 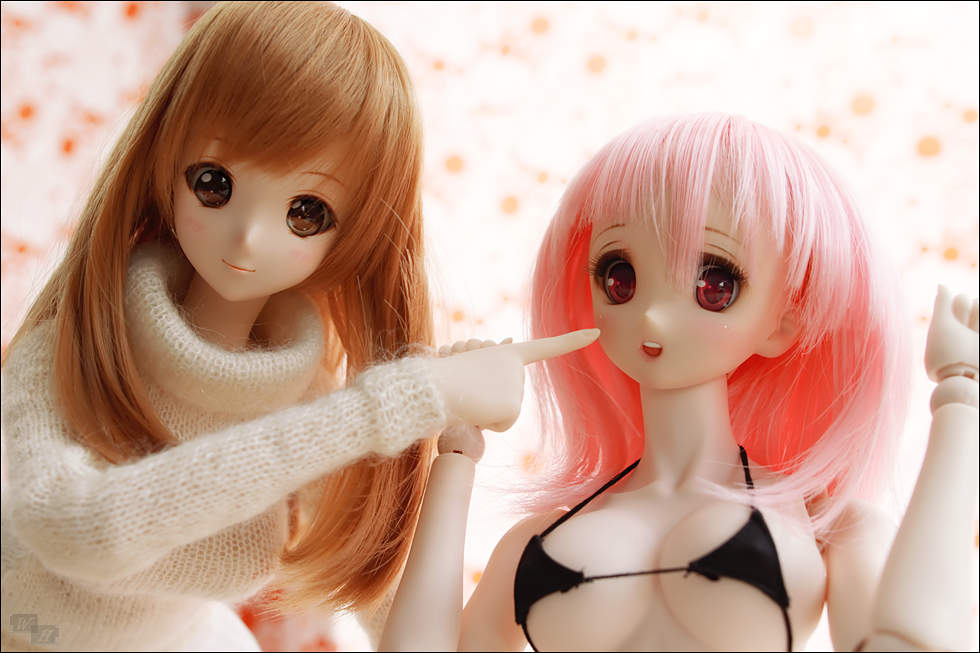 “Oh indeed she’s very cute, apparently she’s quite exited… can I play with her?”

And so this chaotic introduction finally ended 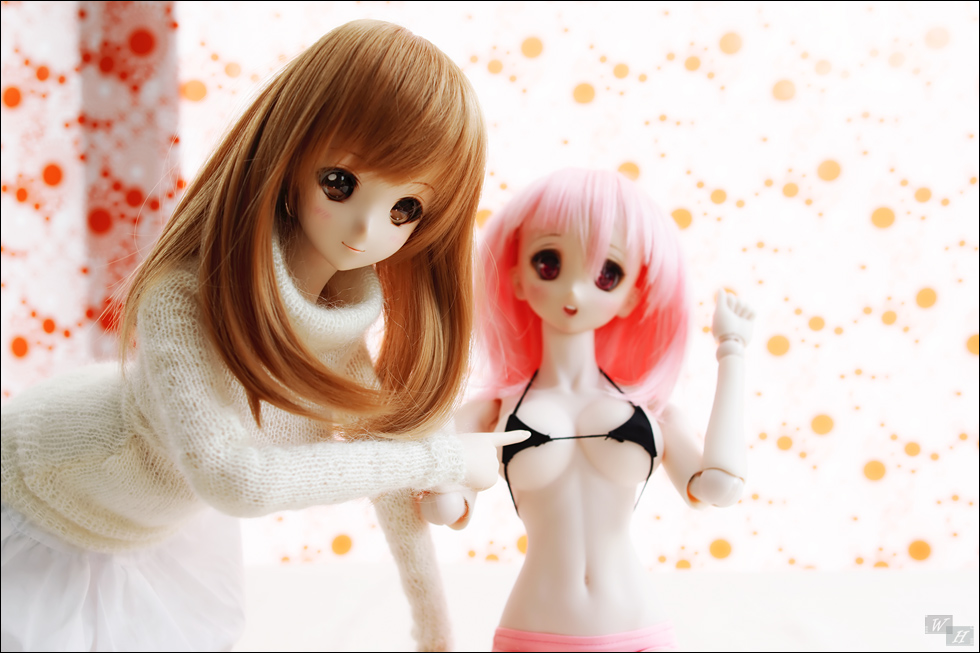 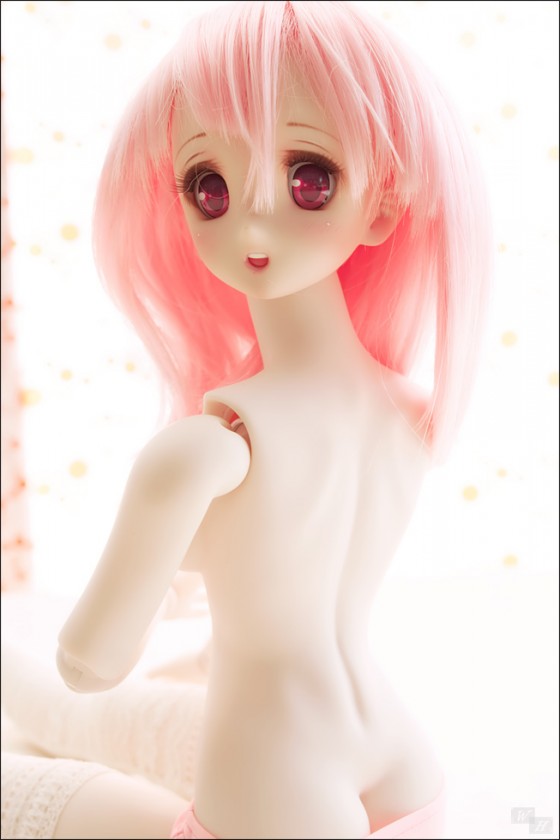 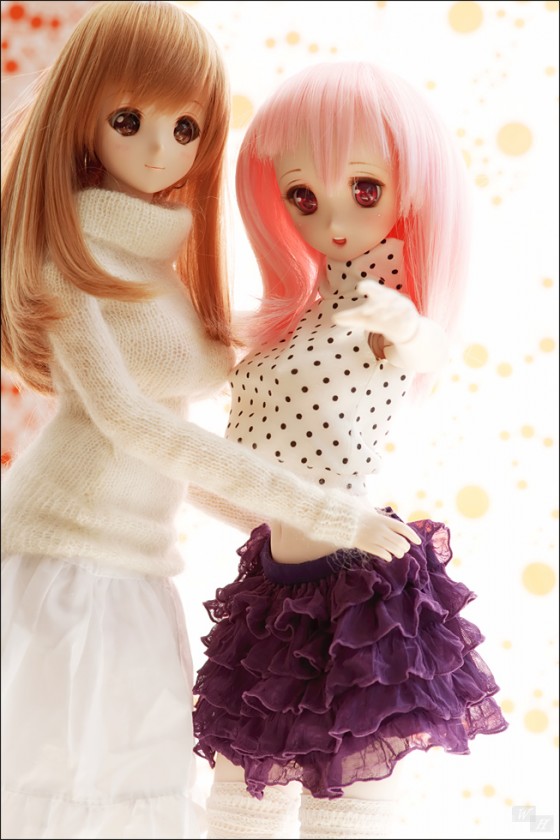 “Go Fabian, take a picture of your two beautiful ladies…fufu” 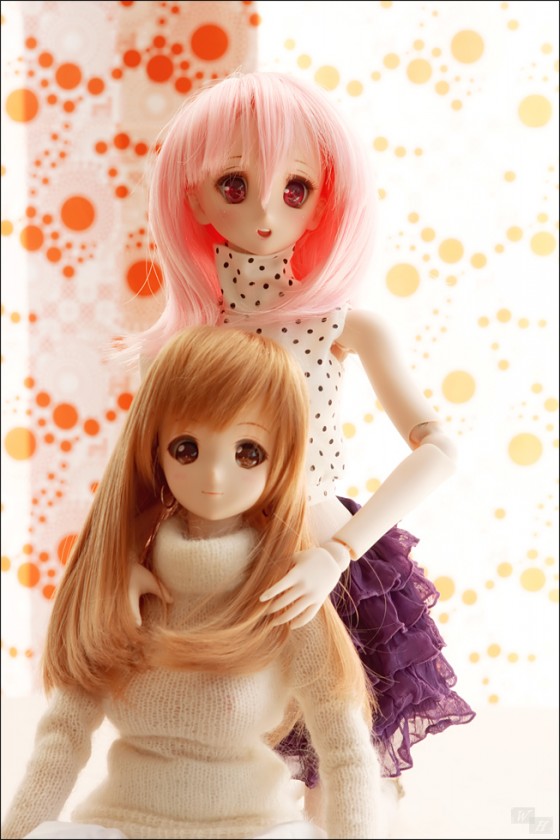 Nevertheless posing with two Dolls is a lot of fun. I really like Mirai and the new girl Rio is super cute. I’m very happy about the face up and also the Dollfie Dream Sister body is very pretty and flexible. I’m looking forward to take more pictures of them in the future… 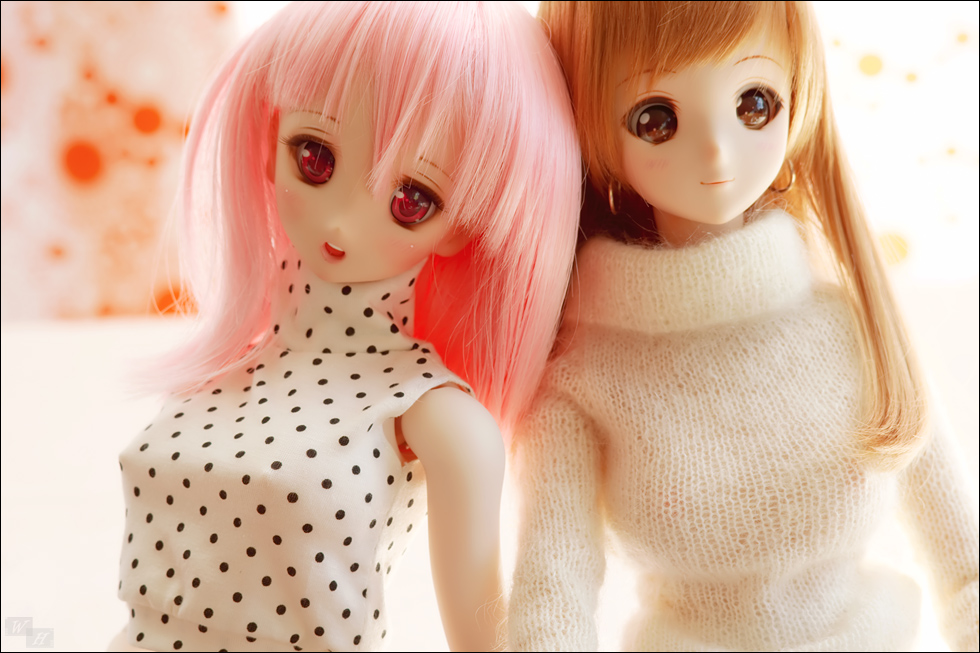