I recently got the opportunity to take pictures of a Bishoujo Senshi Sailor Moon Crystal figure.

German Tamashii Nations distributor heo gave me a friendly offer to send me a figure sample from time to time, to let me take pictures of them. I got this cute Sailor Mercury Figuarts ZERO from Bandai for starters. I was positively surprised to receive such a friendly offer and agreed. 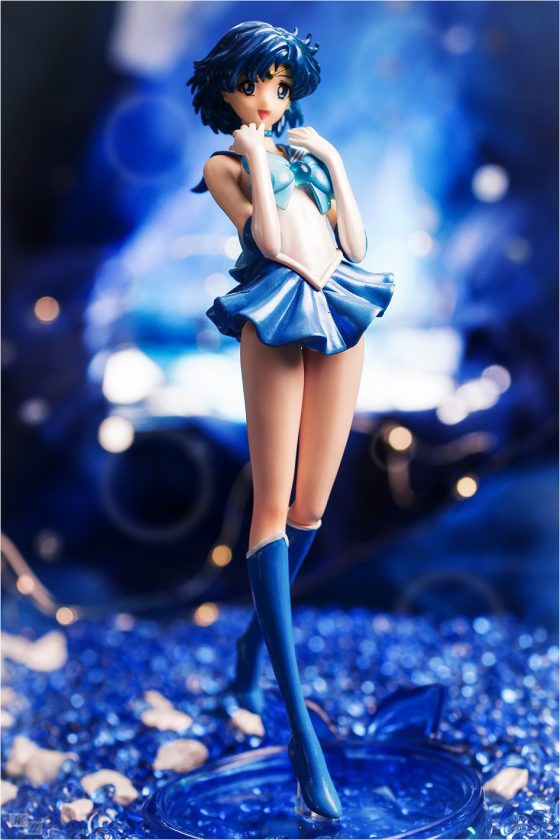 The Sailor Mercury figure was released in March 2016 and is scaled 1/10, she measures 18 cm.
In Japan she was apparently sold as Limited + Exclusive at Tamashii Webshop

I watched a bit of Bishoujo Senshi Sailor Moon Crystal anime, from my youth with the old Sailor Moon anime I can’t remember much. I liked the introduction episodes a lot, it was fun to see how much of a lazy  human being Usagi is. I did not complete the anime for several reasons… , but I learned that the show improved later on, so I might give it another try.

My favorite  episode in the beginning was the introduction of Ami Mizuno alias Sailor Mercury. At first she comes off as shy, smart bookworm, but when Usagi approaches her, Ami turns out to be a very nice and friendly girl. Yeah, I guess Usagi and Ami are my favorite characters. 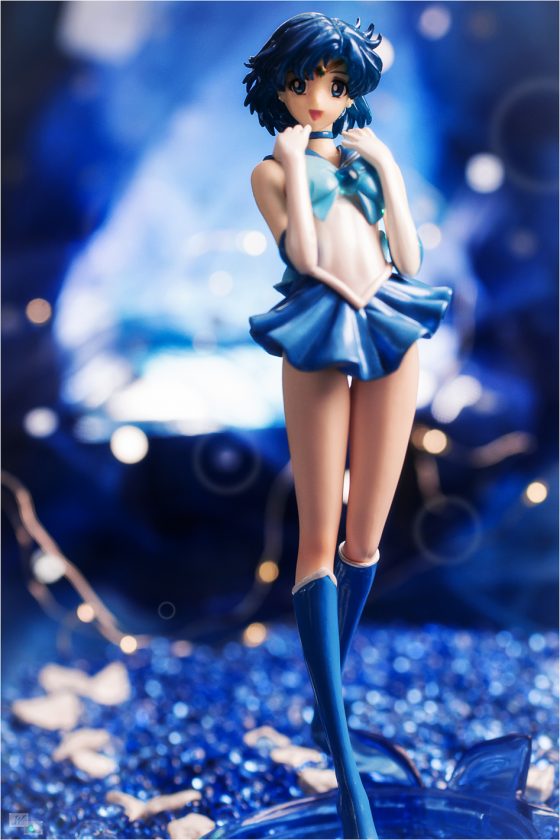 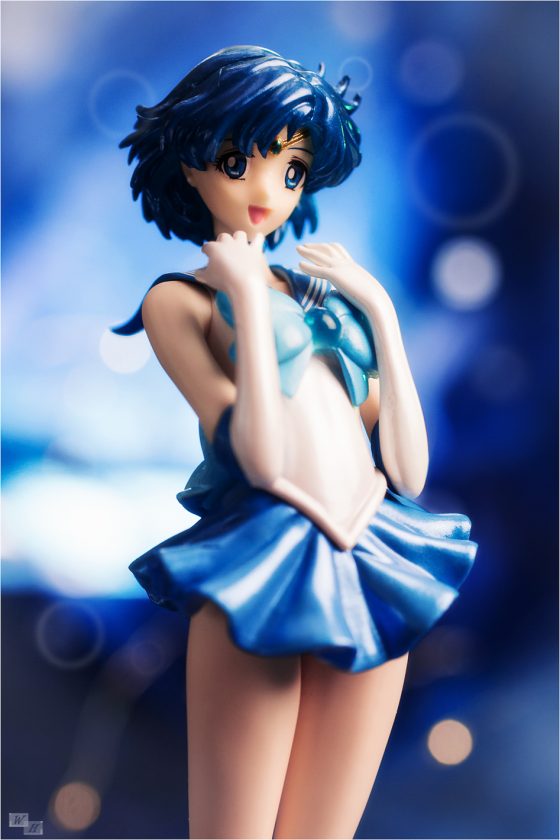 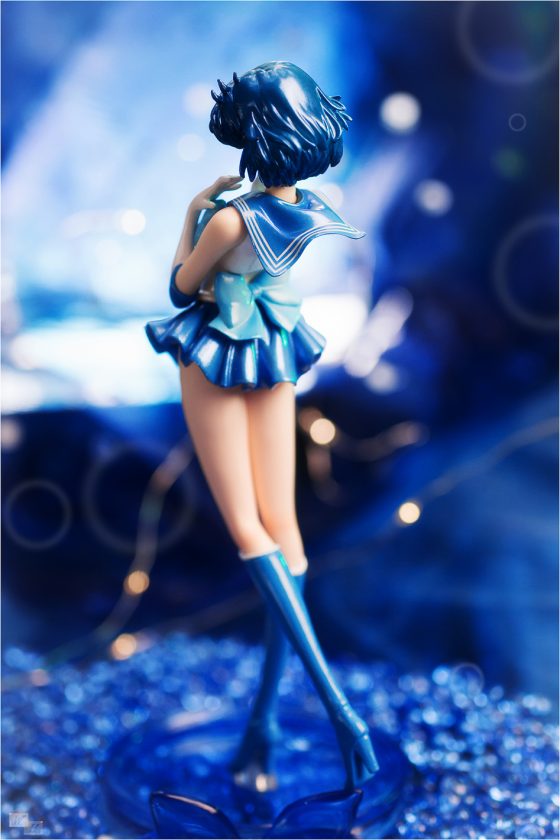 In 1/10 she is a smaller figure, nice looking and space saving as well. I think her pose was sculpted quite nicely, compared to the others her pose has a more cute atmosphere. Sailor Mercury’s body follows the typical Sailor Moon proportions, a long torso and even longer legs. 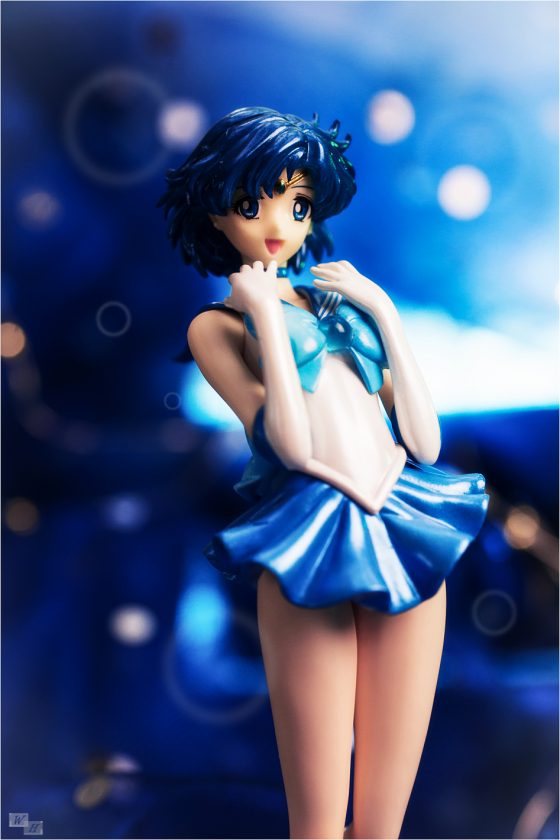 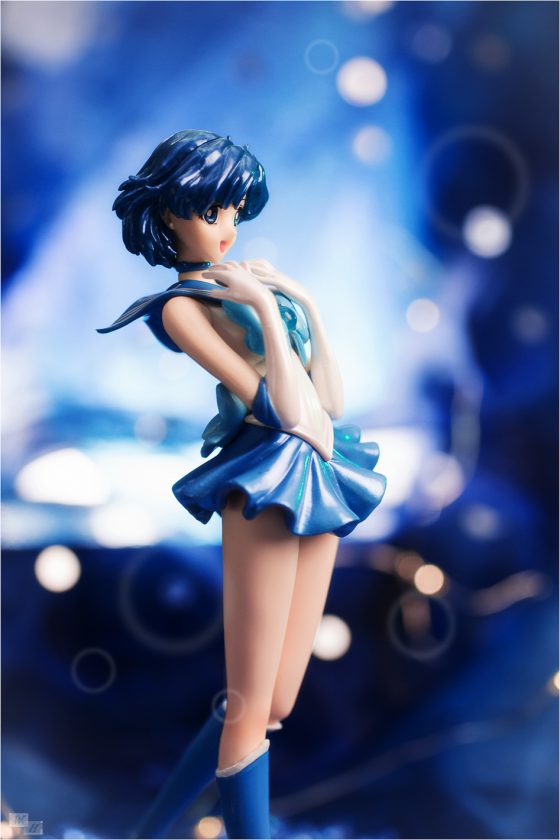 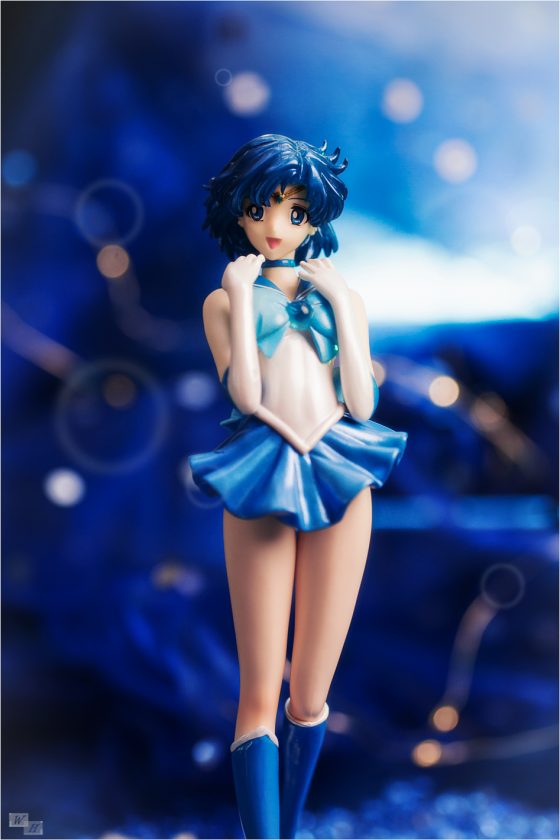 She has a pretty short hairstyle painted in shiny blue, considering the size, the sculpting of it is quite complex. On her forehead she wears a tiara, with a stone of her signature color, this is a tiny, but also important and nice looking detail. I really like her pretty and lively eyes. 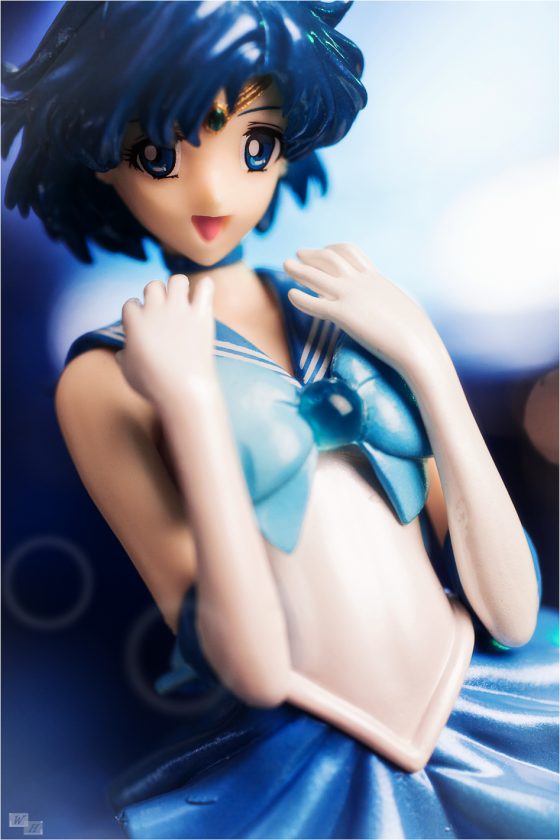 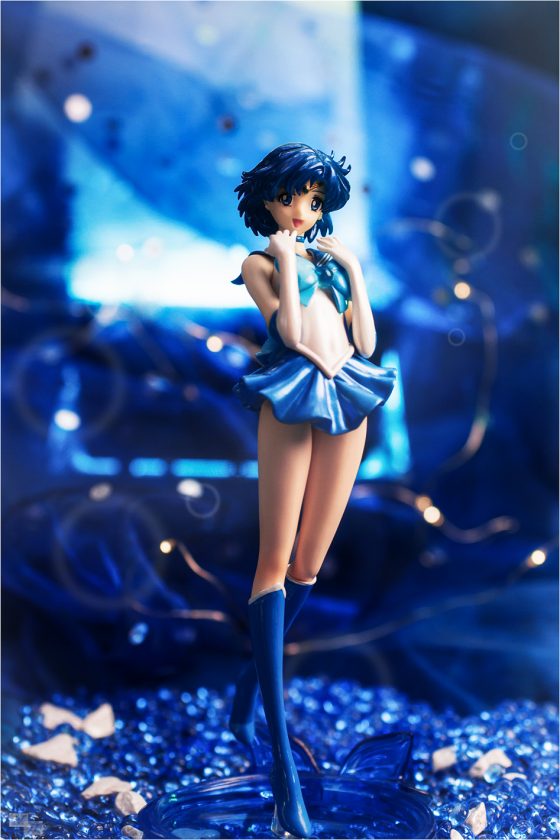 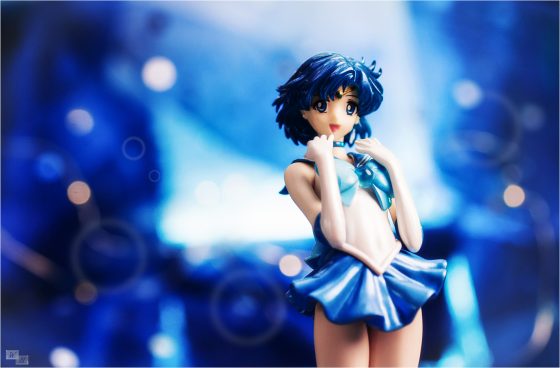 Her outfit looks pretty, the glossy parts and the metallic blue skirt are attractive. 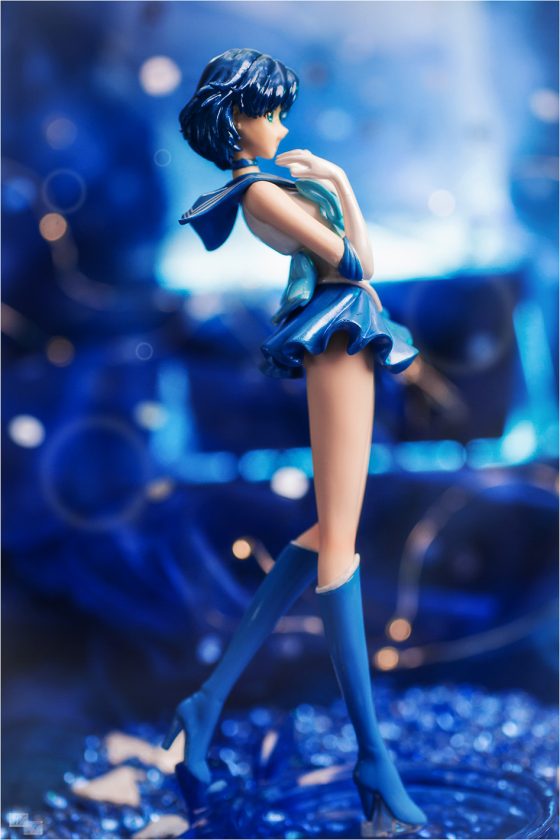 Sailor Mercury wears a sailor uniform collar combined with a white top, the lines on the collar are applied in a very clean way. The top has a big turquoise ribbon on her chest with a blue crystal in the middle. Below she is wearing a billowing, shiny blue skirt with a ribbon at the backside. The skirt has a dynamic design, as if the wind would blow behind. As arm decoration she wears white elbow long gloves. Her shoes ares blue knee-high boots with heels.

The figure has a nicely rounded transparent blue base with a ribbon. 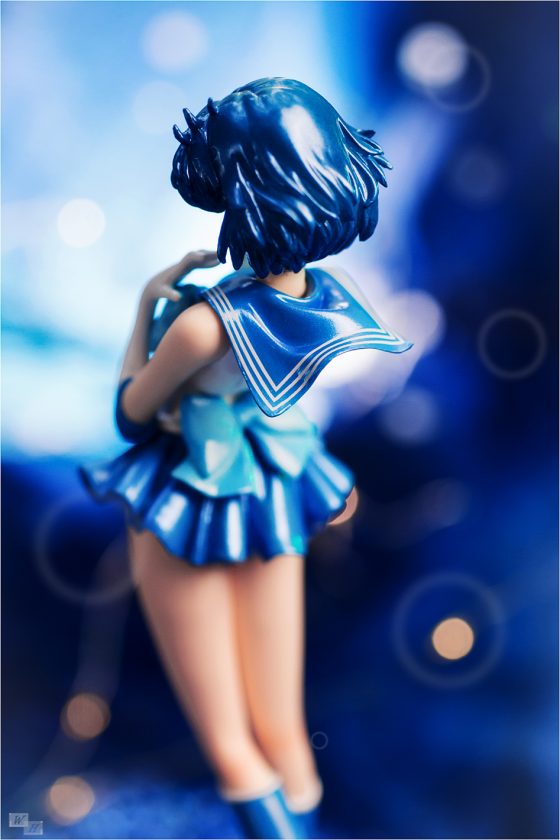 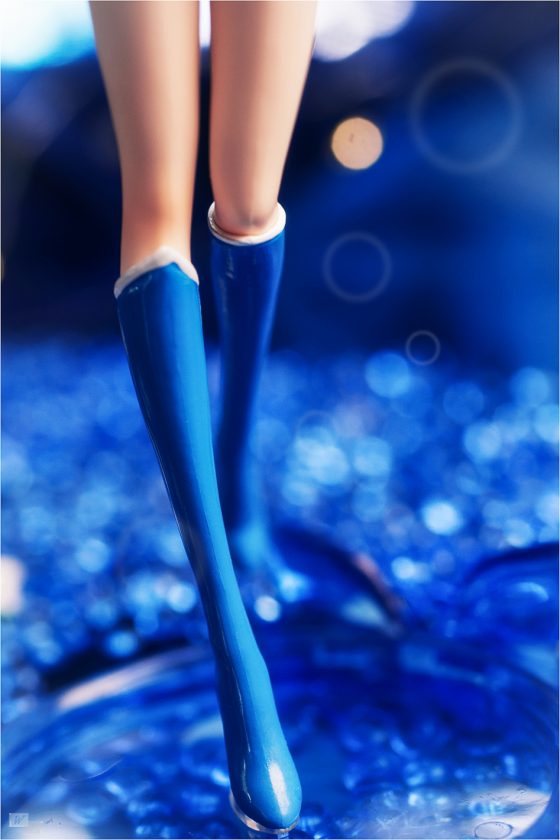 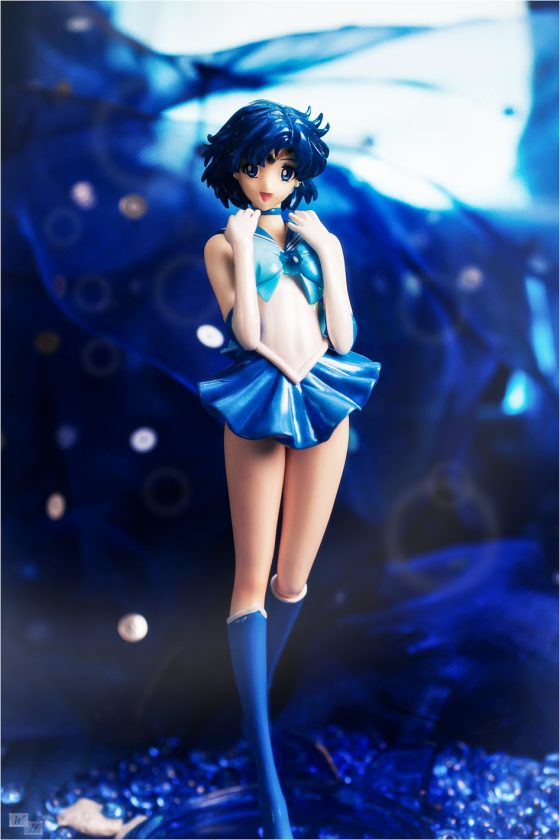 Sailor Mercury – Figuarts ZERO from Bandai is a nice small figure, pose and outfit are appealing and her hair is very good looking. The figure has really cute eyes and the tiara is a pretty detail on her forehead. A thing that could be slightly improved is the level of detail on her face. Anyway she is a cute piece of Bishoujo Senshi Sailor Moon Crystal merchandise.

Thanks again to the German Tamashii Nations distributor, heo for sending me the figure and giving me the opportunity to take pictures of this Sailor Mercury, it was fun. 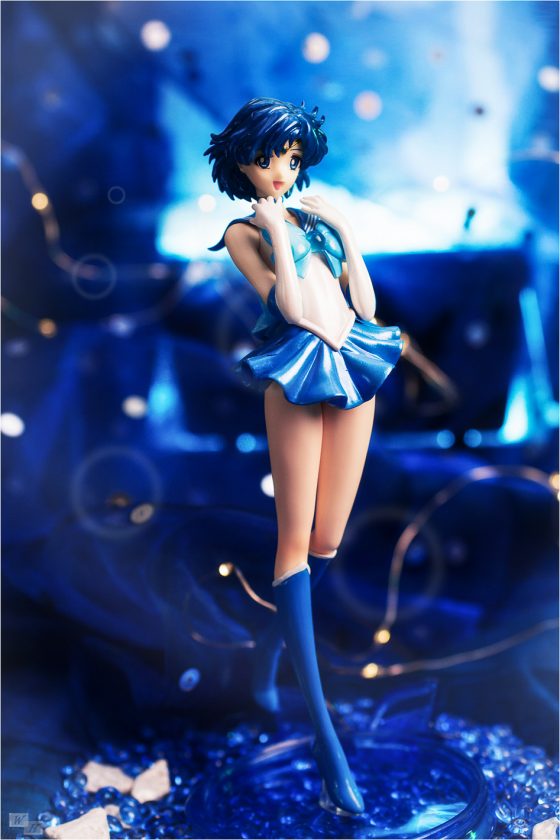 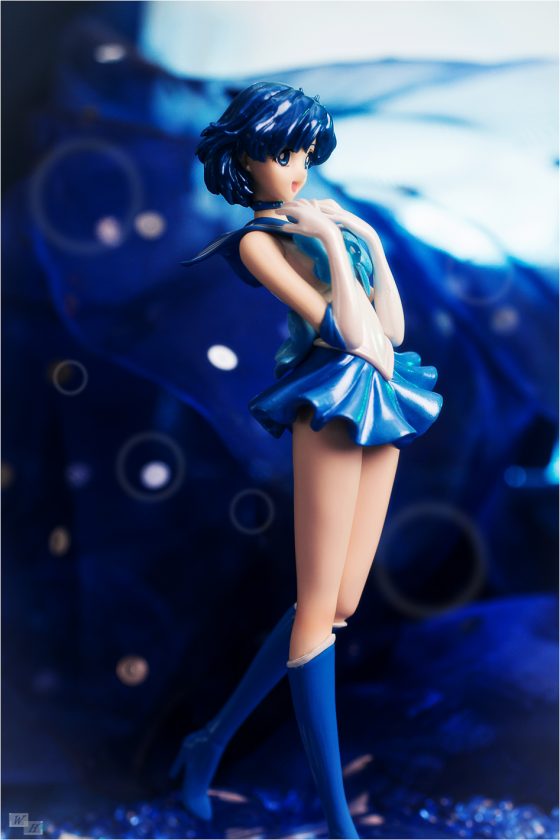 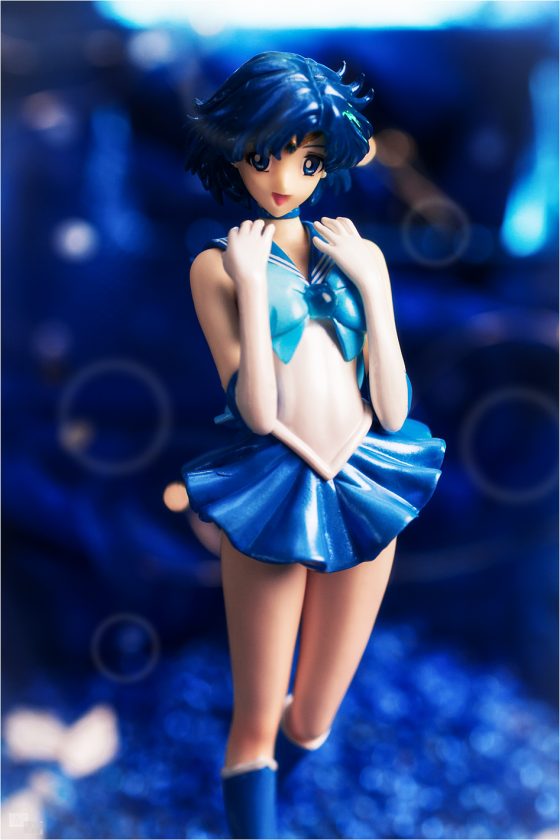