In late summer I got myself a wonderful Ichiban Kuji prize figure based on Kancolle, it was manufactured by Banpresto. It’s called Yamato – mizugi mode. It is a premium A prize figure. 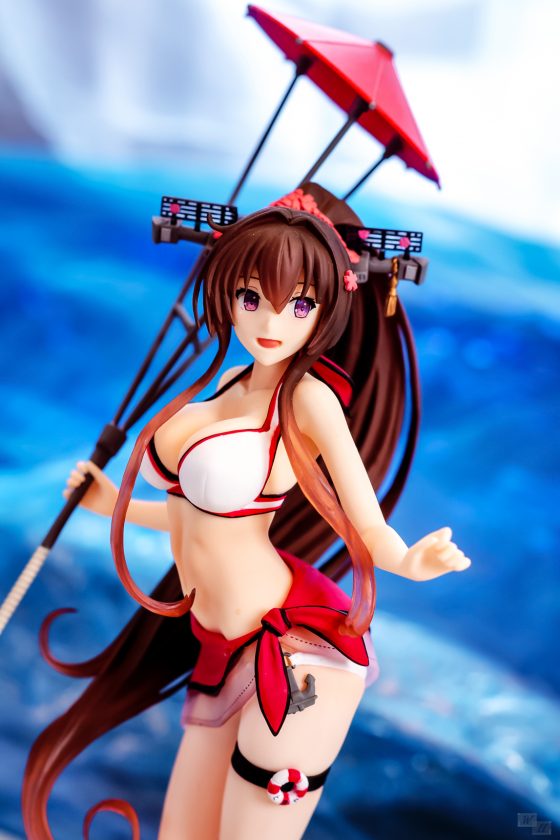 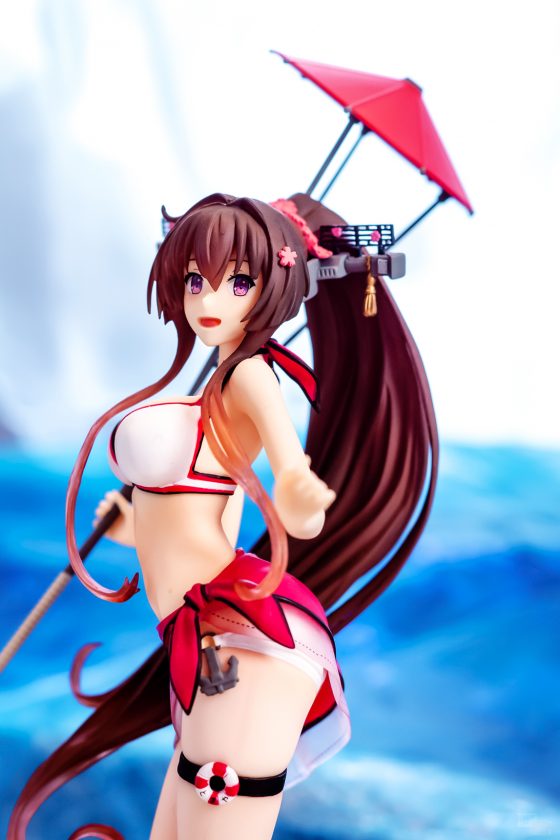 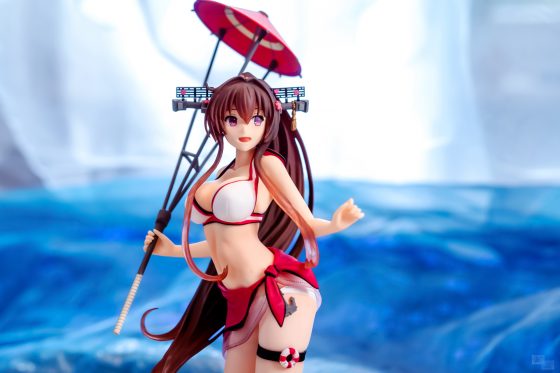 In general prize figures are affordable compared to regular figures, though somehow this figure appeared for a heavy prize in several big stores. I got mine for around 13.000 Yen.

…Yeah I know, but when I saw these lovely product pictures I could not resist. 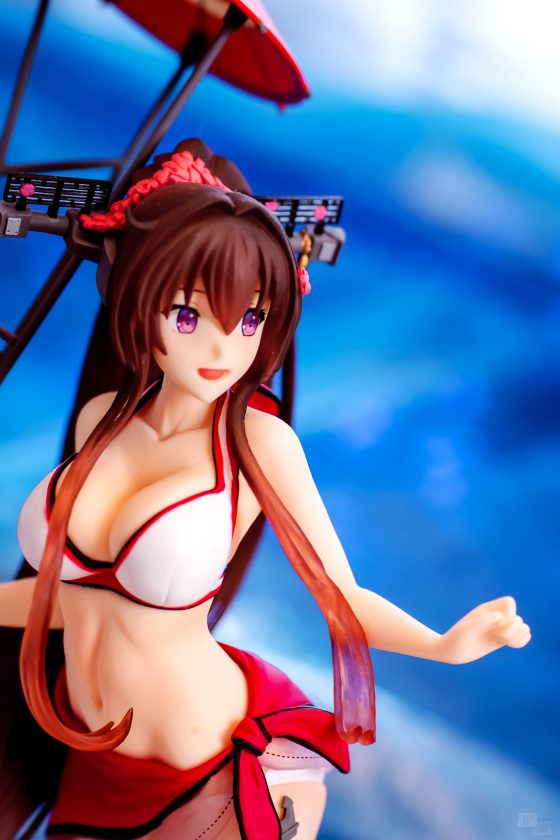 The origin of the figure is the always popular browser game Kantai Collection aka ~Kan Colle~.
In the game, Yamato represents the famous Japanese battleship from the WWII era. The Yamato was an ambitious project, in order to build the biggest and technically advanced battleship. It was mainly a prestige Symbol, before the end of the war, the Yamato didn’t take an active role that would risk the ship. She was often just docked in harbors and used as living quarters and the ship had more luxury interior compared to other ships, the ship received a funny nickname because of that. Yamato also had it’s own Ramune (ラムネ) factory inside.

The Yamato is very special thing for many Japanese citizens, even considering that the ship did not take part part in any big battle, aside from her last mission, which was simply an useless attempt. Still Yamato remained a symbol of hope and readiness to make sacrifices, also in modern media as “uchuu senkan yamato”, where the ship was the last hope of mankind.

When playing Kancolle I randomly get upset to know what really happened to these “shipgirls” in reality. Of course since Japan had a questionable role during WWII, the strangely positive glorification of the ships feels slightly awkward, because the reasoning behind Japan’s expansionary policy was wrong and the japanese navy wasn’t all that smart. Coming to terms with the past is not easy for any country, be it the victors nation or the losing nation. I often have the feeling that Japan feels honest remorse for their deeds during WWII, but on the other hand with shrines that are used for glorification of the military regime and war museums that don’t portray any atrocities, leaves a bitter aftertaste to Japan’s coming to terms with the past.

Since we talked a whole lot about WWII in school, I was thinking Germany did an exemplary good job in coming to terms with the past, but when I see the News recently, I have the feeling that all the efforts made by the state still don’t reach everyone.

Kancolle is not amoral, it mainly is a cheerful game with cute girls that are intentionally based on old ships. But the attitude of trivializing historical events is always a questionable thing. 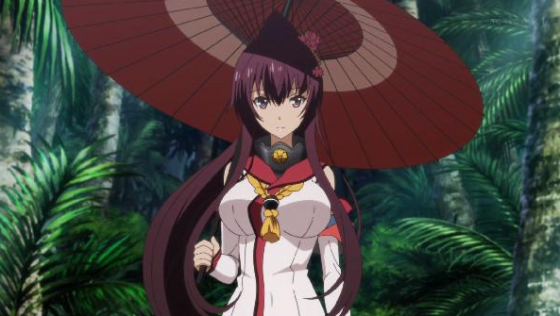 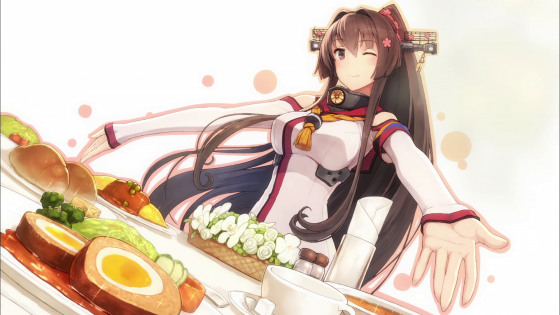 Her dedicated anime episode in Kancolle did a good job with portraying her character in a fitting way, Yamato is a tall girl with dignified elegance in terms of appearance and attitude, she is also portrayed as a really sweet girl with a friendly personality. The anime staff made a bit of fun of her, with showing her serving first class food and calling her a hotel. 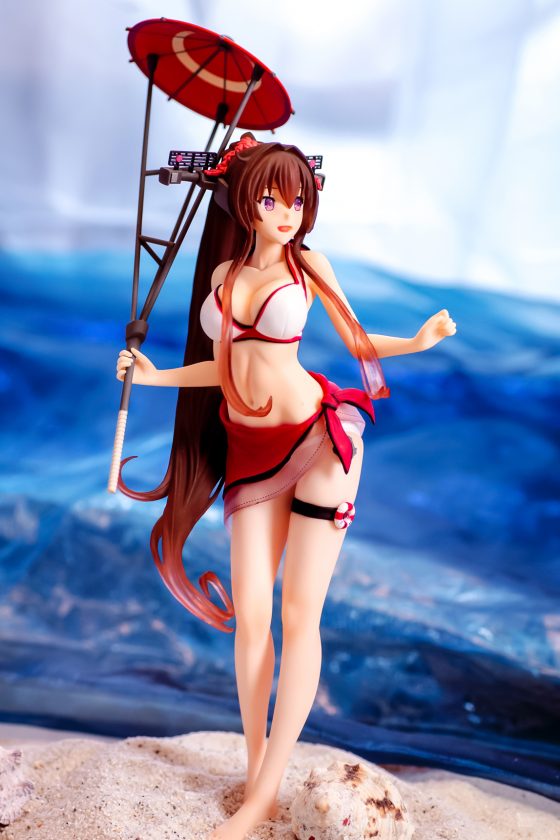 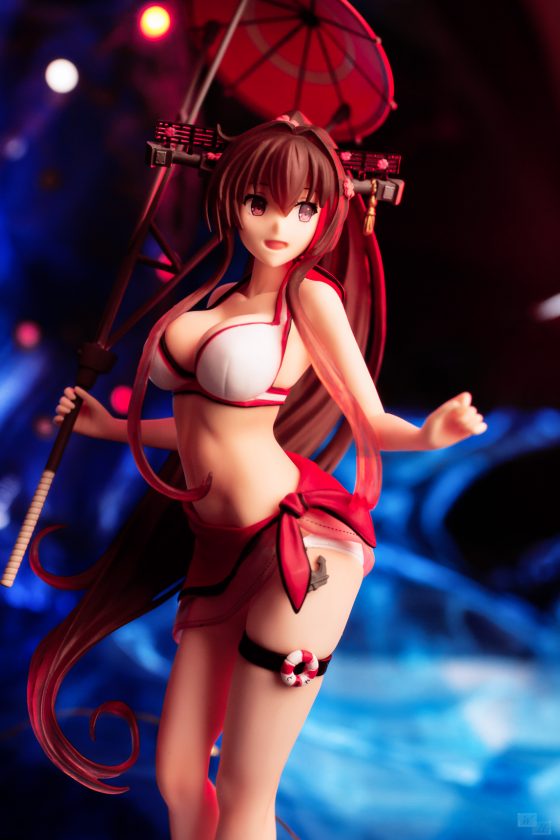 The figures outfit is based on the Seasonal Summer 2016 event from Kancolle.

Since I also used to play the game with pleasure, I limited myself to buy only figures of ship girl characters that I have in my own fleet. When I played Kancolle I fortunately  got Yamato quite early, after a weeks on first try in LSC (large ship construction). 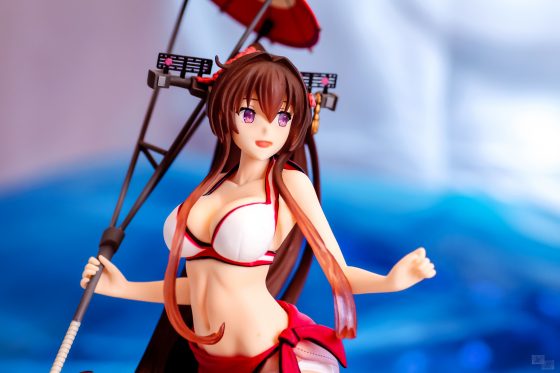 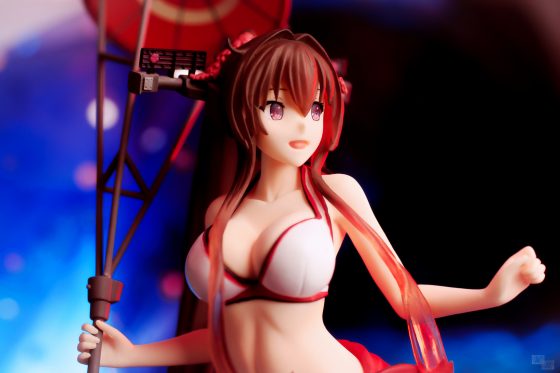 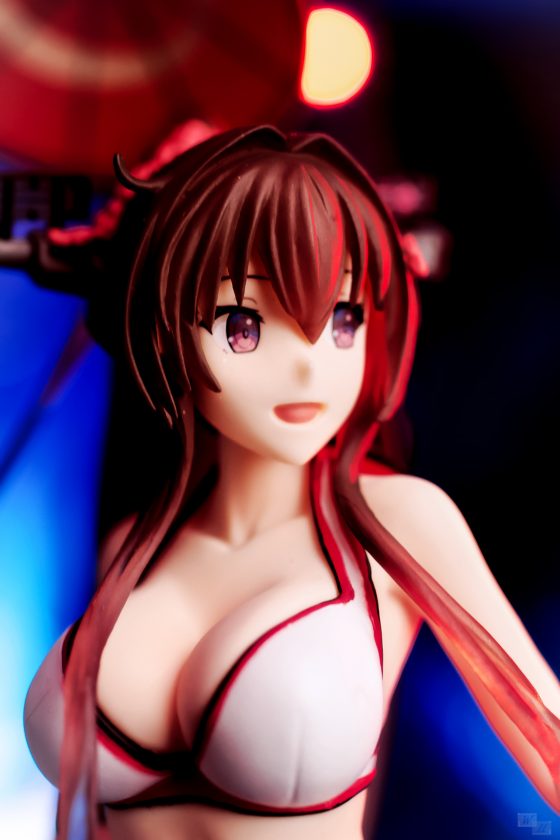 Prize figures are of course not as clean and precisely manufactured as their counterparts from ALTER, GSC etc. But they became quite good in quality recently. The reason for buying prize figures is nevertheless another one. Prize figures allow collectors and fans to have a beloved character portrayed in a unique fashion, be it an especially nice expression, unique pose or appealing outfit that is different from the figures provided by the big companies. 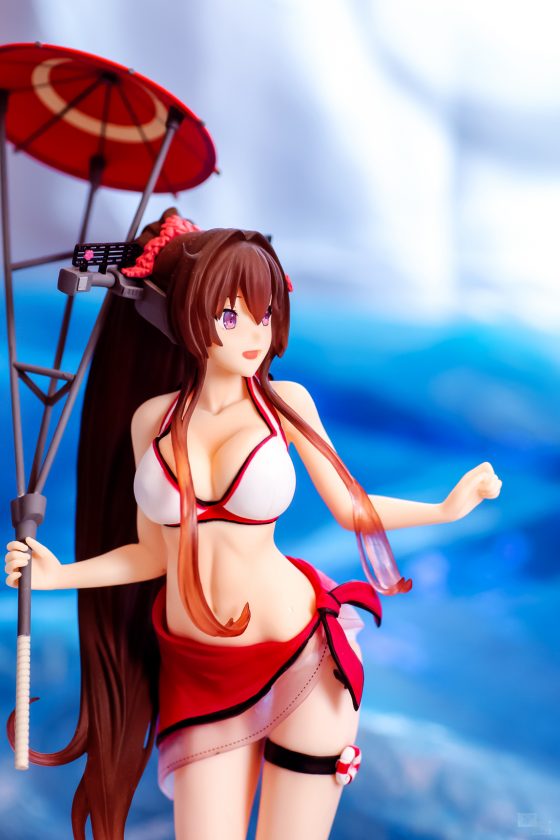 My Yamato looks very cute in her beach outfit, with her 24 cm in height, the figure comes without gun turrets, but she has a beautiful and quite detailed umbrella with an attractive industrial design. Yamato has a prominent head antenna resembling her battleship origin. 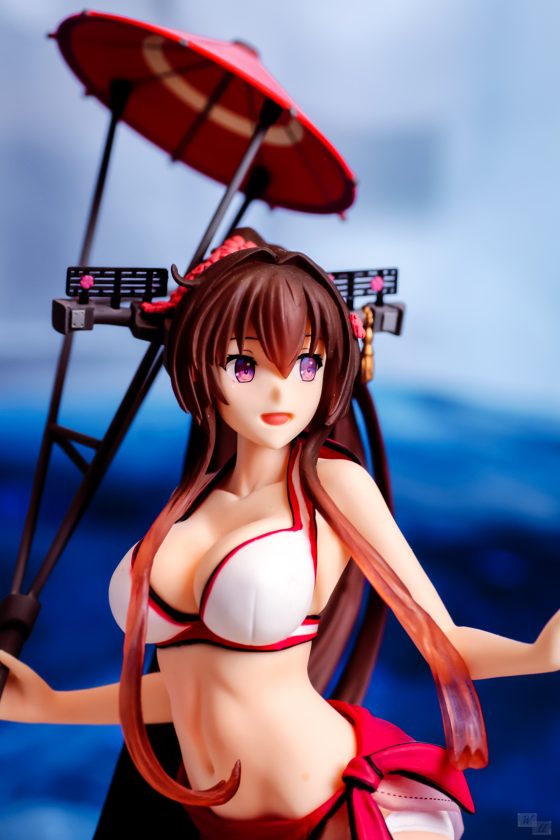 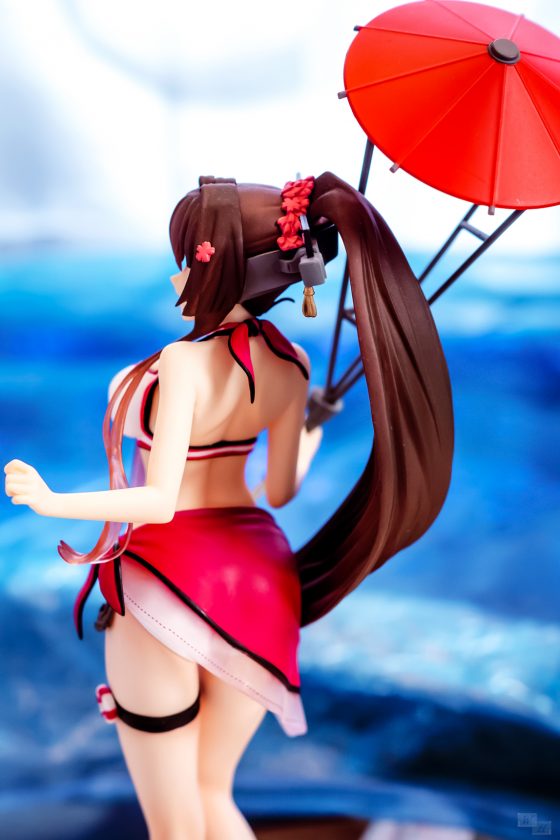 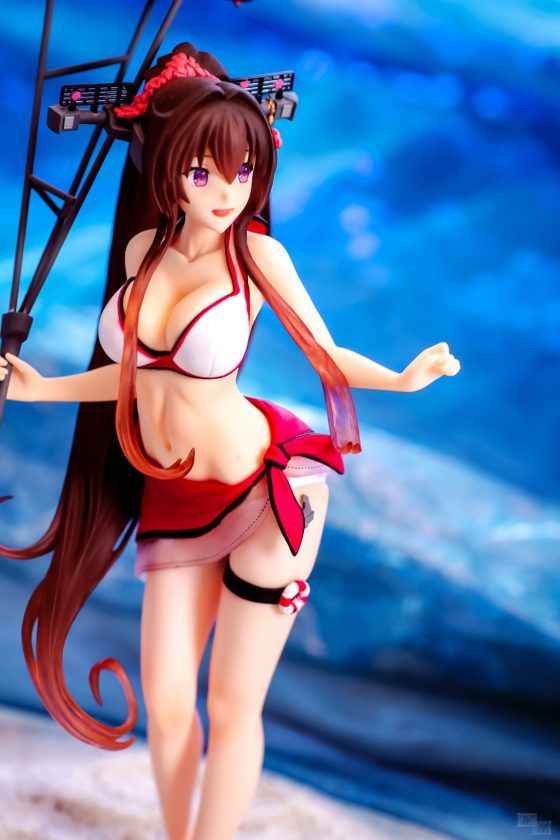 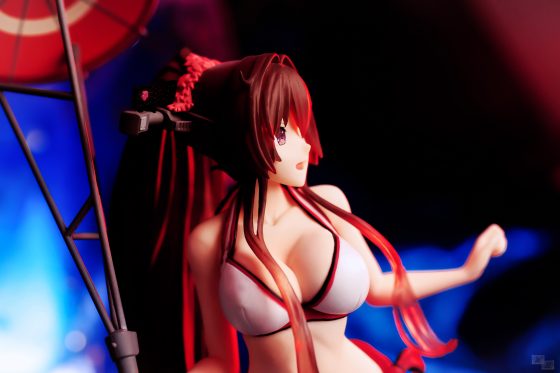 Her brown hair looks very good and the bangs are nicely styled, the strands look nice, a general roughness is there. The nicely swung big ponytail is decorated with cherry blossom petals, these details leave a positive impression. Overall her head has a nice shape, making her look very close to the ingame and anime design. The face turned out really pretty, it portrays Yamato in a cheerful mood with cute open mouth and beautiful eye decals. 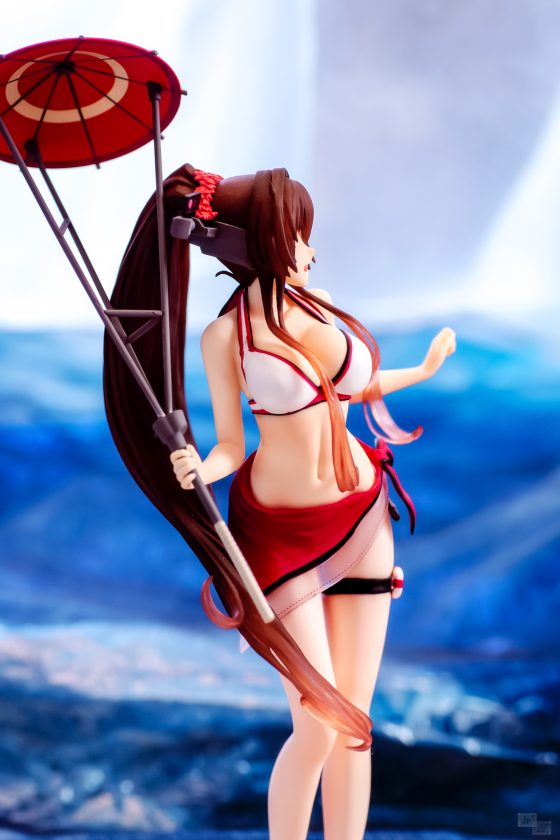 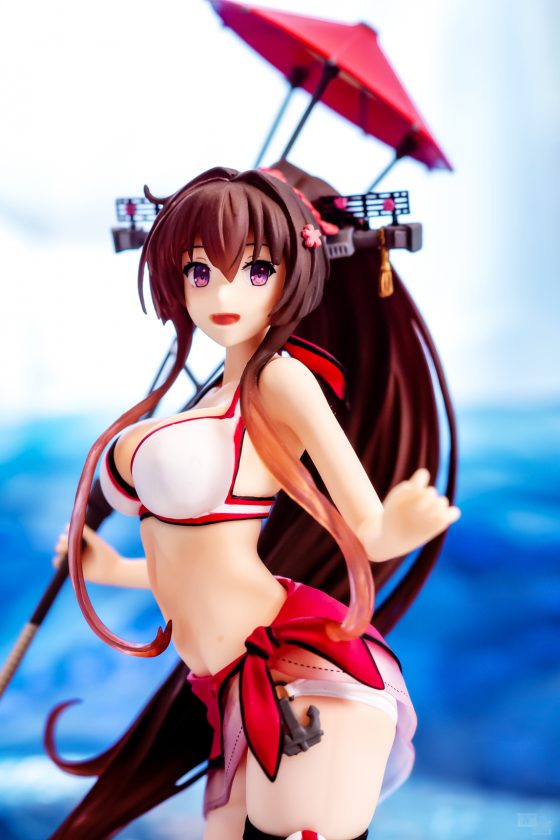 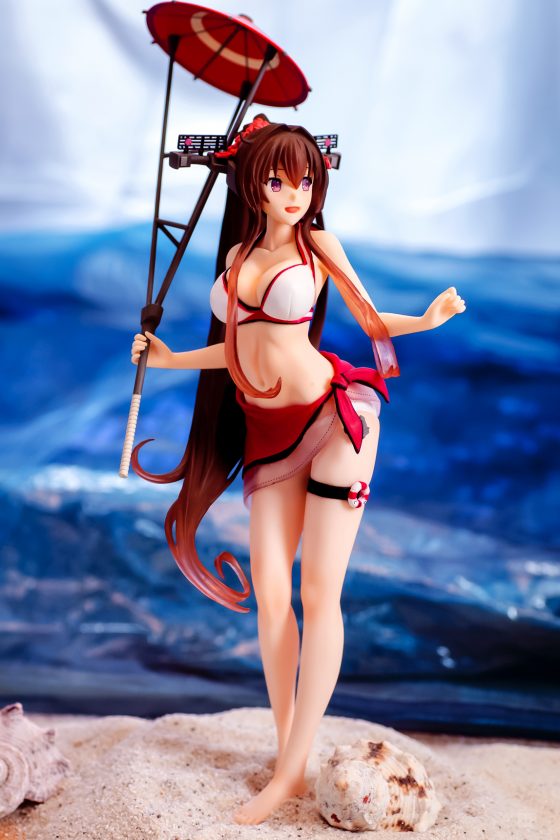 Next to a pretty face the figure also has a stunning and attractive looking body, it has an appealing balance between a muscular and a feminine, curvy look. Yamato is very tall, because of her long legs. The pretty girl has an ample bosom and a very detailed midriff, the body was sculpted nicely and additionally her backside with these scapula’s is really sexy ❤️. 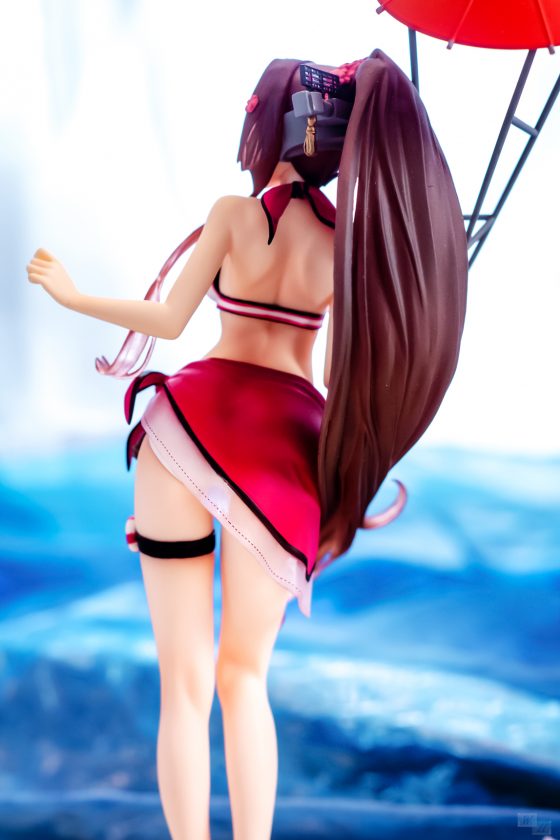 Yamato wears a bikini in white and red colors with black stripes, that doesn’t reveal too much. It is a decent beach outfit. The top supports her main artillery in a gentle way. At the hips she has a pareo wrapped around her. It has one red and a transparent layer and underneath she wears a white bikini bottom. It is closed with a little anchor, it’s a nice little detail as well as the small garter around her left leg with a small life belt attached to it. The paintjob on her bikini top is a bit rough, the other areas are passable. 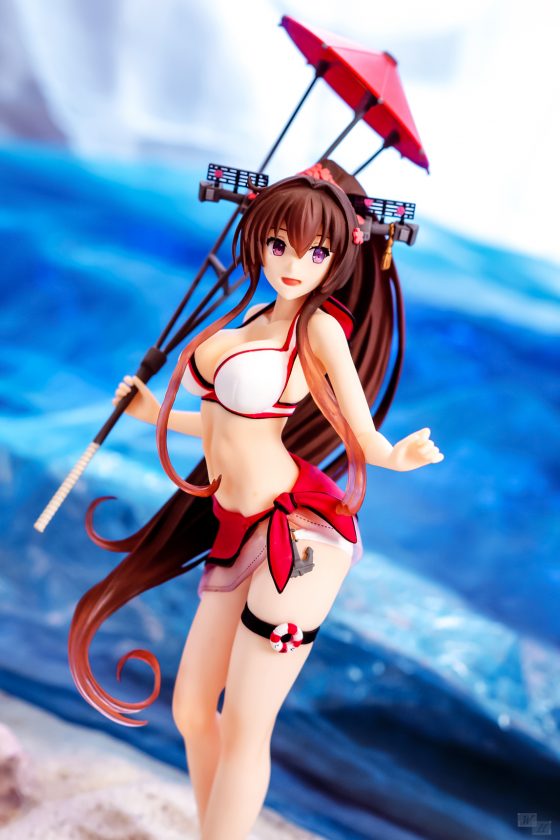 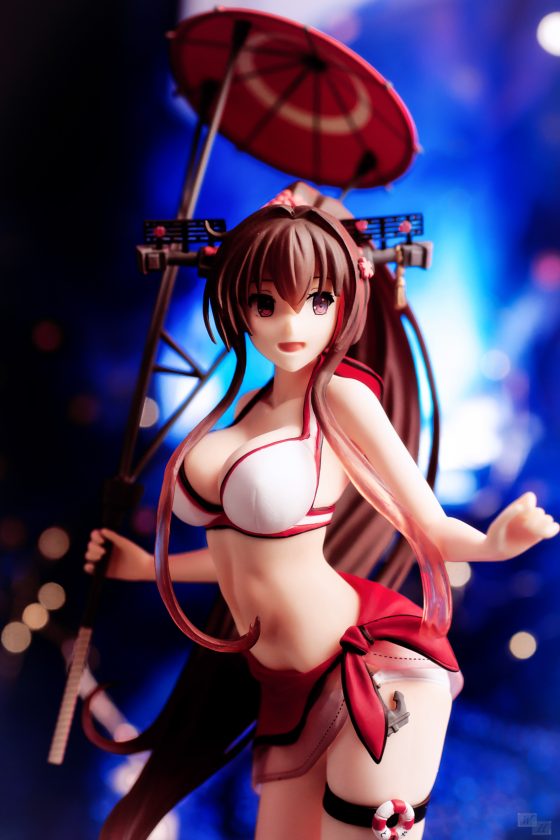 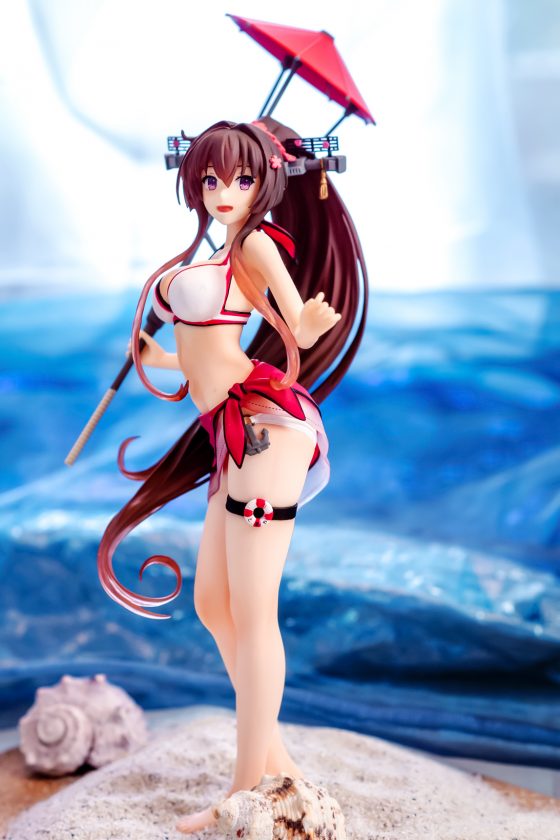 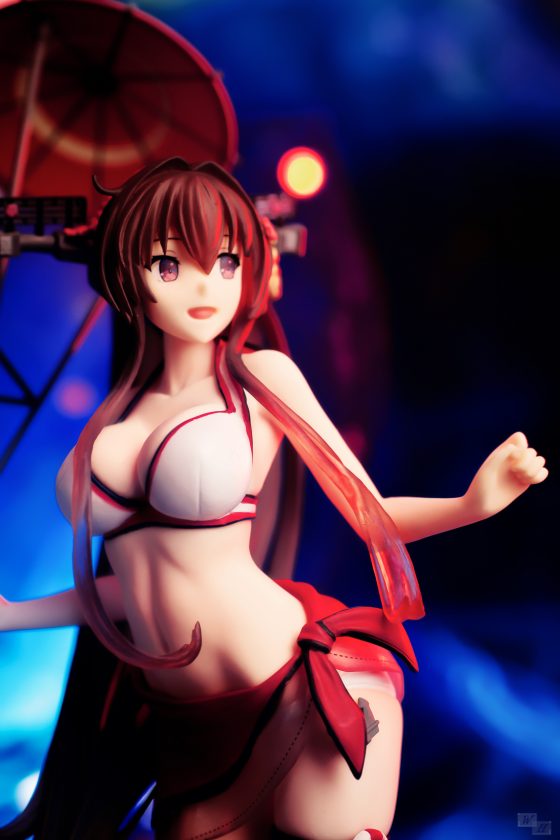 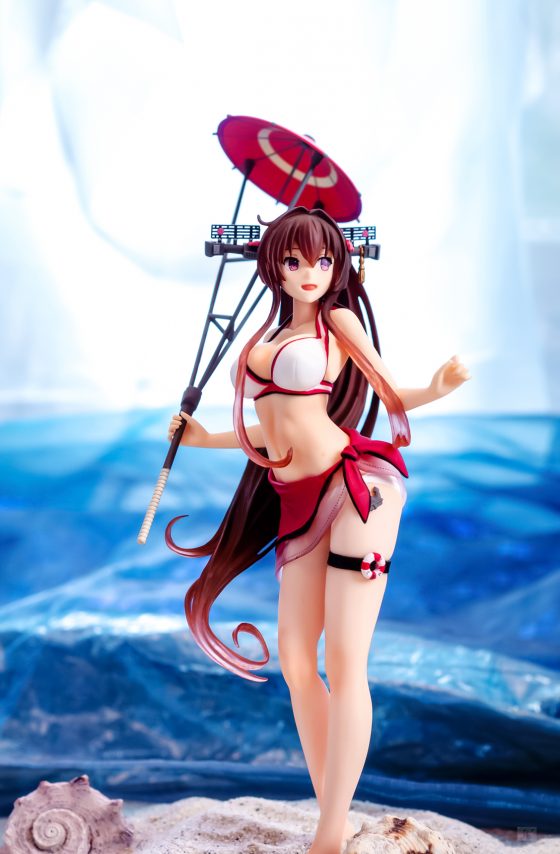 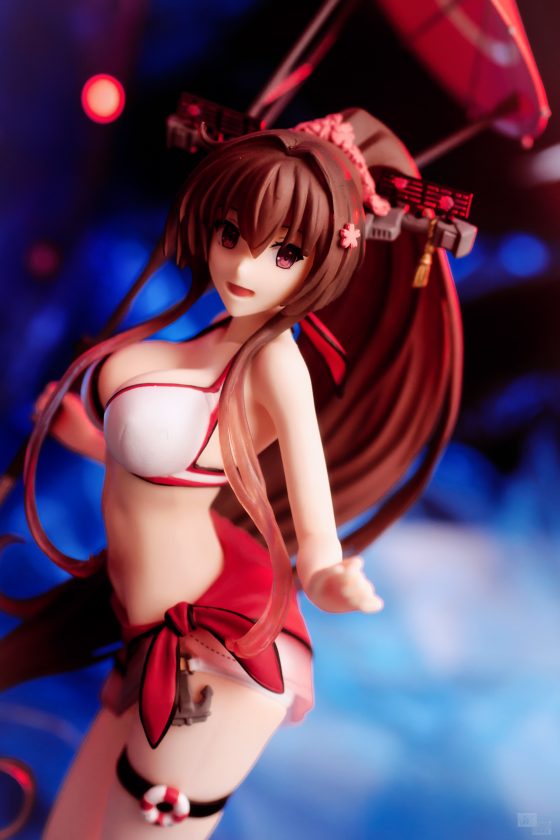 I really like this Yamato – mizugi mode figure, this adaption turned out very cute.
Her rather big  size and the standing pose give her a beautiful and graceful atmosphere.
The pretty and long hair looks quite nice on her also with a little roughness at the edges.

The umbrella is a cool accessory, I like how it increases Yamato’s ladylike presentation. Her cute face, articulation and the sculpting of Yamato’s body are really great. On first look she doesn’t give me the impression of a prize figure, but nevertheless, a few minor things that could be slightly better are there, it mainly concerns the open mouth which could have been sculpted a little sharper and the base, on my copy is a bit uneven underneath, one side is 2 – 3 mm higher and therefore it shakes a bit. 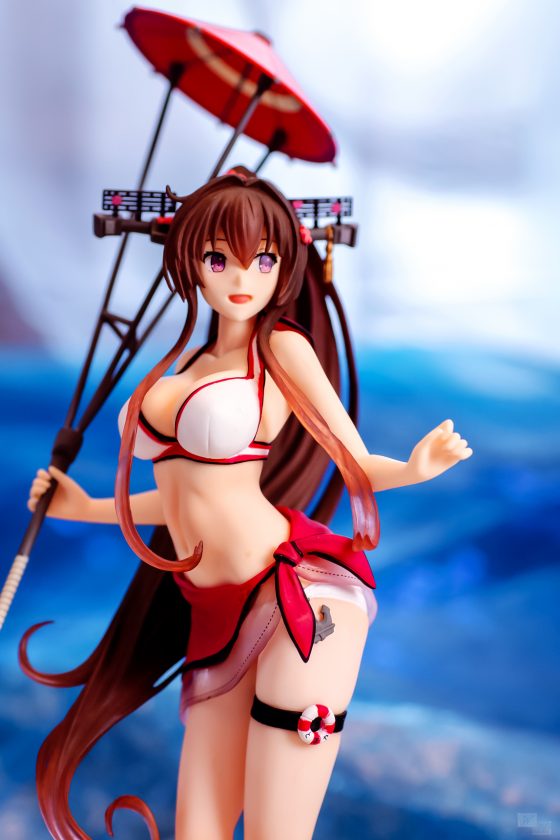