Hello everyone, today the figure of interest is Koizumi, Hanayo (小泉 花陽) made by Freeing. She is a character in Love Live! and a cute member of the school idol group µ’s. In her official school uniform she shows us her casual and pretty charm, she is a more or less simple but surprisingly nicely made figure. This figure is a bit different from usual purchases, but since I’m a Hanayo friend and supporter, I was happy that a pretty figure of her has been made. 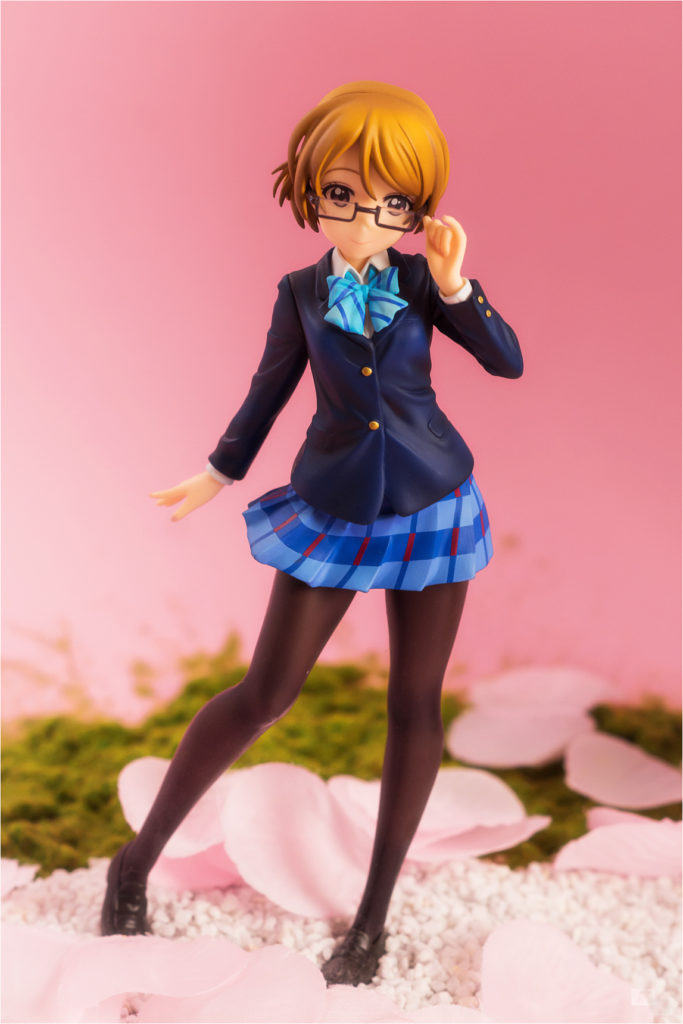 The figure was released in October 2016. Hanayo was manufacturered by the company FREEing and sculpted by Yokoyama (よこやま). The cute girl is scaled 1/8 and measures 19,5 cm. She was offered for affordble ¥9,074. 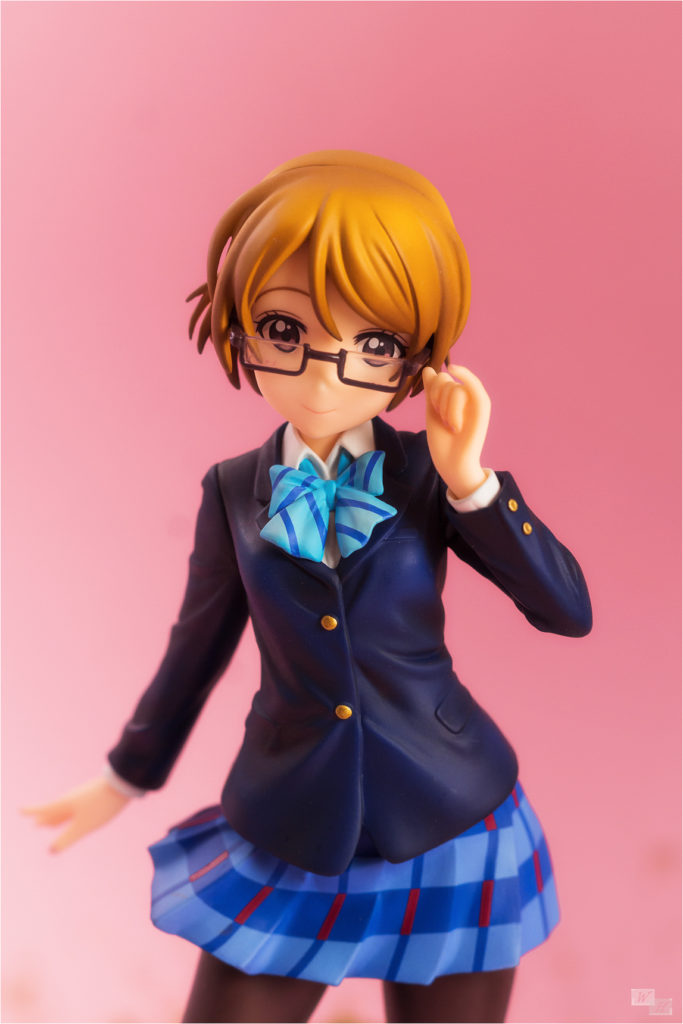 Figures of Hoshizora, Rin and Yazawa, Nico were also part of this lineup of three. 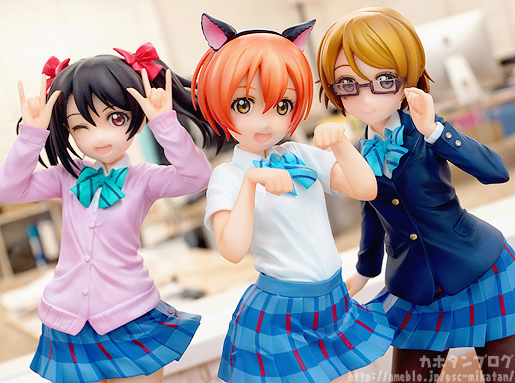 In general Hanayo is a shy and demure person, but she is an ambitious Idol fan. Deep down she wanted to be part of µ’s very early, but thought that she wasn’t good enough and had the wrong personality for it. Rin and Maki litterally had to drag her to the roof to make her decide to join the group, but actually Hanayo took the final step. Episode 4 of Love Live! School Idol Project season one was really great. Eventually, Hanayo can overcome her shyness and is able perform on stage with everyone on a same level. I really like Hanayo for everything she is, her looks, the cute behaviour and funny antics. Oh and her obsession with rice is just hilarious 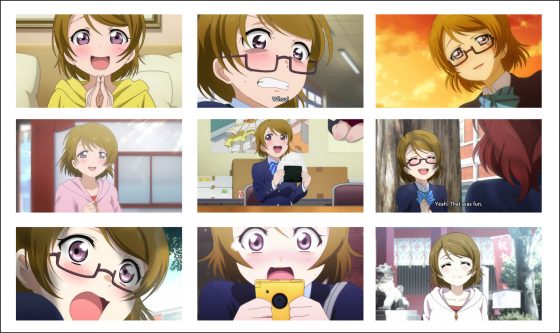 Hanayo looks perfectly like Hanayo in this figure adadaption from the good looking hair to the chin she has a pretty head. She is very charming with her beautiful eyes which are precisely printed and a cute mouth with her gentle smile.
I was really happy that Hanayo came with glasses, I like such figure a lot, Hanayo is my 2nd figure with such a feature. 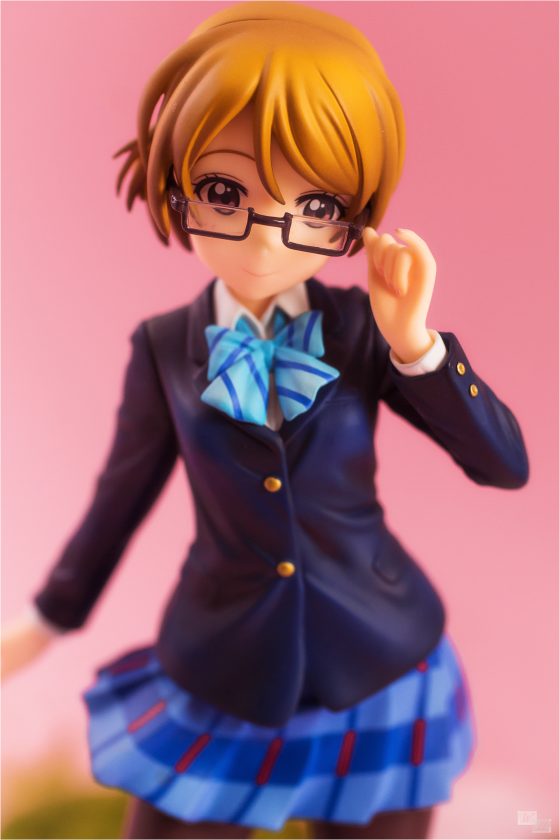 Often in anime media you see glasses as kind of beauty defect and to be exchanged with contact lenses and characters suddenly getting prettier, to me such such things are unnecessary, wearing glasses doesn’t mean that you are an ugly duckling. I always thought of glasses as fashionable item, also before it became an hipster item for people that don’t need it. Aside from being a big help for people with bad eyes it can give a certain look interesting or also attractive look to a person. Hanayo can also be displayed without glasses, but why should I do that? she looks gorgeous this way ❤️. 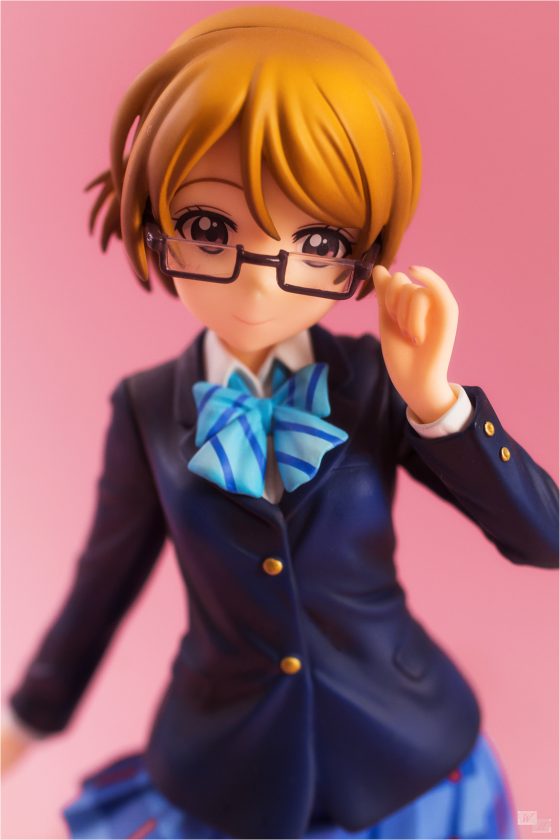 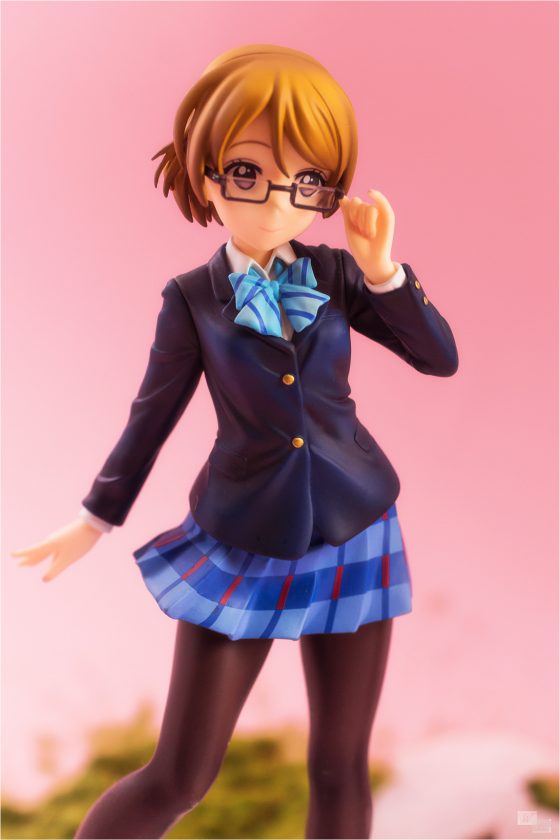 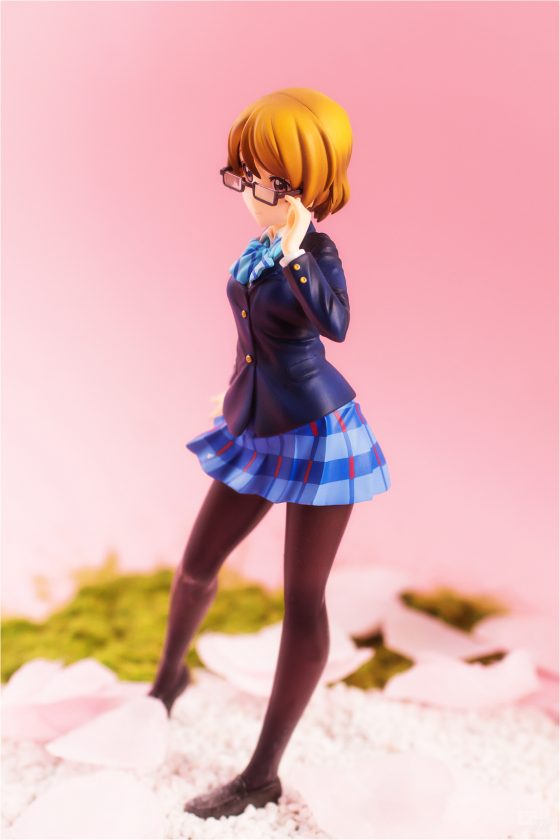 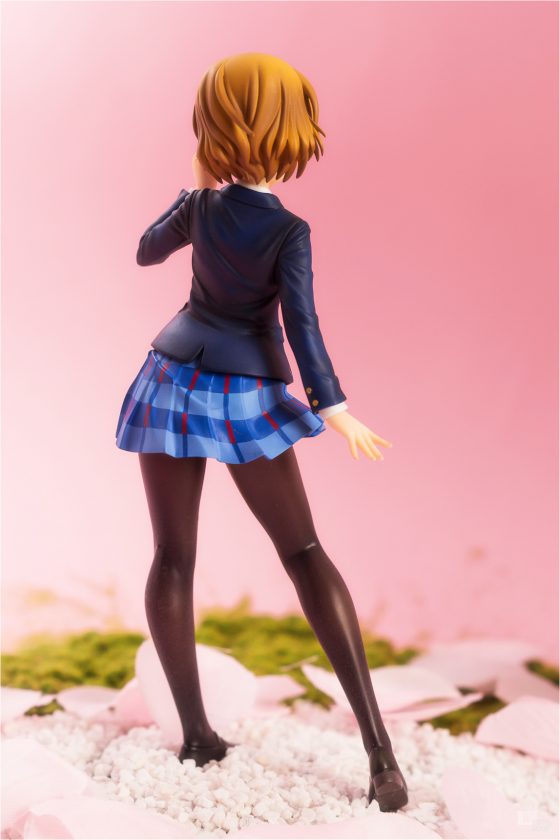 Hanayo’s regular school uniform set looks lovely, it was adapted faithfully and looks elegantly casual, the dark blue blazer with it’s dark shading has a convincing look, also the white collar and sleeves from the shirt below give it a lively appearance. Her skirt is painted in a lighter blue color it has a nice pattern, although it’s not as detailed as the blazer, it also looks good. The number of details and the texture give her outfit a very good and dynamic look, the cute ribbon around her neck and the golden buttons add the finishing touch to her appealing uniform. Hanayo likes to wear panty hose, the brown one suits her very well and the dark shading at the right places accentuates the girls beautiful legs. 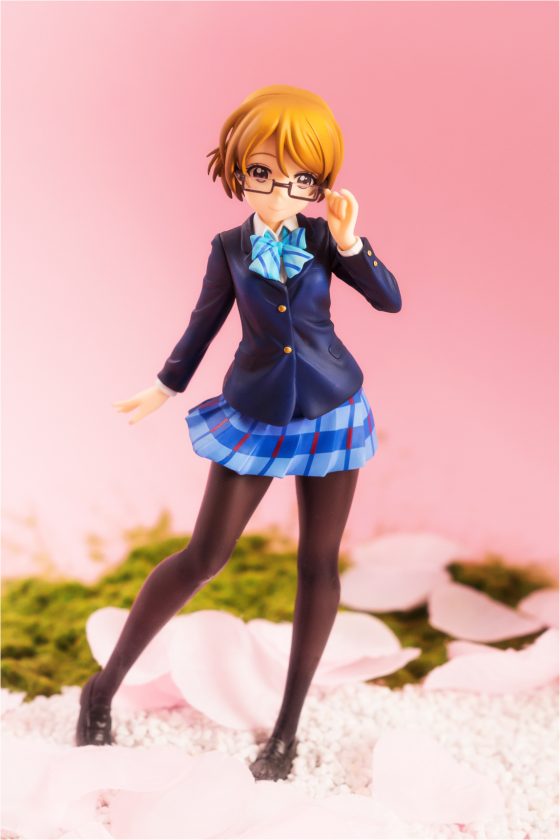 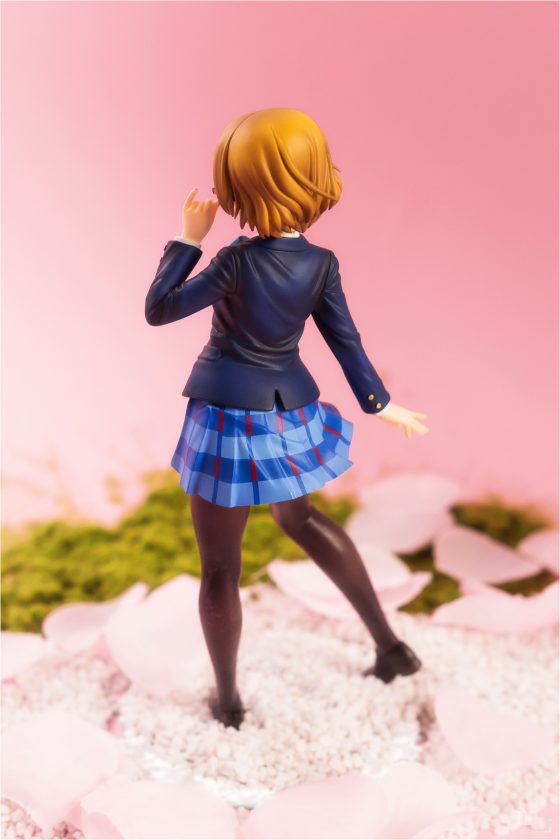 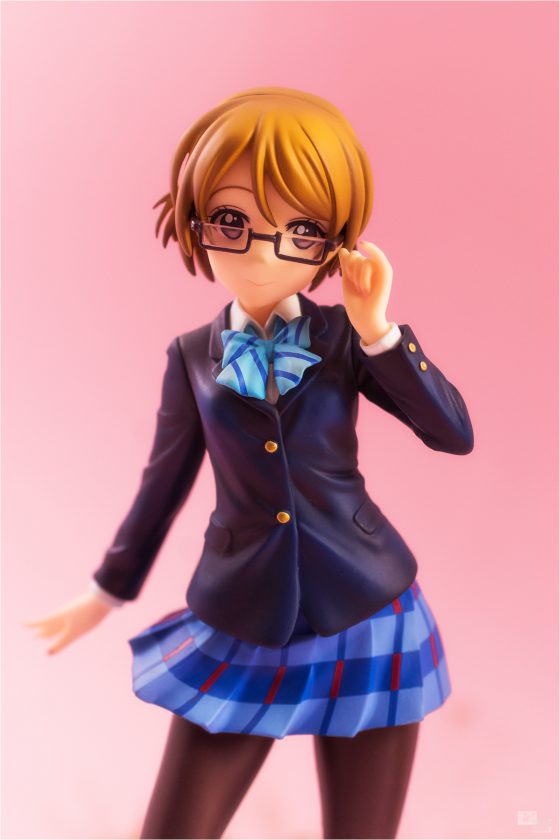 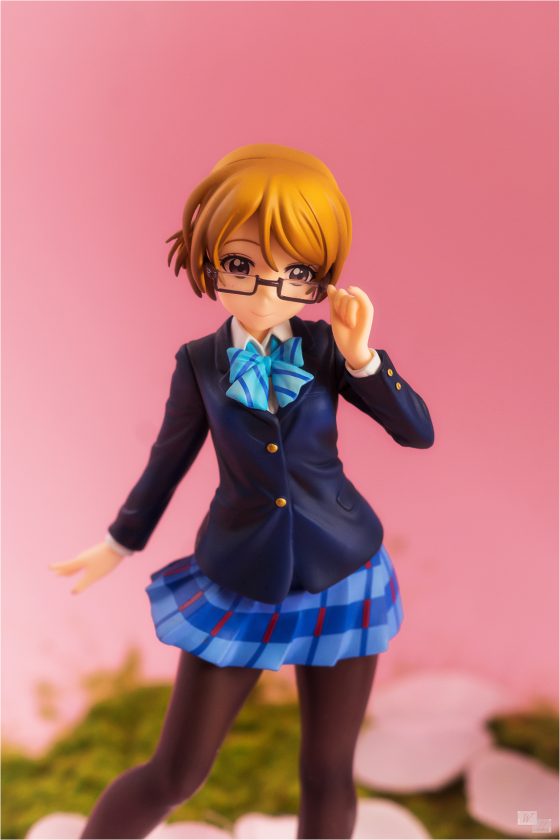 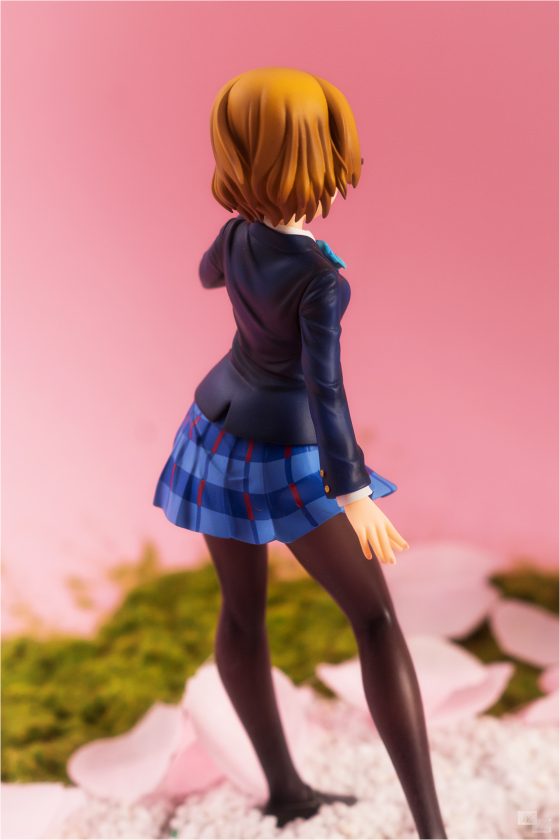 The cute Hanayo is a modest figure, nevertheless with some tricks here and there the sculptor managed to accentuates her pretty body with the help of her clothes. The blazers sits quite close to her body, which highlights her narrow waist and wider hips. As already mentioned the pantyhose also makes her legs very pretty, haha I really like her cute thighs. Alltogether the outfit and bodysculpting gives Koizumi, Hanayo an attractive but also still a decent appearance. 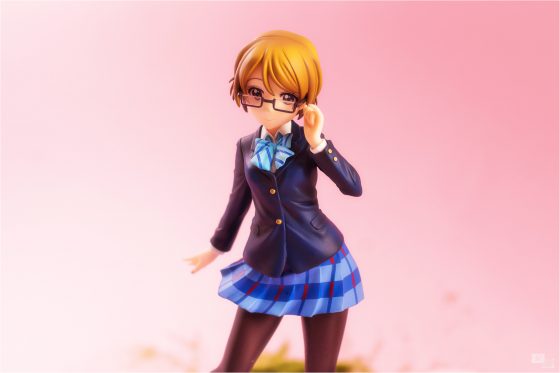 The chosen pose of Hanayo is very nice, the lively articulation or her body, limps and hands is cute and appealing. 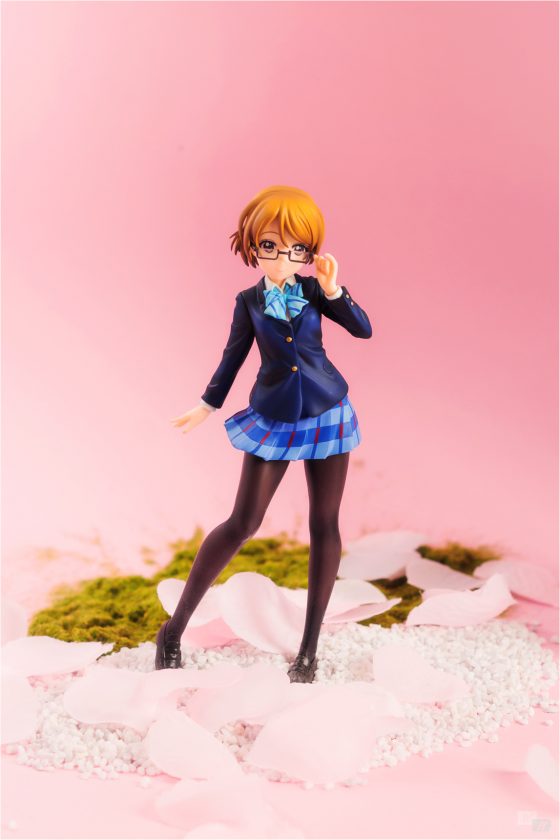 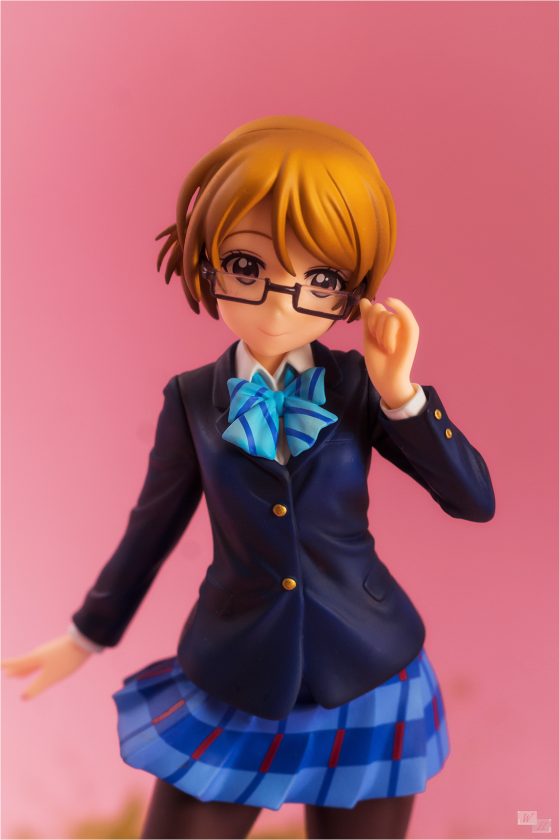 This figure of Hanayo turned out lovely, sweet and lively. Even though when ALTER plays in another league with their fancy Love Live! School Idol Festival figures, FREEing also did a very good job with their Koizomi, Hanayo in her regular school uniform that follows the anime design closely, considering the price it was a real surprise for me that the figure turned out so nicely made. I did not always have the best opinion of the smaller scale figures from FREEing, but sculptor Yokoyama and the manufacturer apparently did an excellent job, since this figure here is surprisingly detailed and elaborately sculpted, a pretty uniform, a sweet pose and most importantly a beautiful head make an appealing figure out of her. As fan of Hanayo I’m extremely satisfied with this figure and happy about my decision to order her. 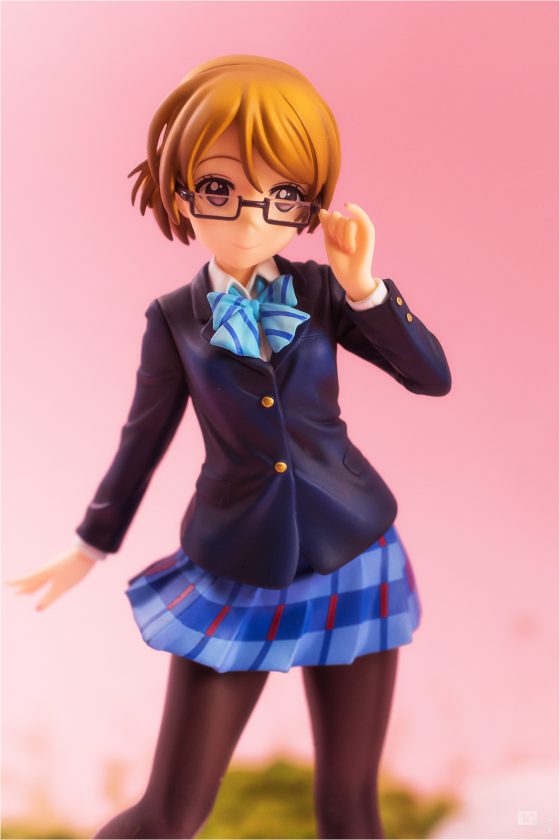 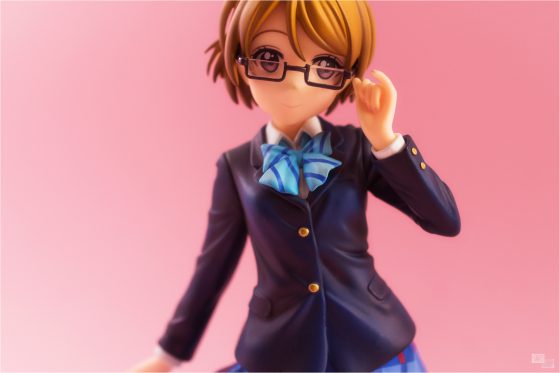 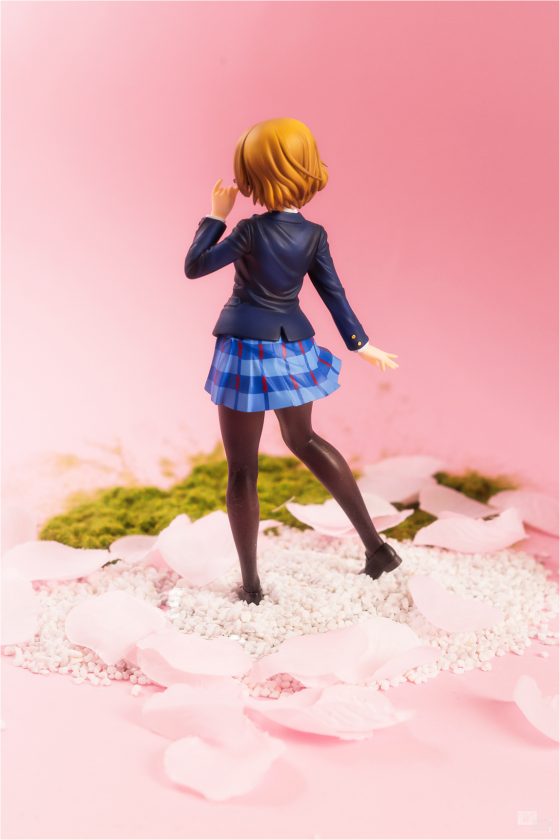 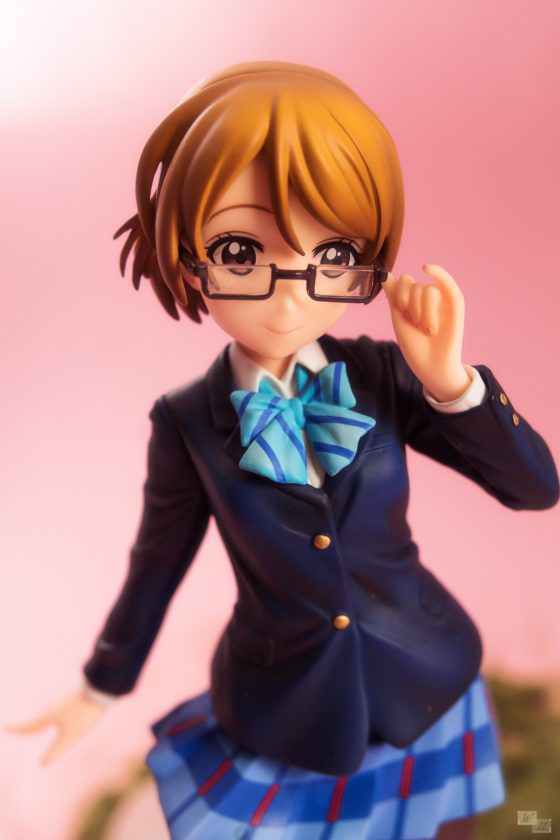 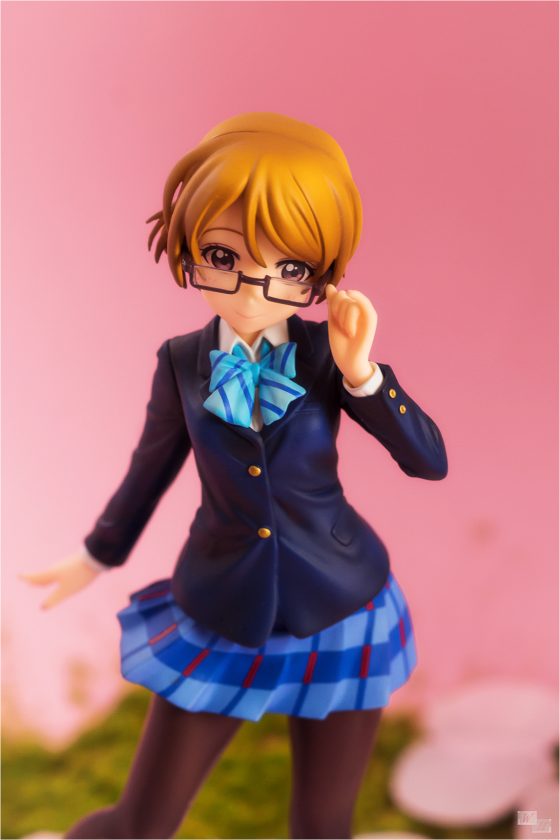