On the 12th of May the wieselhead.de blog turned 7, I still try to create interesting posts accompanied by photography of the things I like the most. For this anniversary I didn’t come up with anything, the last few weeks were pretty chaotic, my vacation can’t come soon enough. Nevertheless, I’ve steadily worked on a review to publish it today ^^

nuresuke satsueikai (濡れ透け撮影会) means something like “photosession with wet clothes” Dragon Toy is popular for their generally sexy figures, that don’t hide much. It’s their first Sonico figure and the sculptor D zou decided to portray her in a more subtle sexy way. Sonico wears a school uniform like outfit and stands there in a flustered pose. 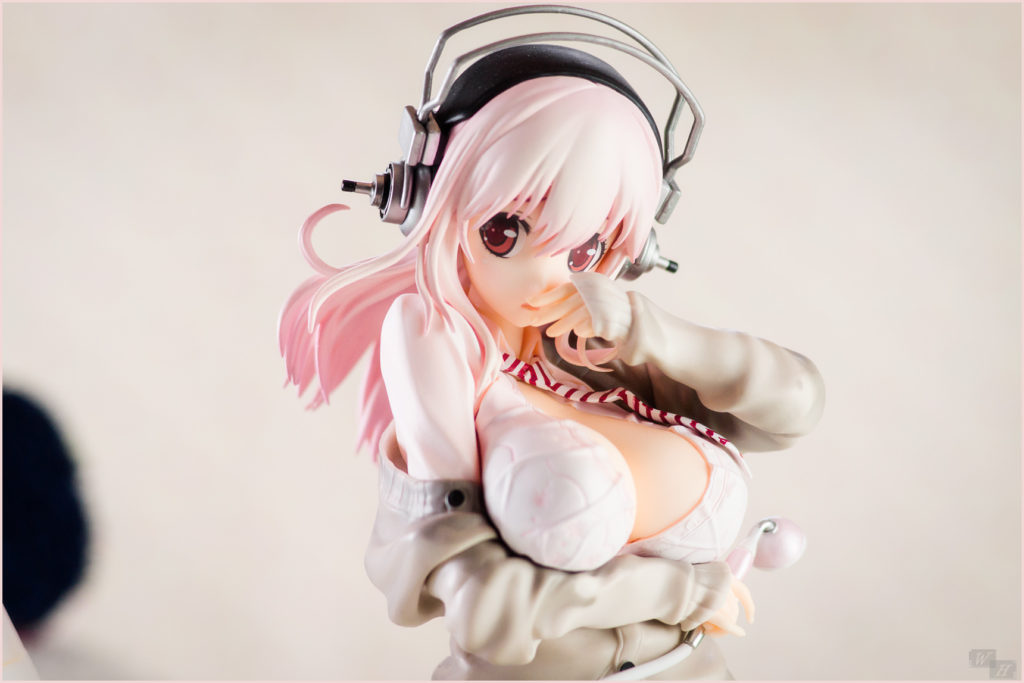 This figure of Sonico is scaled 1/6 and with 26,5 cm she is quite big, part of the figure is an exchangeable bust part and a cute pink shower head which should be attached to the base. She was released in the middle of march 2017.

Don’t ask me why Sonico is holding a showerhead in her hand, probably a failed photosession, I’ve adapted the idea, so that Sonico would make an advertising campaign for a shampoo brand. Therefore I modded an empty shampoo bottle. 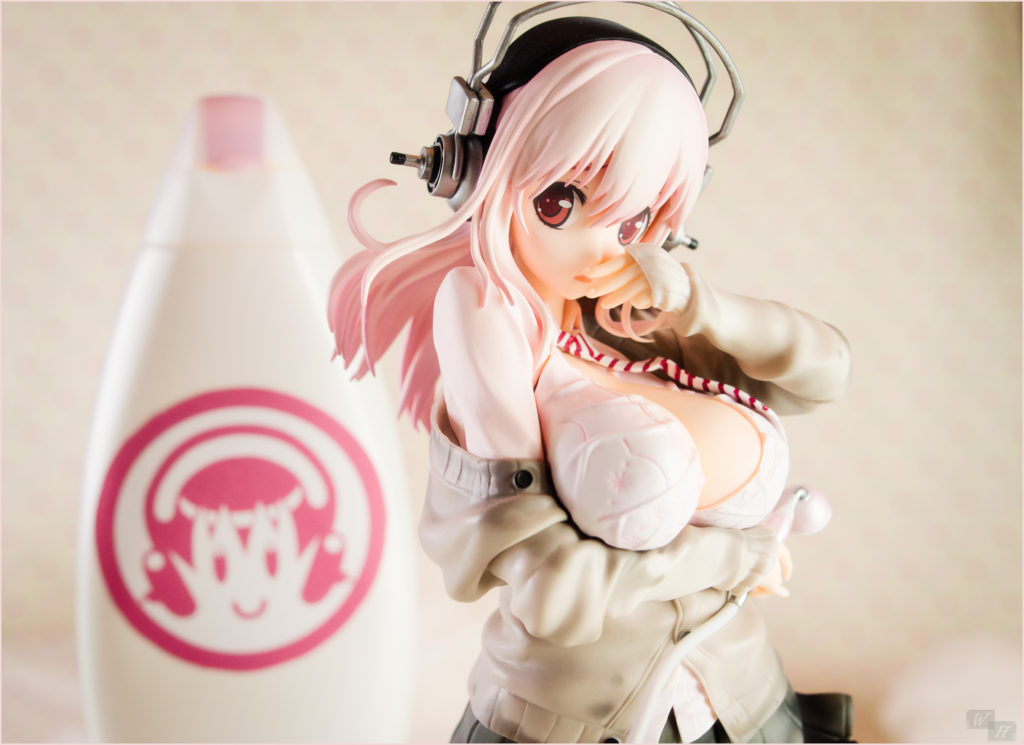 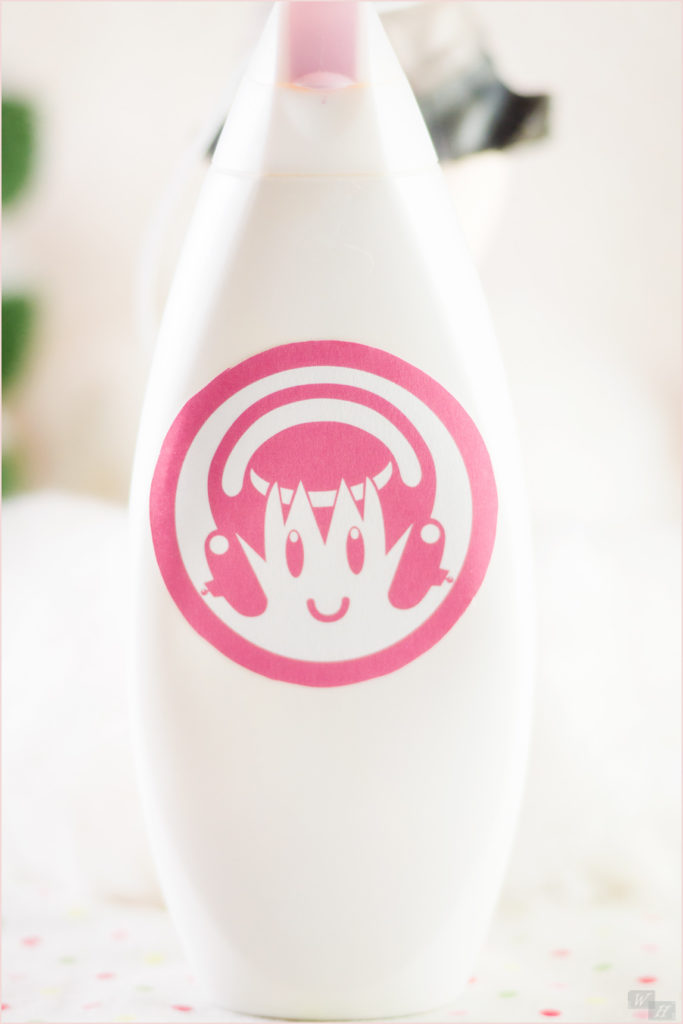 Sonico had a little mishap with the shower and her clothes got partially wet. the wet look turned out convincing with a darker tone of color at the drenched areas, also her blouse turned transparent and that reveals her cute pattern bra. 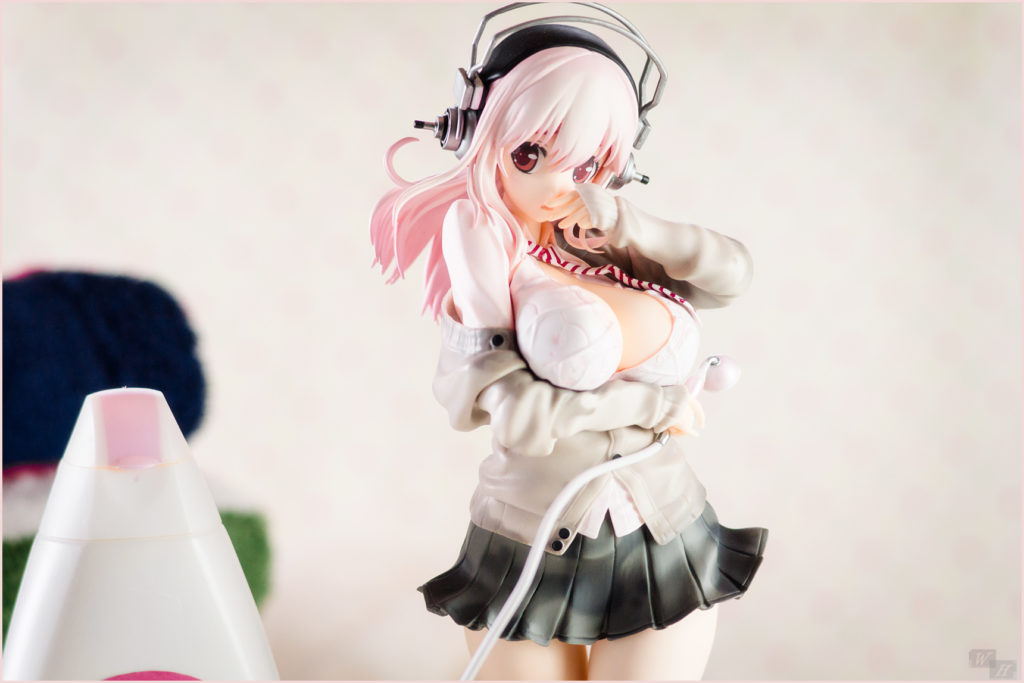 I really like this Sonico adaption of sculptor D zou, he portrayed her as the attractive curvy girl we all know with beautiful big breast, the size is nicely chosen, not as gigantic, as a few other Sonico figures would show these days. 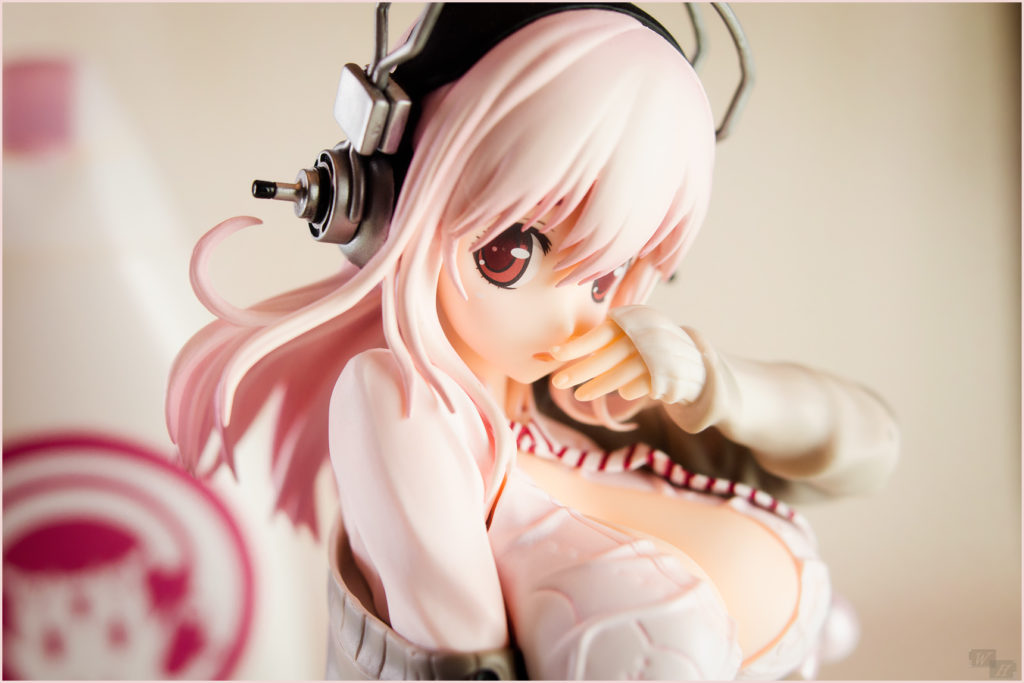 Super Sonico wears an adorable expression with eyes looking to the sides, she is apparently quite embarrassed about her mishap and the result of it. Her cute mouth is mainly hidden by her hand, but the creative and unusual pose is no bad thing at all, thanks to the hand the bashful atmosphere is conveyed in an even more convincing way. 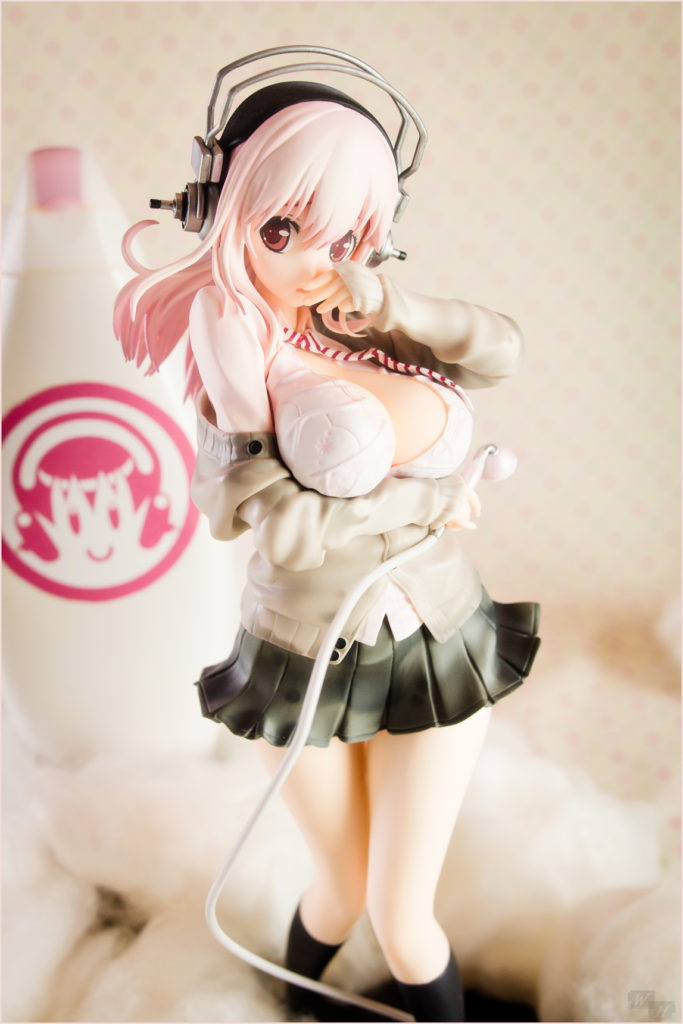 As to be expected of a bigger, high quality figure in 1/6 scale, hair, head and face turned out very detailed and clean, the headphones are nicely made, too. The figures hair looks pretty, fluffy and is painted in a lovely shade of pastel pink. 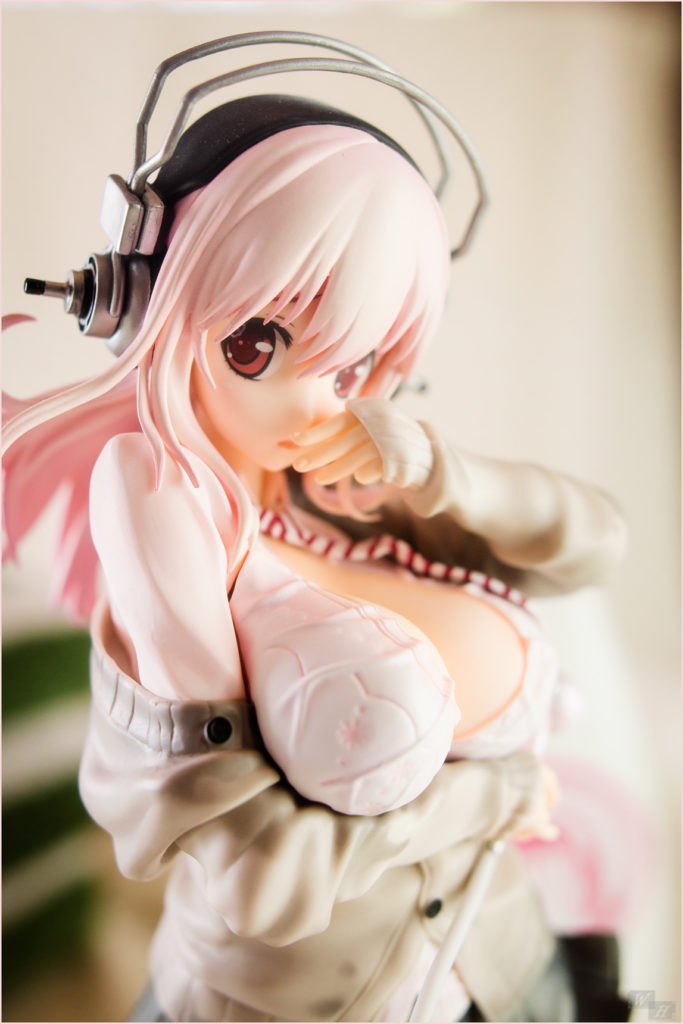 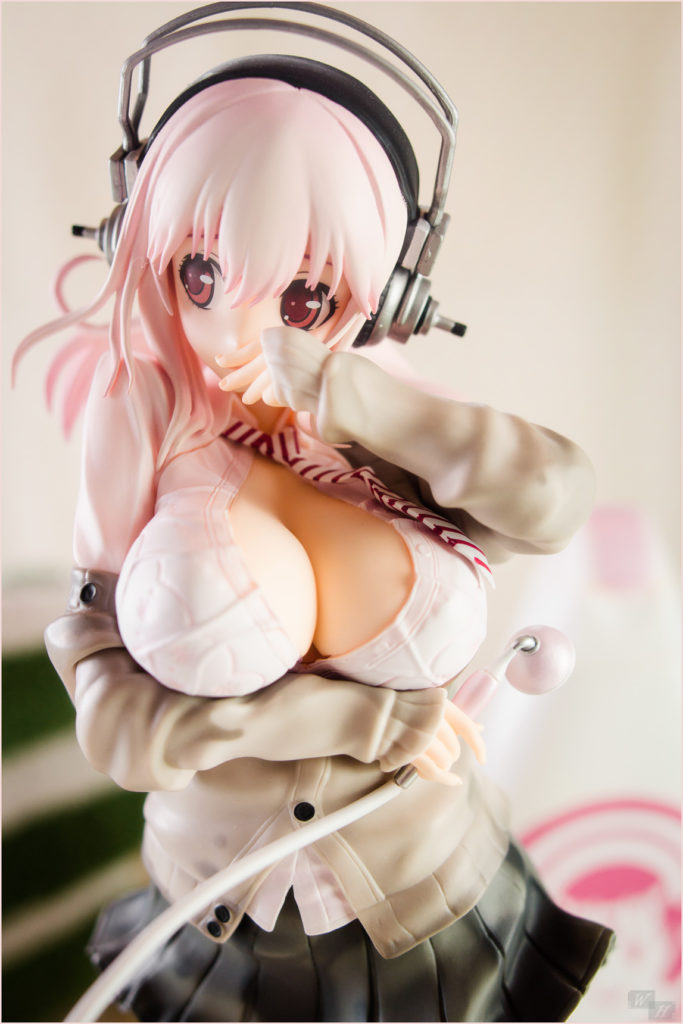 The uniform outfit is cute and appealing, Sonico actually should be in college by now. Compared to most other figures of her, that show her in cute, colorful and always rather revealing outfits, the toned down colors create an unique look. 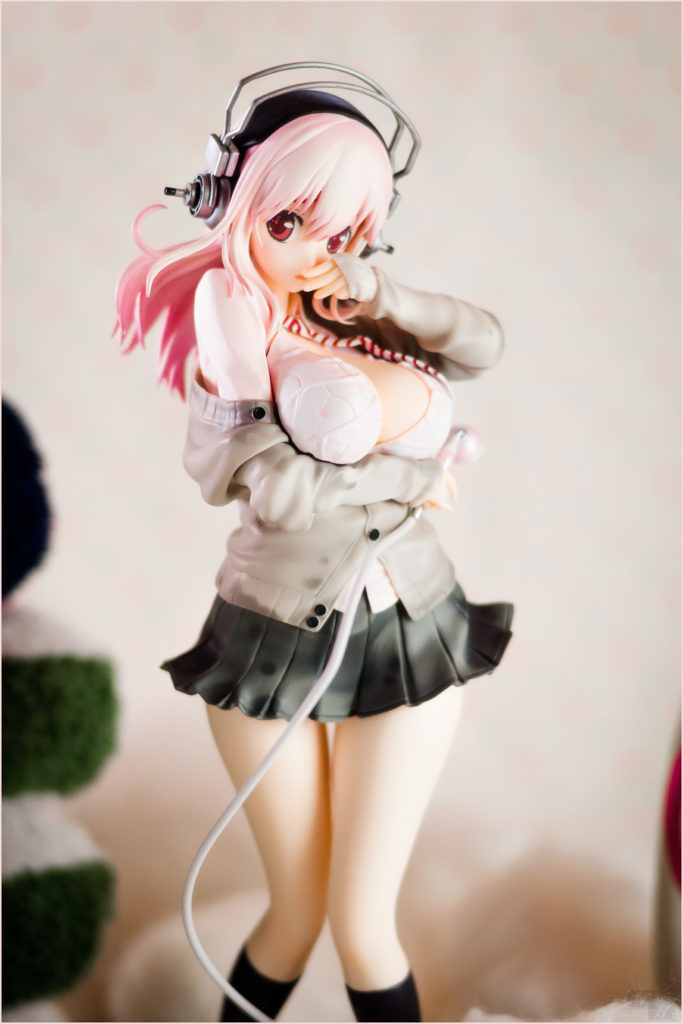 Shortly before release I worried a little, if I would really approve of her subtle colored outfit. In person though, it suits Sonico nicely, the outfit gives her a slightly adult feel. The fluffy jacket with cute black buttons, shows detailed folds and has a good, realistic appearance. Underneath she wears this cute blouse in a tone of pale pastel pink, this piece of PVC was made rather thin, the differences in thickness of the clothes create the illusion of different fabrics. The pleated olive green skirt looks good, although at first the dark color feels a bit unusual on Sonico, at least the striped necktie breaks the clouded color palette a little. 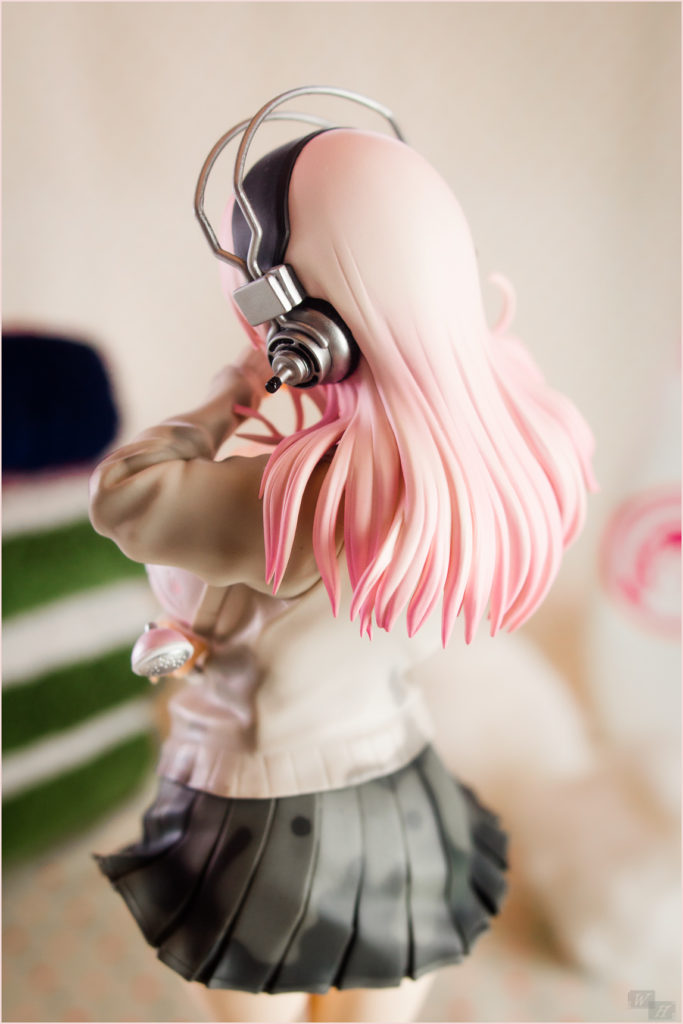 What I also like about this figure are the adorable detailed fingers, sooo cute!!! Sonico is holding a pink shower head in her petite hand, it’s very cute and detailed, the hose of the shower head is attached to the base. 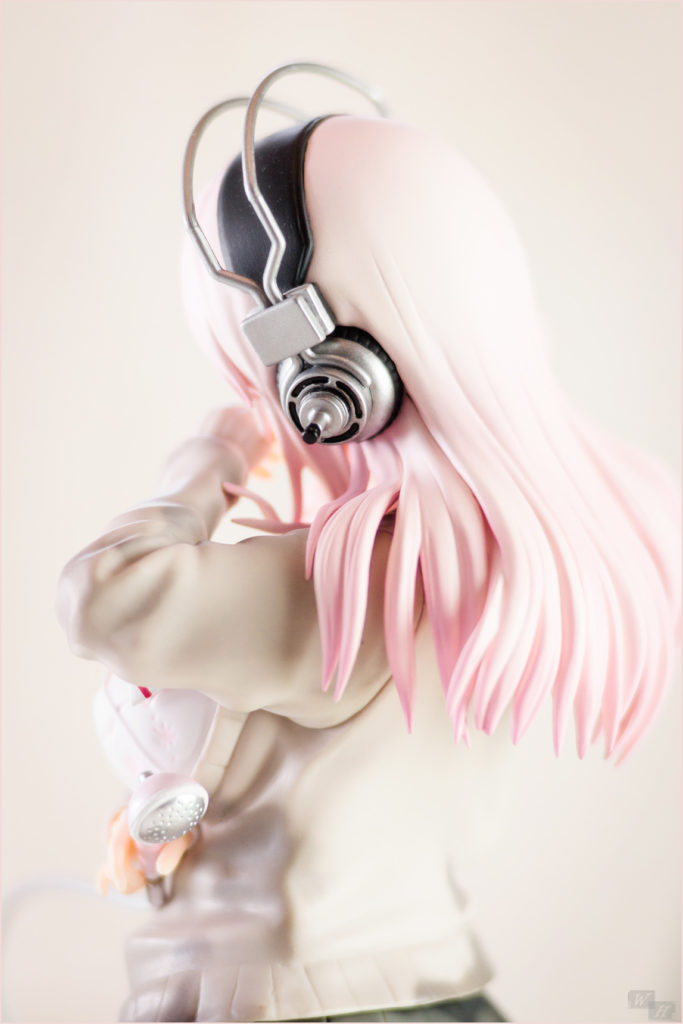 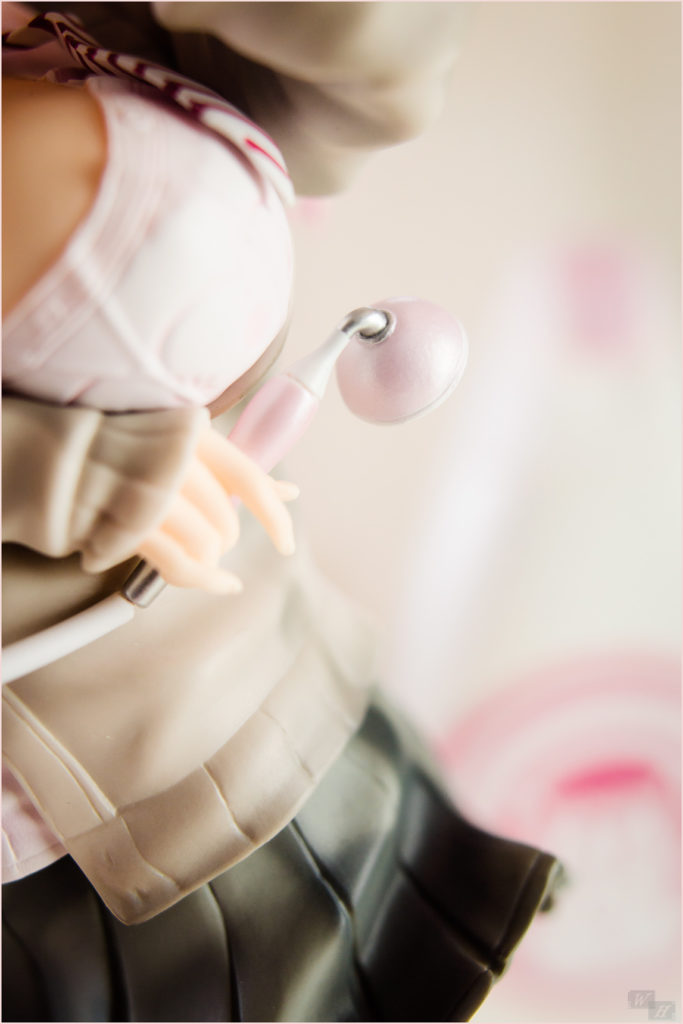 This Sonico from Dragon Toy is surprisingly dressed, but a few small castoff options were implemented. Haha on her figures Sonico appears to be more daring than with her gravure idol job, in official illustrations she never shows her boobs exposed, but nearly all of her figures have a cast off option, also this one. The optional breast part shows Sonico without bra and the shirt pushed to the sides, she has beautiful and nicely sculpted boobs with small pink nipples. 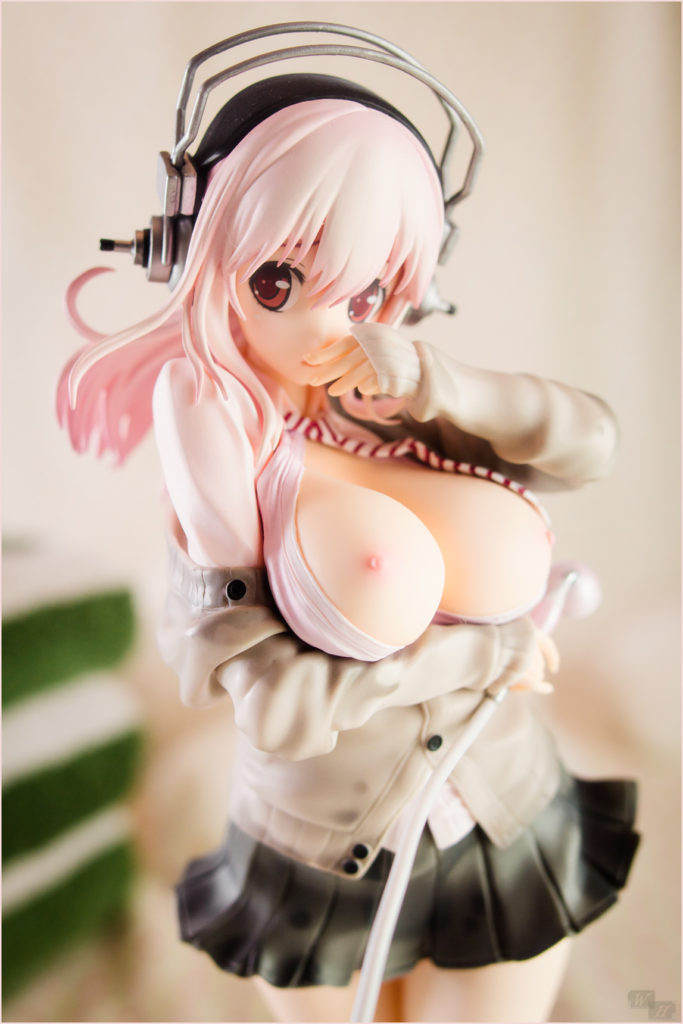 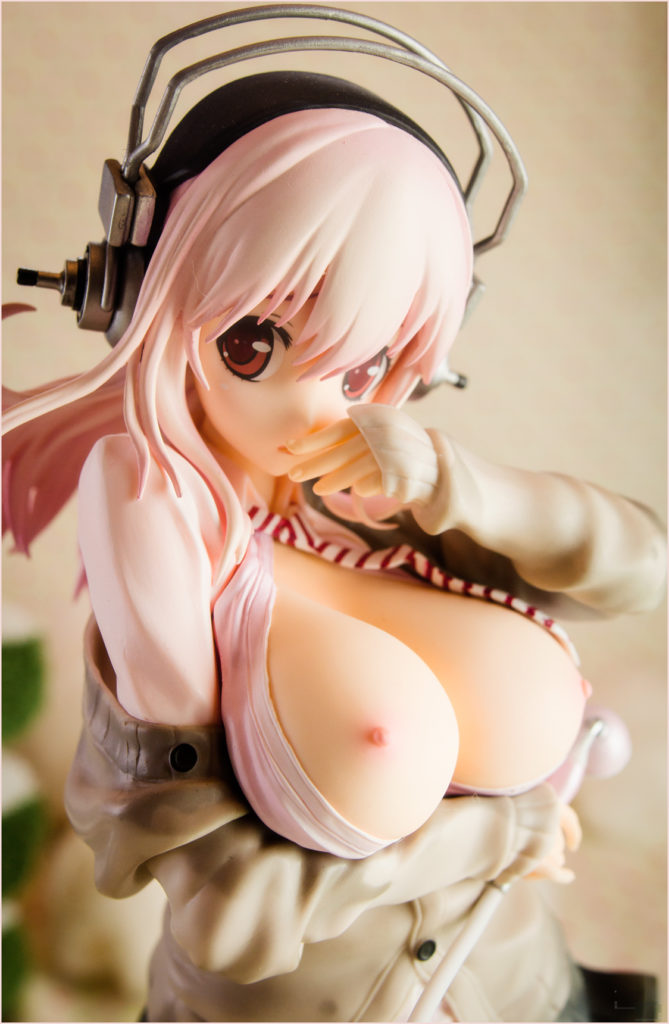 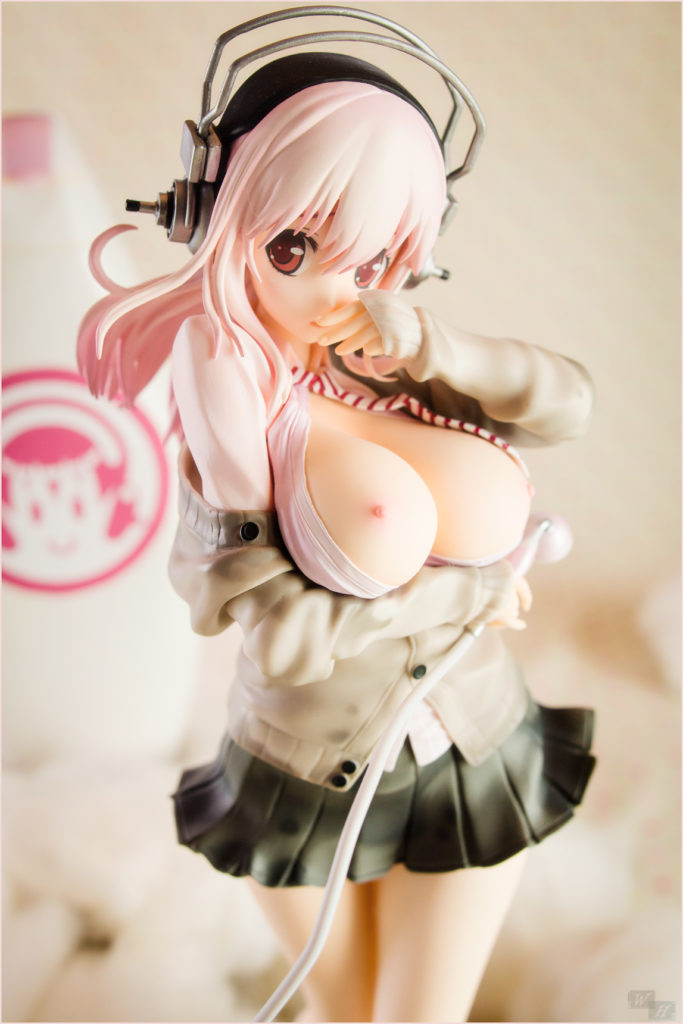 It should be no surprise that the skirt can also be taken off, to reveal Sonico’s cute pink panties. At the back they are somewhat off center. Ahem, without skirt one can examine and admire her pretty backside and womanly thighs  ❤️ . 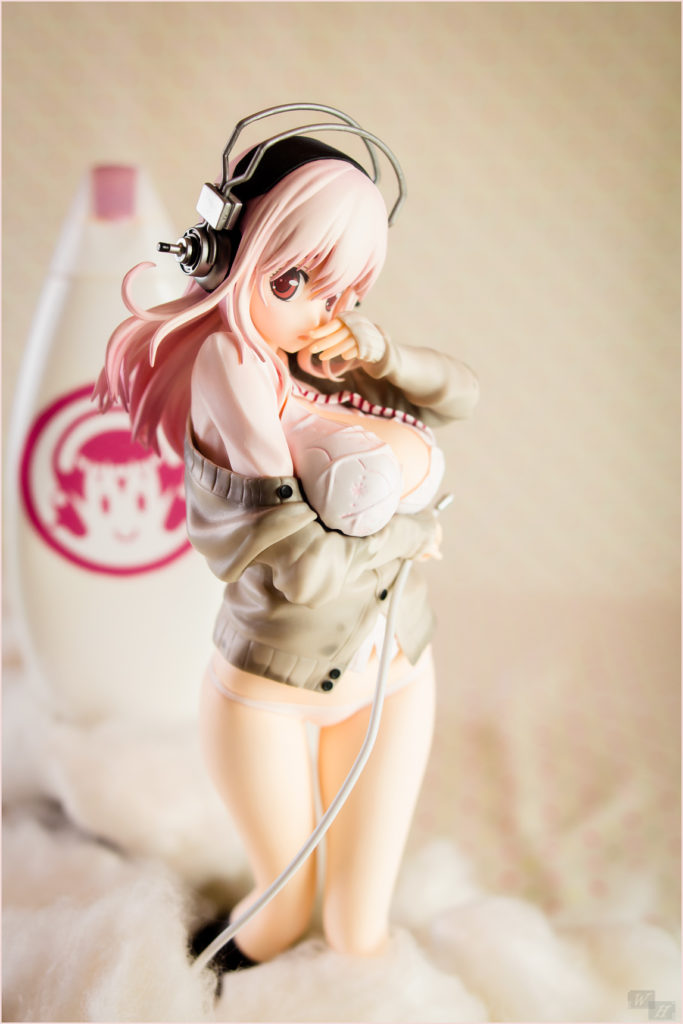 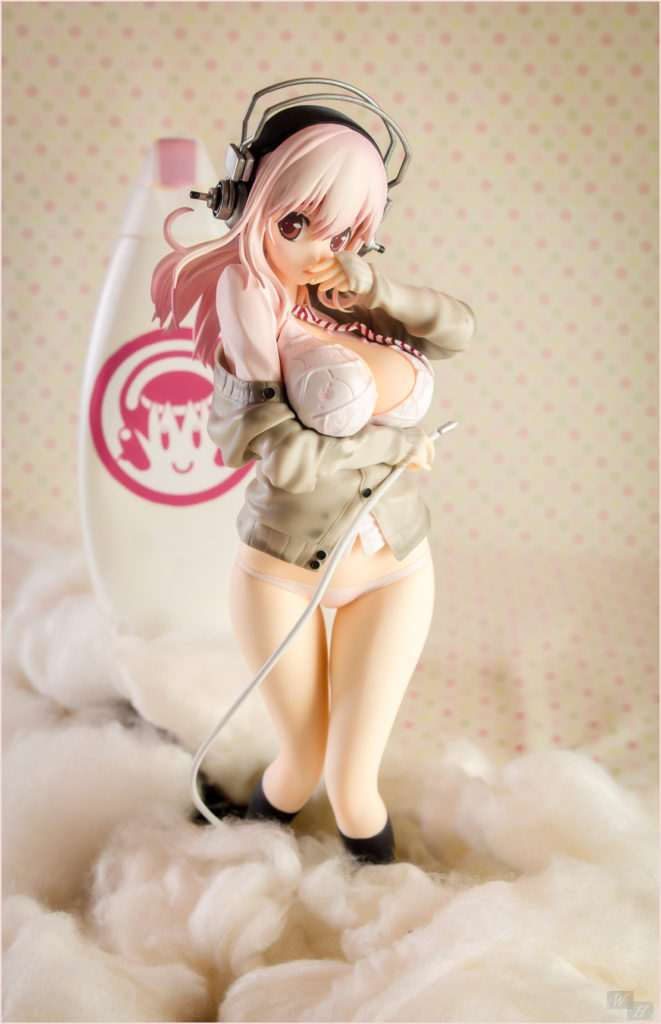 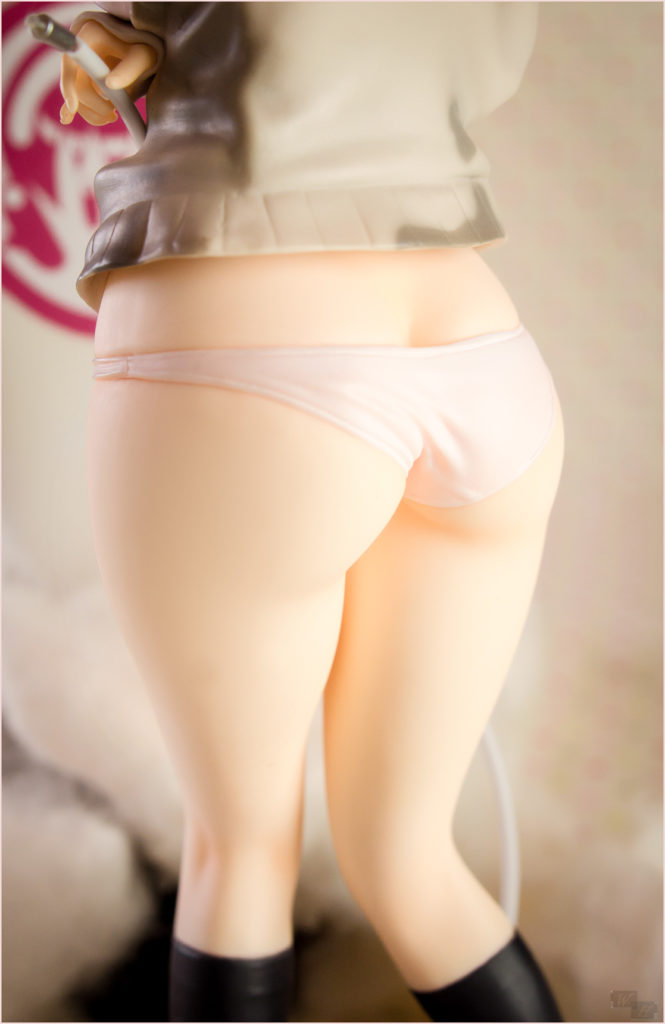 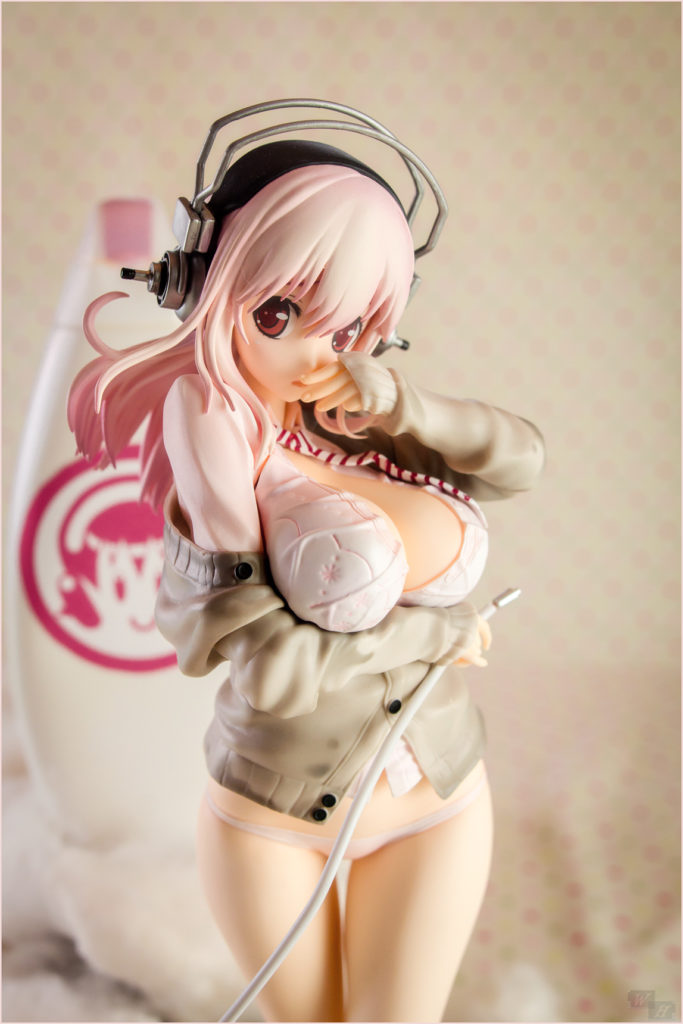 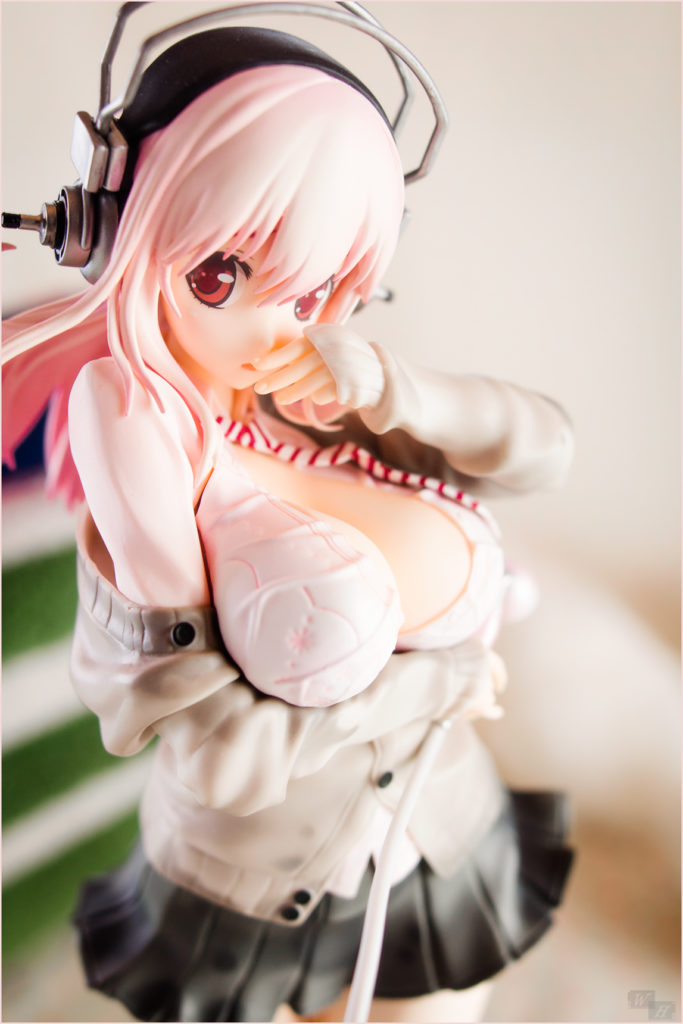 The Super Sonico ~ nuresuke satsueikai version is an interesting and visually appealing figure, she is big and creates a nice atmosphere, her pose, outfit and expression are nicely combined. There have been made many nice Super Sonico figures, I bought quite a number of them, the Dragon Toy figure of Sonico was a good purchase, she can be considered as fully dressed, but still has a sexy direction and cute expression. She is nicely made with a lot of details on her outfit and body. Overall it’s a very pretty figure of the Super Sonico character with less exaggerative proportions.