I thïnk it’s about time for the first November post, I honestly have a dislikīng for this month, its cold, humid and the sky is constantly gray. My spirit dropped and I only could bring up the motivation to play the nice Granblue Fantasy. 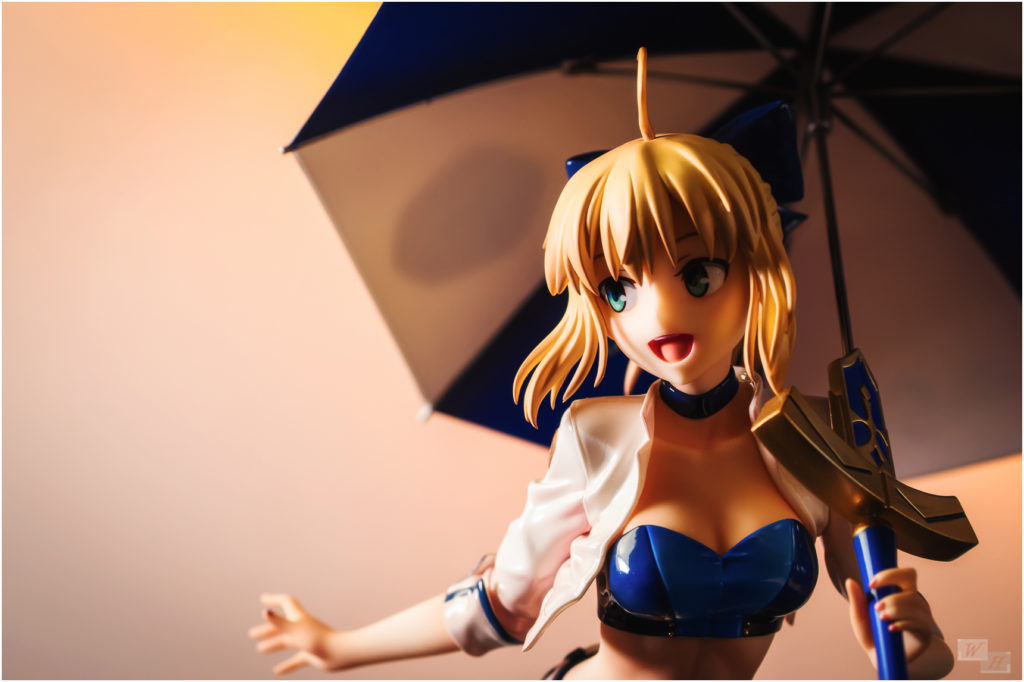 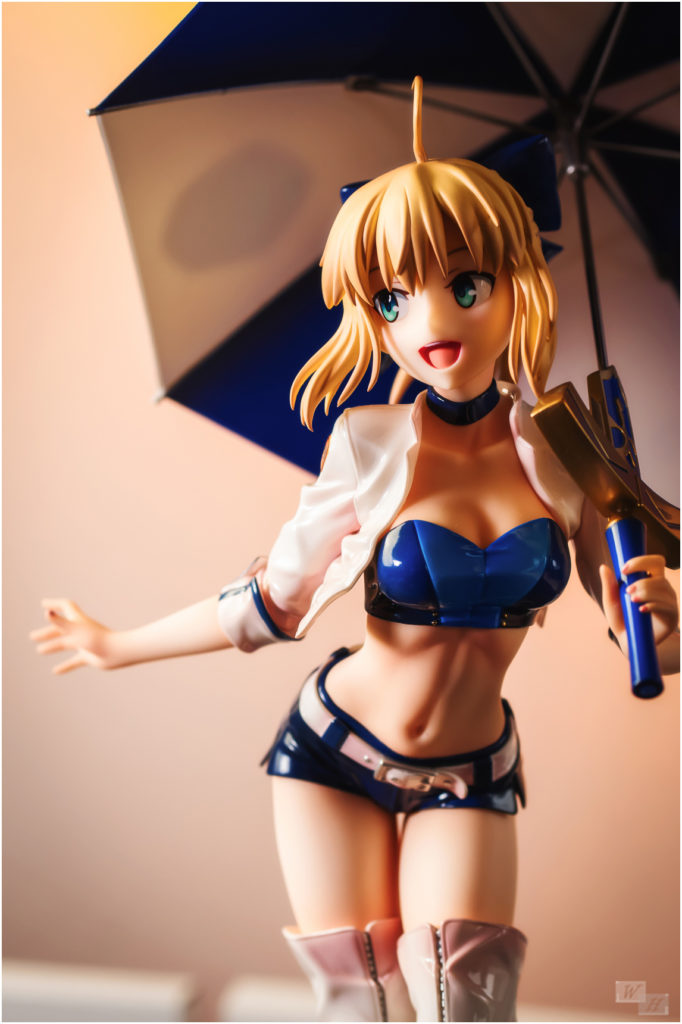 Nevertheless, today I will write a figure review of the never fading Saber character, a few weeks or more ago I’ve received Saber – Type-Moon Racing ver. The figures design is based on the Fate/Stay Night Unlimited Blade Works anime adaption, I dont remember any grid girls, but Takeuchi Takashi came up with the illustration for this figure. 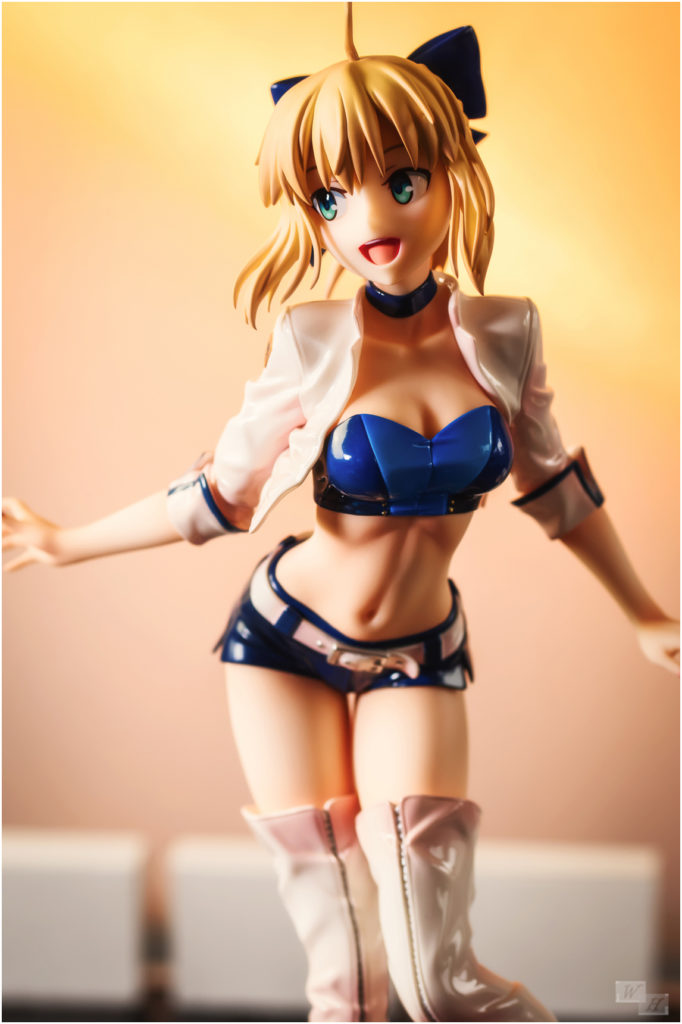 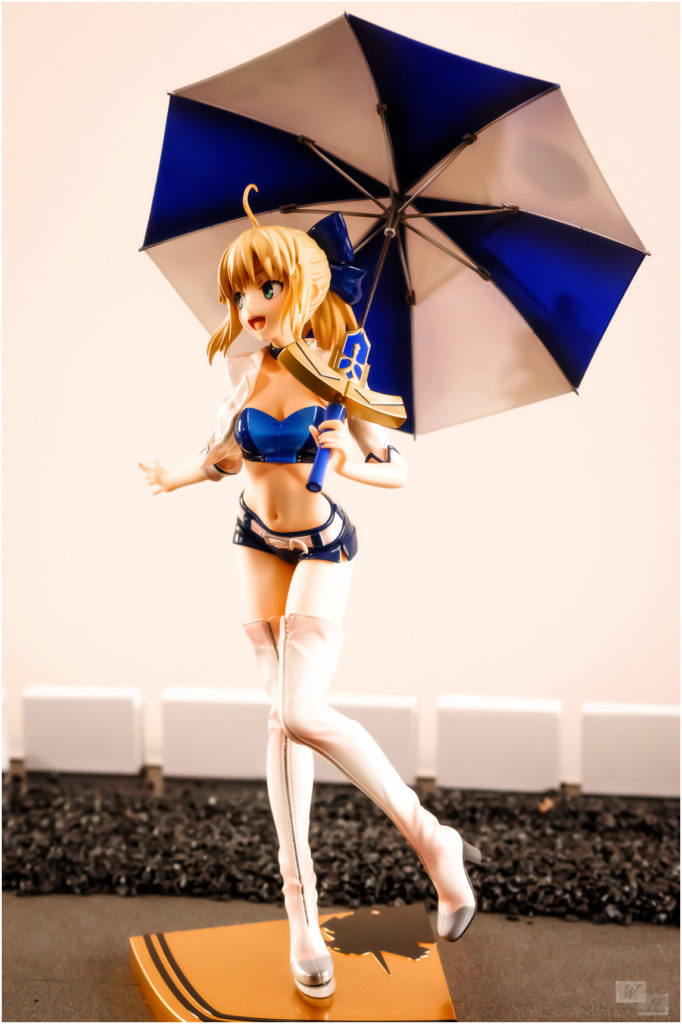 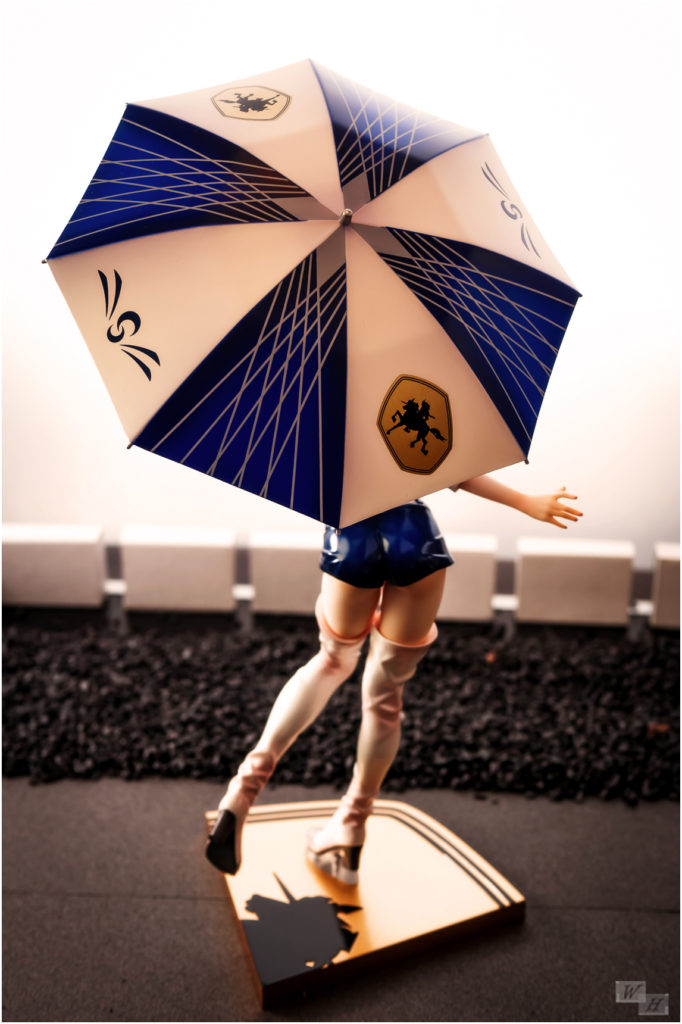 Saber – Type-Moon Racing version was manufactured by Stronger, actually my first time that I`ve ordered a figure from them. Saber was released in late September 2017. She is scaled 1/7 and comes together with an umbrella, with the umbrella the figure measures 24 cm. Her sculptor was Musasabi YU-ko a fresh person with relatively few works. 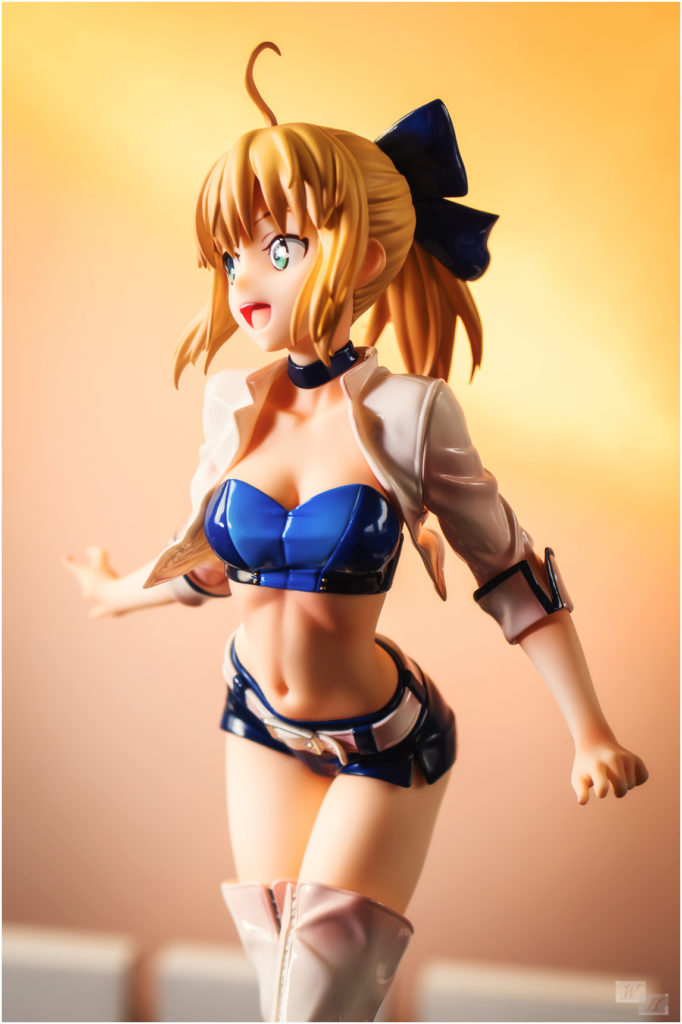 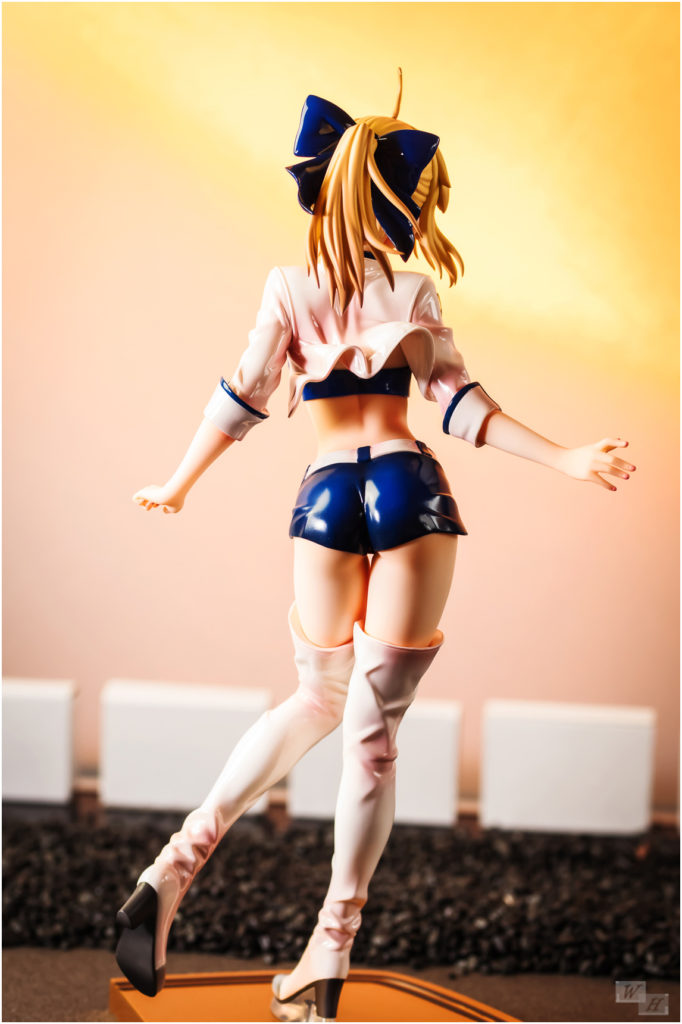 I’m actually a Fate Stay Night fan, I always enjoyed the adapted animes in terms of story and setting, basically Saber isn`t my favorite character, only in the Fate/Stay Night Unlimited Blade Works anime, where she had a really great character episode I began to appreciate her character, Saber going shopping with her friends, playing baseball and having a picnic. As normal girl Saber is quite lovely. 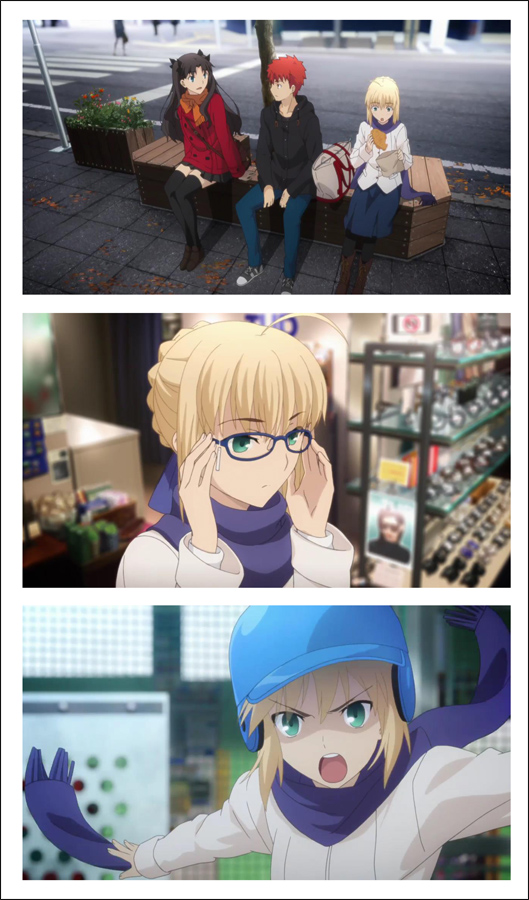 Her usual appearance is that of a stoic armor clad Knight, but with the expanding Fate universe and more games, different Sabers appeared with different looks and quite different personalities, in Fate Go they overdid it a bit with the Saber based characters nevertheless. Why did I decide for this Saber, when there are like 200 figures of her around? 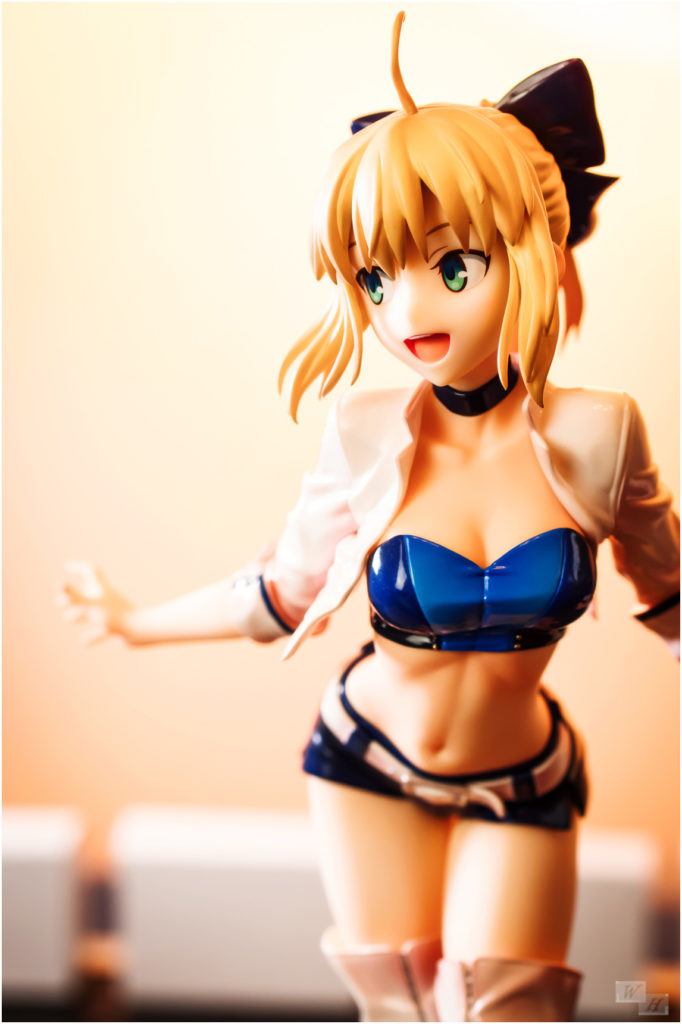 I really like unusual Saber designs that portray Saber in a good mood and without armor, so far I’ve bought the
Saber – Fate/Hollow Ataraxia – Maid R and Saber EXTRA – Fate/EXTRA – Swimsuit version from Alter.

The Type Moon – Racing version was just such a vibrant and lively figure adaption I just couldn’t say no to. 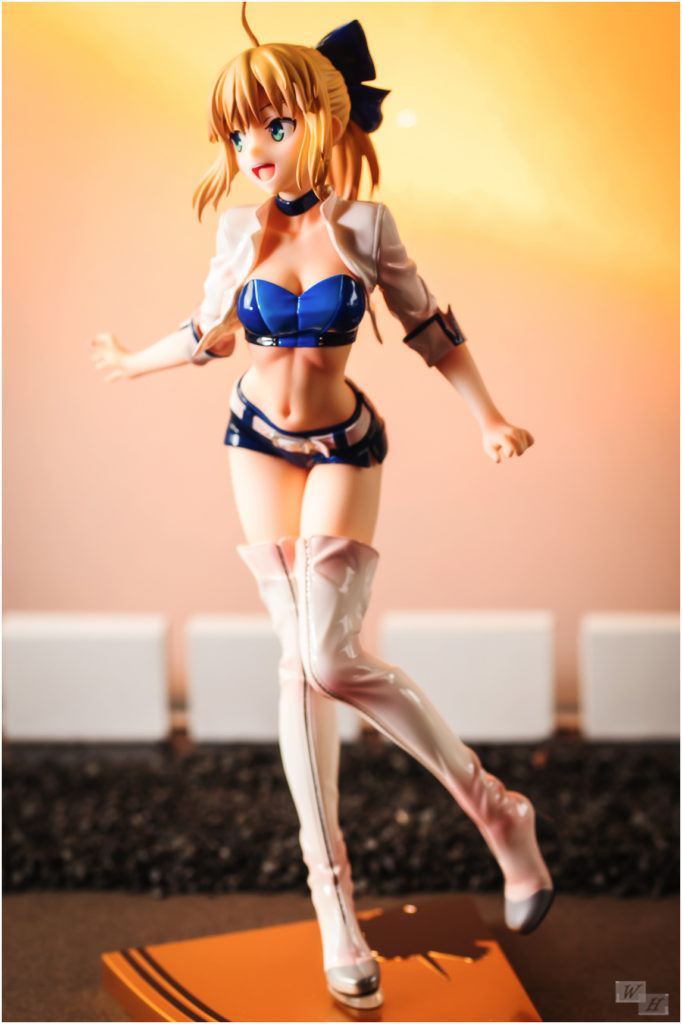 The Saber figure has nice hair, sculpted in detailed and dynamic manner, it also has a appealïng tone of blonde. The ahoge is a seperate piece that had to be pressed into her head, at first I wondered what the tiny plastic bag was for. 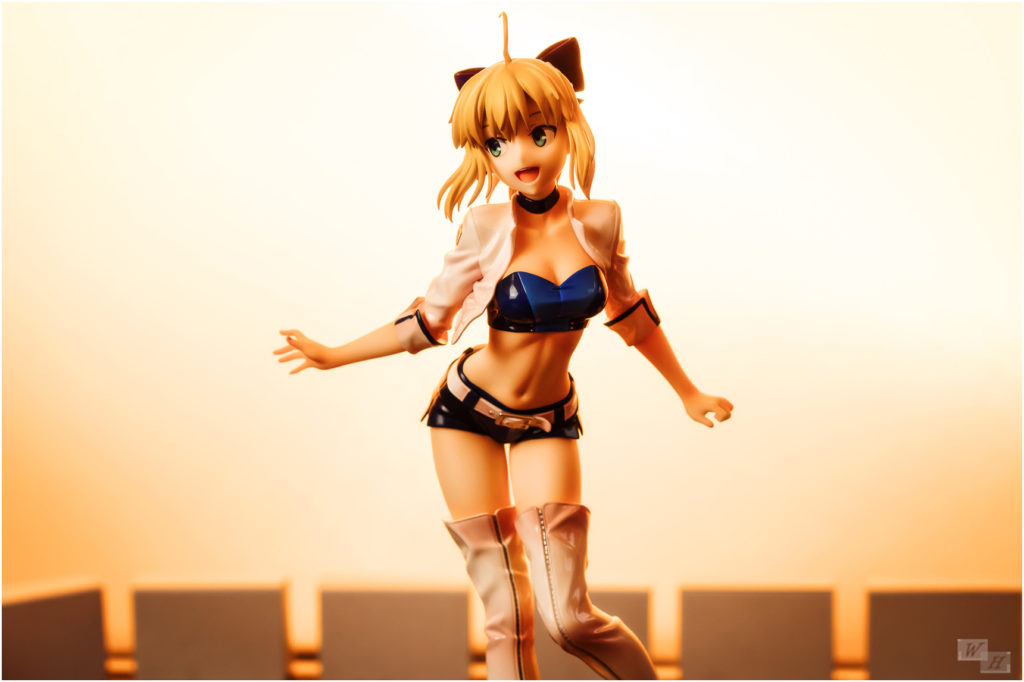 Her face is accurately adapted from the Fate/Stay Night Unlimited Blade Works anime, but it’s additionally beeming with happiness. Saber has sparkling eyes and a very cute appearance. The detailed open mouth with upper front teeth line looks really nice, Overall this Saber has a pretty face with an enchanting and surprisingly upbeat expression. 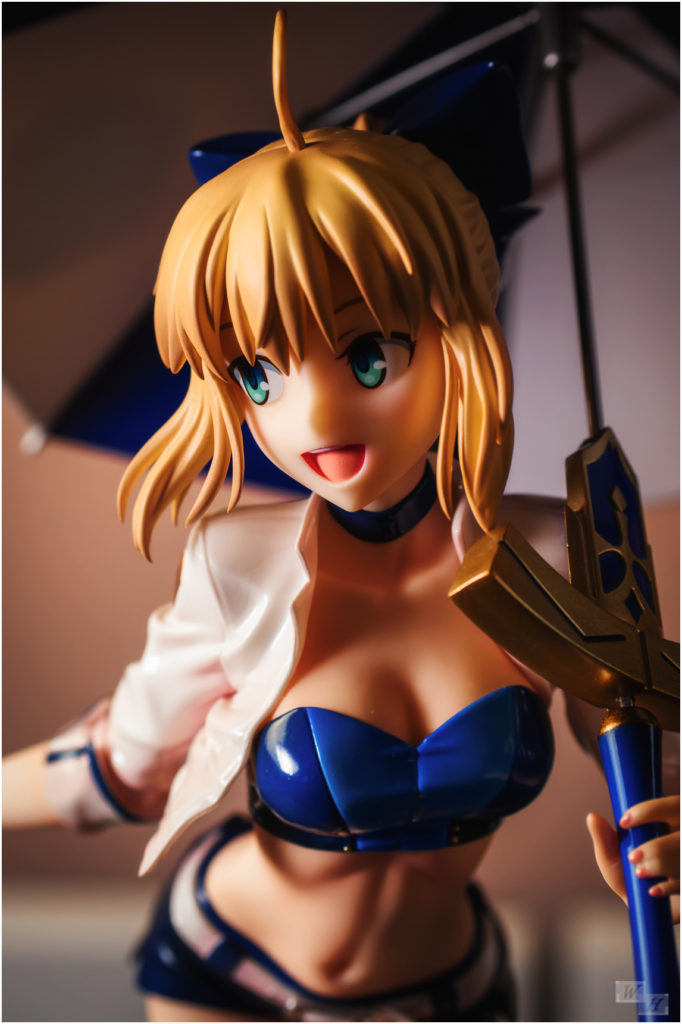 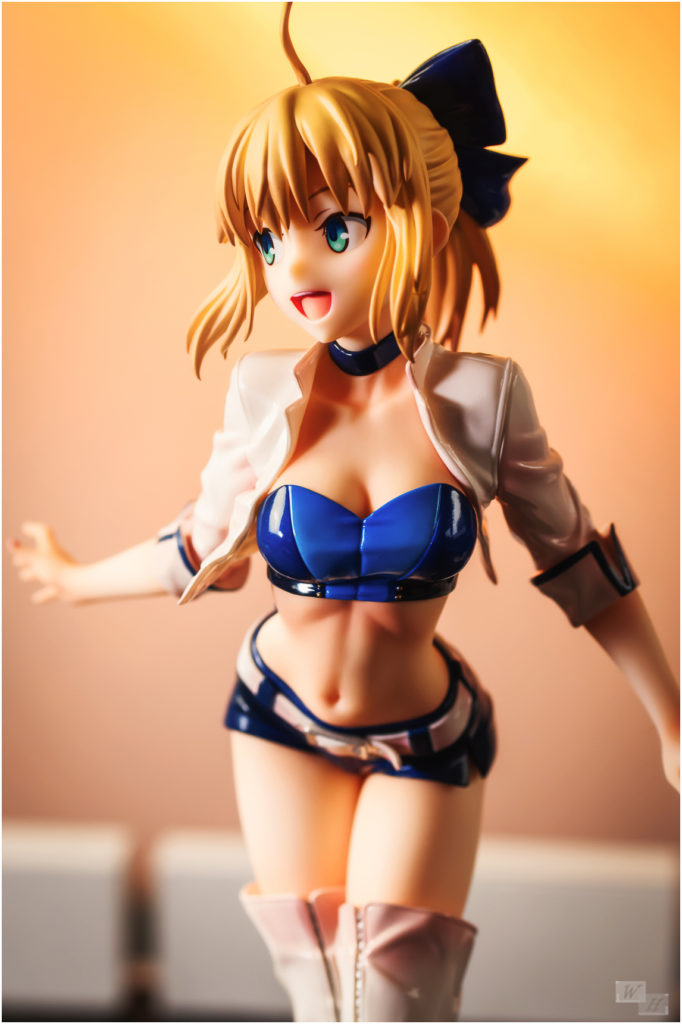 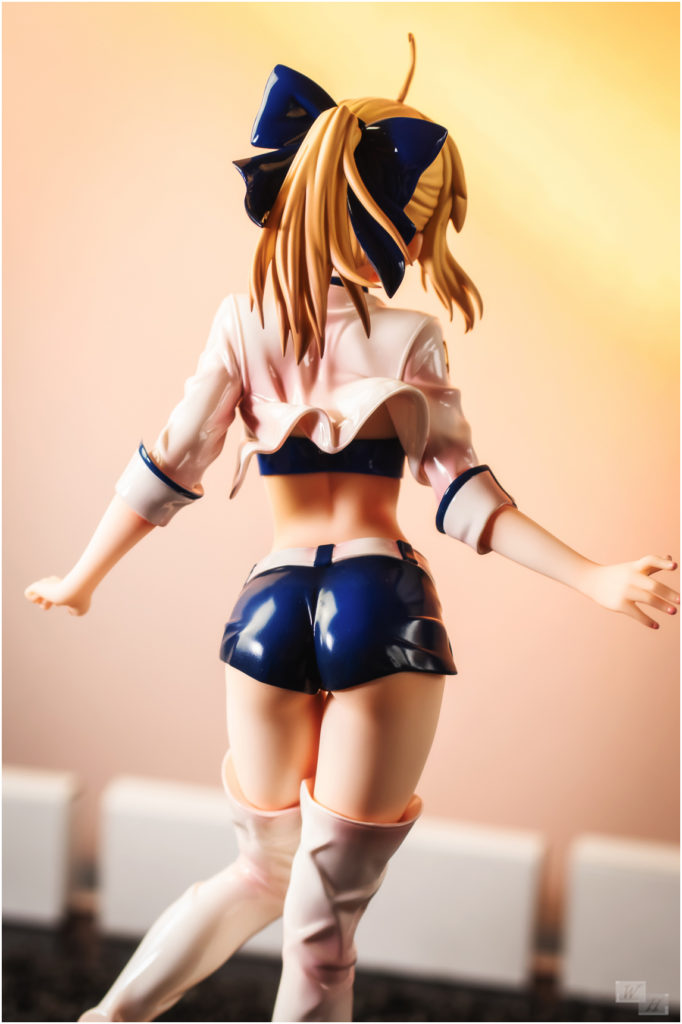 Saber’s is rather skinny or better said sporty with her abs well trained and a modest chest. Based on her character data, Saber is no tall girl, but with those long legs this figure is looking quite tall. The sculptor gave her well defined and attractive buttocks from my perspective her butt is nevertheless small. I actually wouldn’t mind if she was a little chubbier than she is in this adaption, the figure is very pretty and a bit of variety in ones collection is positive. 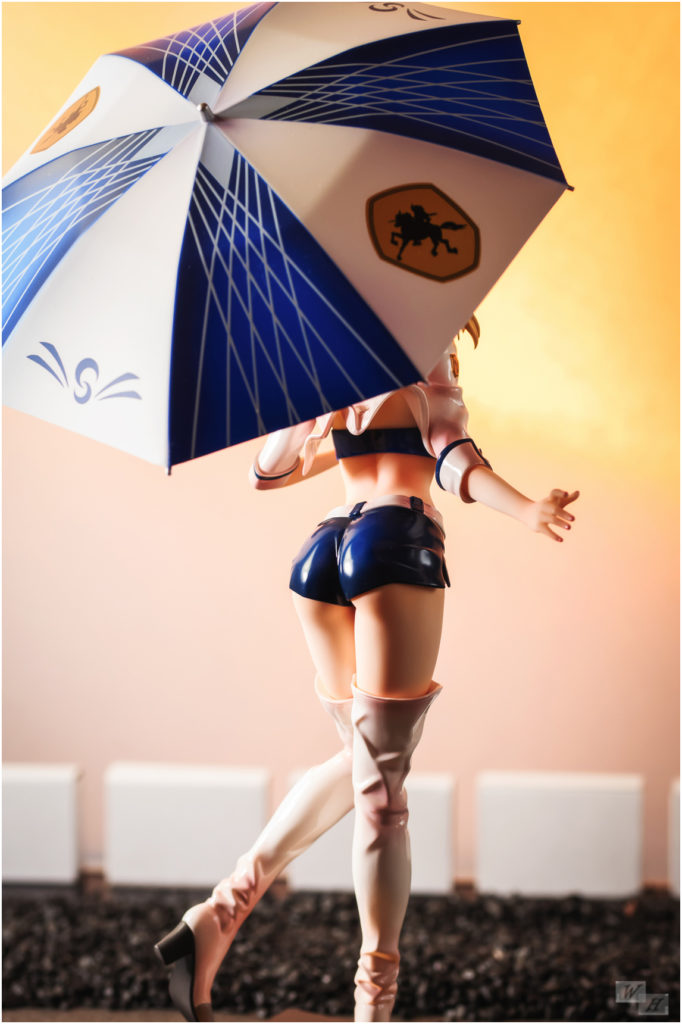 I also would like to mention the petite hands with nicely articulated fingers of this figure, they look quite realistic and the fingernails paint has been carefully applied. Saber comes with an exchangeable left arm, one has a gripping hand. 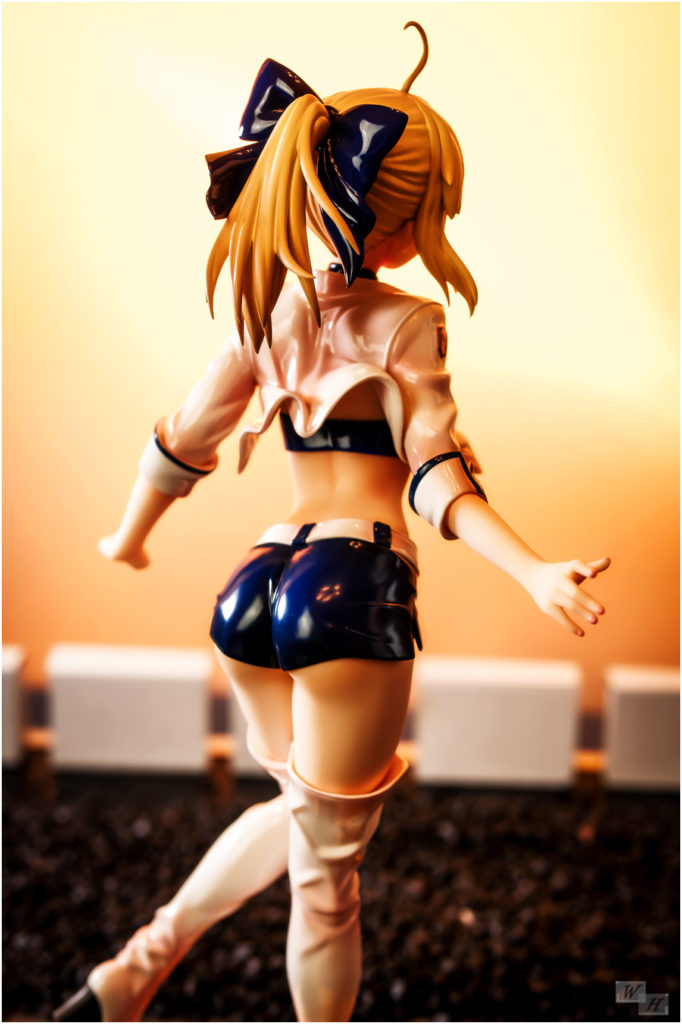 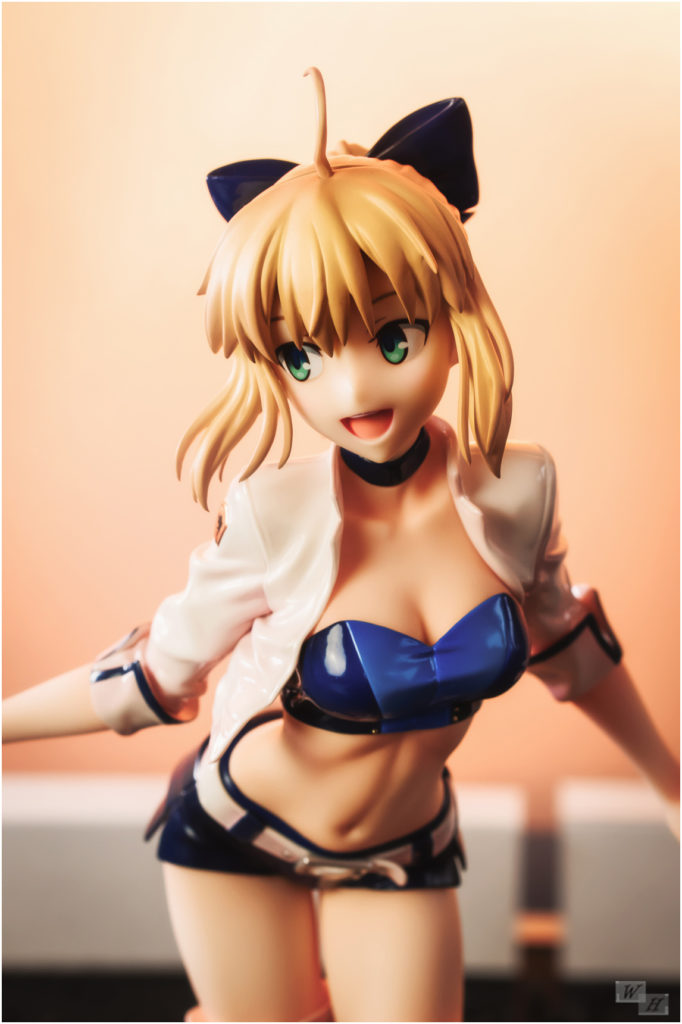 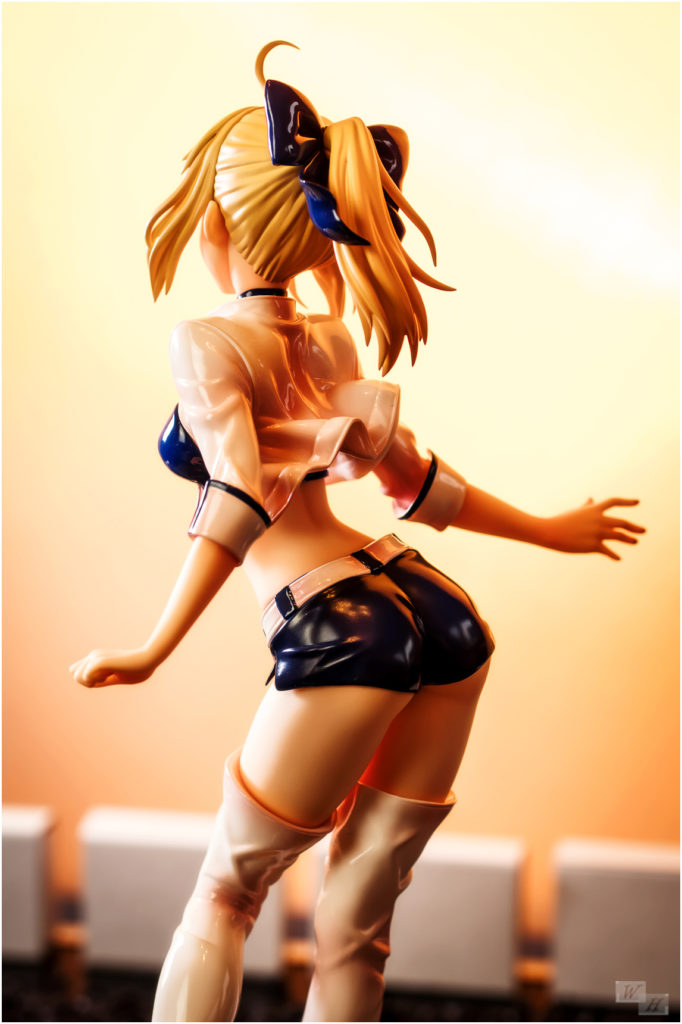 The Saber racing version has a stunning outfit with a cool white jacket with short sleeves, the golden enblem is a nice additional eyecatcher. The hotpants adds a bit of fanservice, but reveals no too much of her firm butt. Her trademark color, royal blue was used on her attractive tube top, the end of the sleeves the hotpants and the blue ribbon at the back of her hair. Around the hotpants she wears a nice white belt. The thigh high boots are really cool with silver heals and toe cap, the long zipper at the front goes all the way up, around the upper part the boots are a little loose. 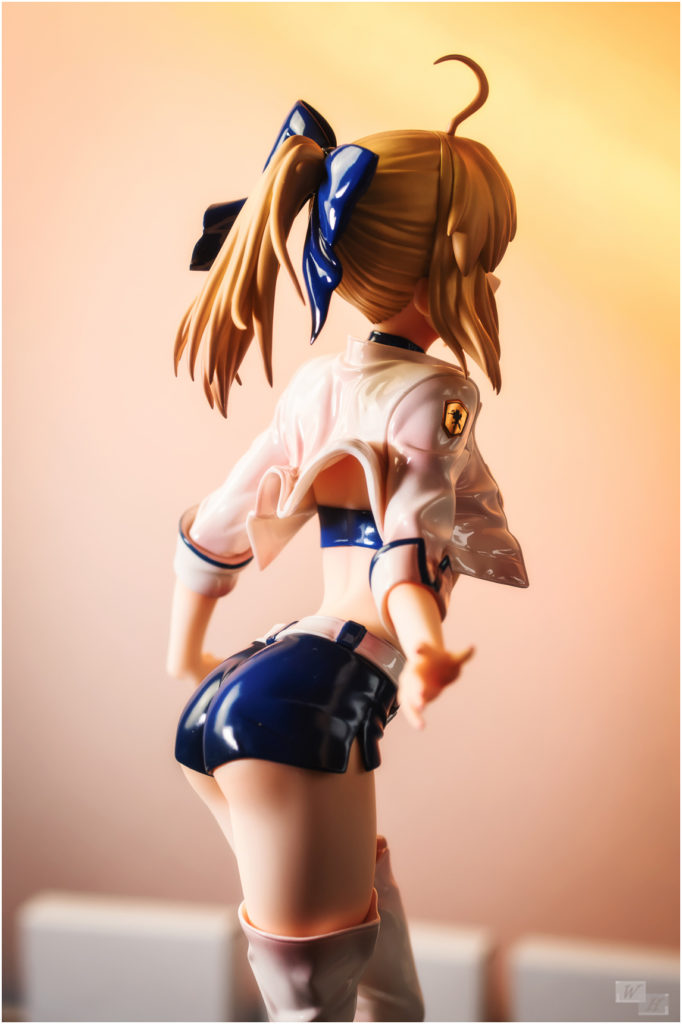 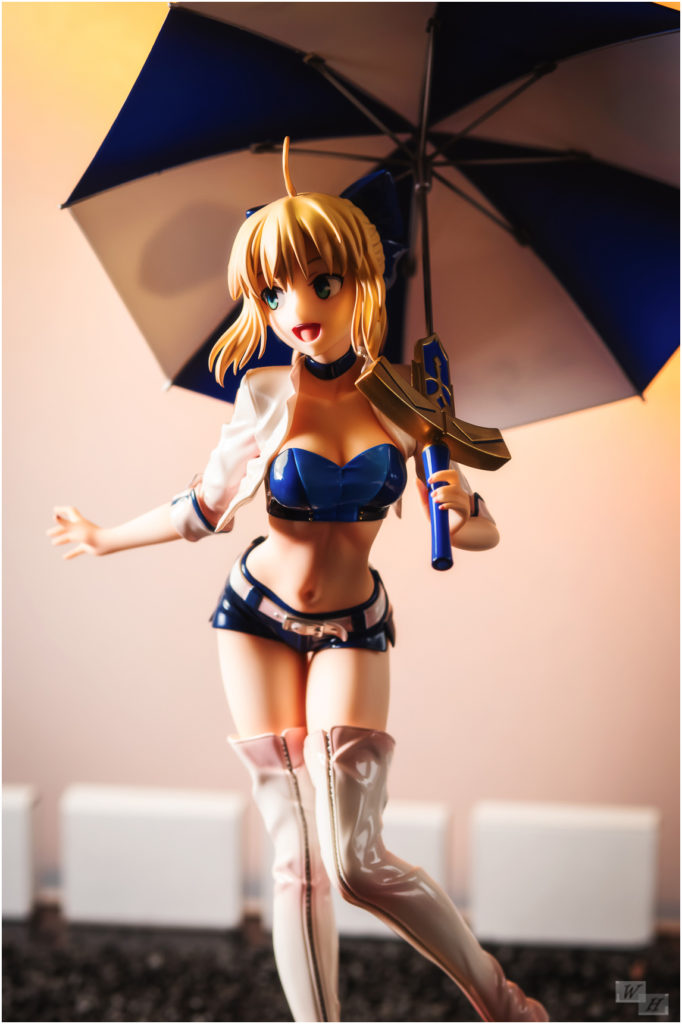 The shiny finish on her clothes looks high quality and creates a very nice contrast to the skintexture, it’s quite nice that metallic paint was used on the smaller details. The shading effects on the white clothes turns out quite nice. 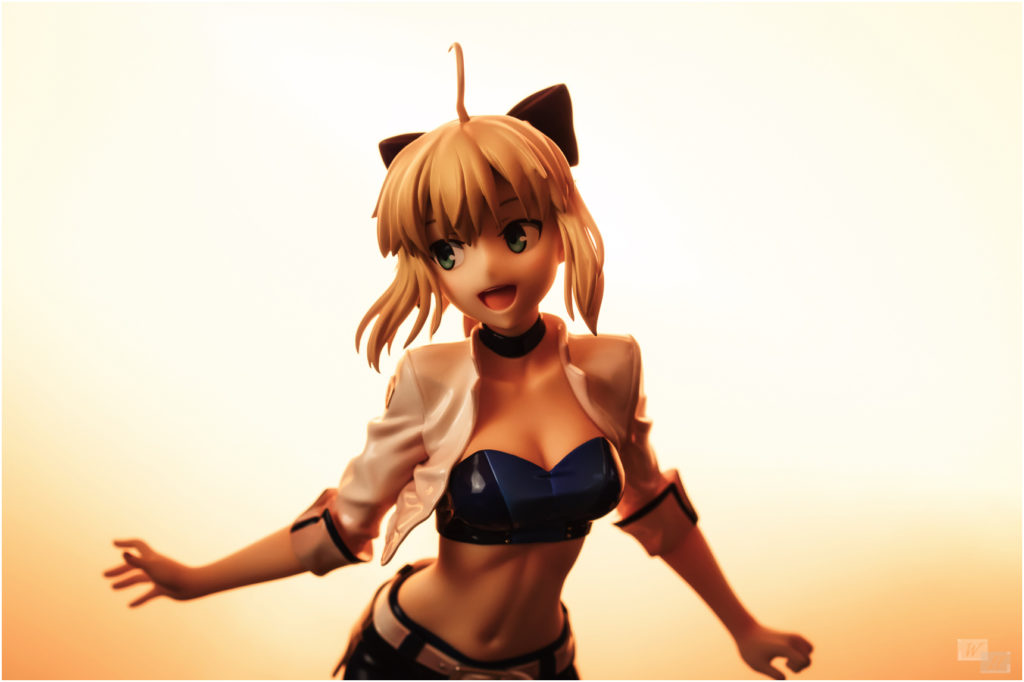 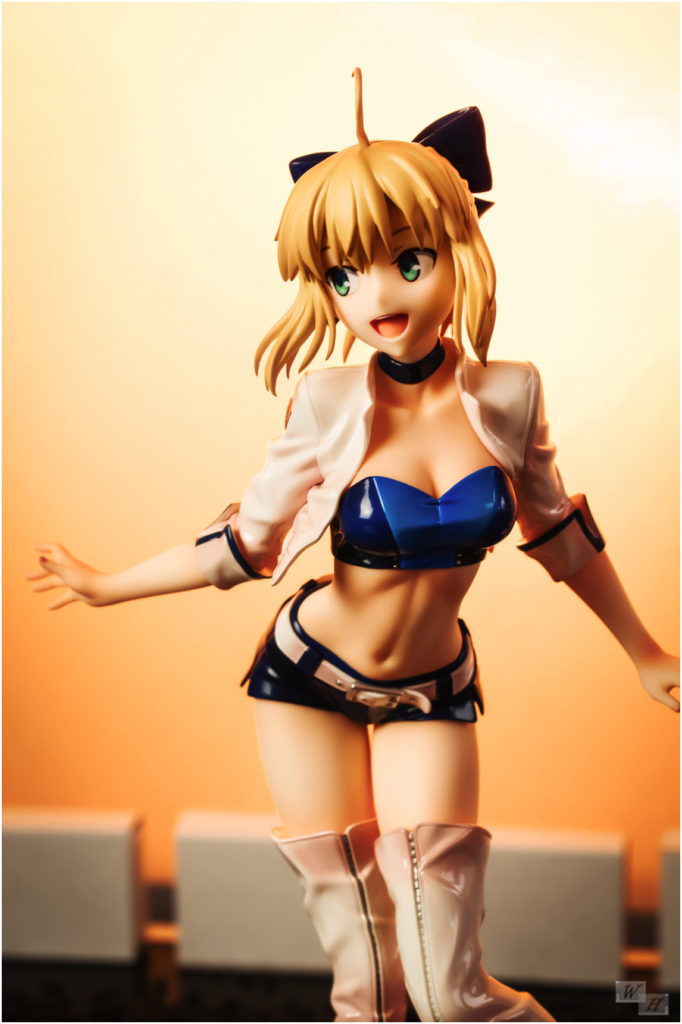 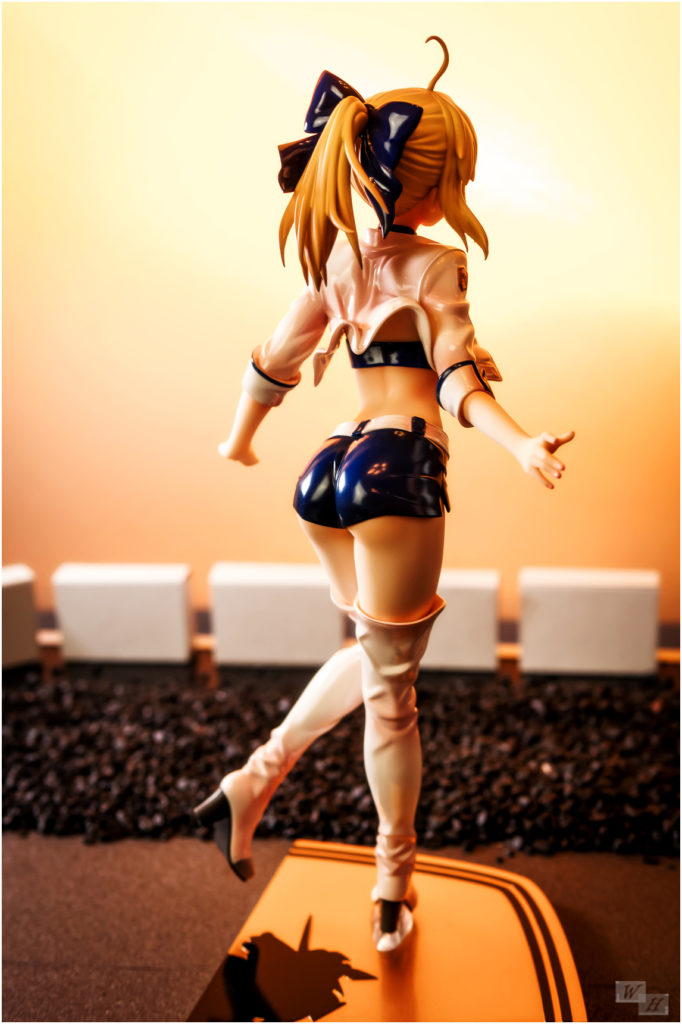 A cool feature of the Saber – Type-Moon Racing version is her big “escabrella” it’s quite funny that they turned her pretty Escalibur into a fancy looking umbrella. It has a nice pattern and quite detailed framework, If you ever zapped through the sports channel you will see grid girls holding the umbrella over the pilots, to protect them fromn the sun. The grid girls on TV are always pretty, it feels a little odd that the pilots are always just focused on the race, though. 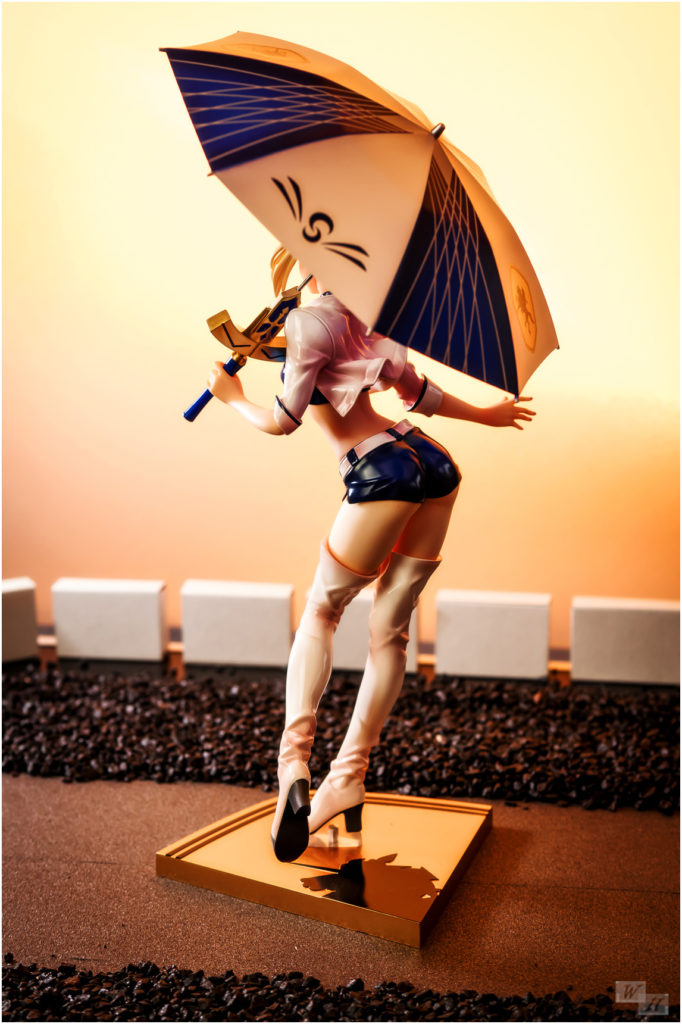 Her base looks a little cut into pieces, the reason for that is simple, there are 2 more figures from the Type-Moon Racing lineup, Tohsaka Rin and Saber/EXTRA, if you buy all 3 you can complete the “puzzle”. 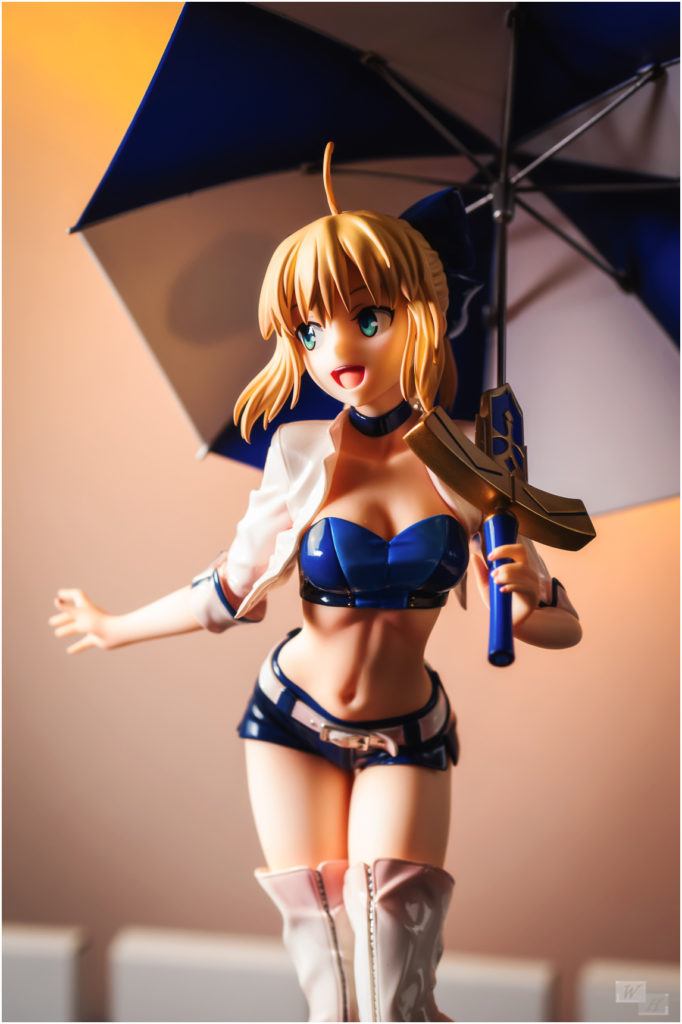 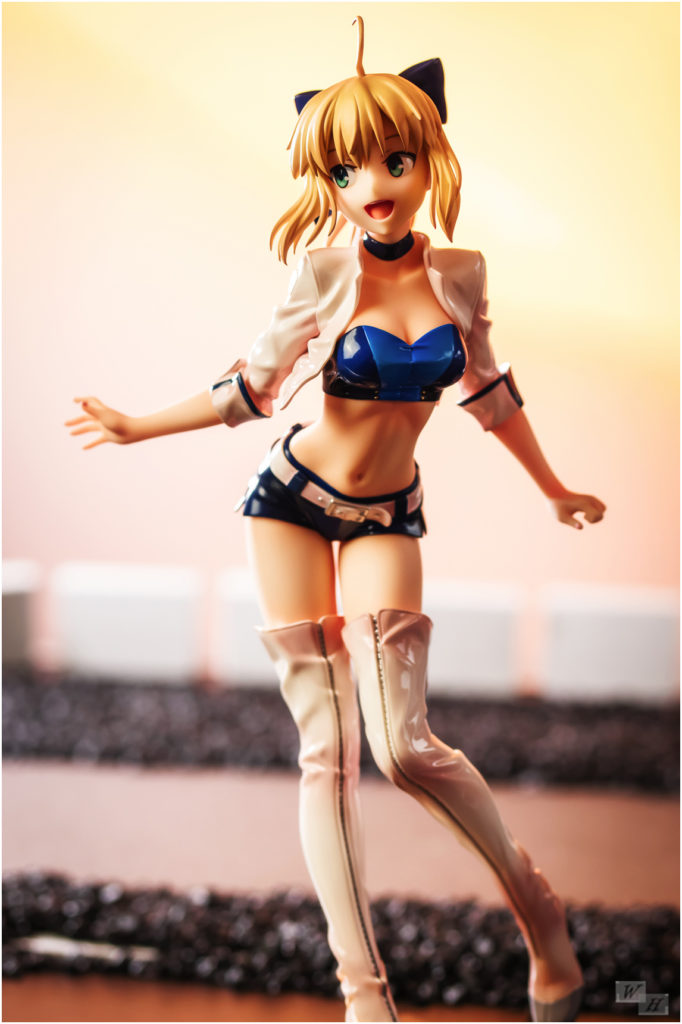 Without a doubt this is a great figure, the concept of sporty Saber is very convincing with her cheerful expression she has a youthful atmosphere. Her slender body and articulation show a lot of feminine attractivity. A great aspect of the figure is the awesome outfit with it’s really nice details. Stronger apparently makes great figure and the Saber – Type-Moon Racing version is one of them. 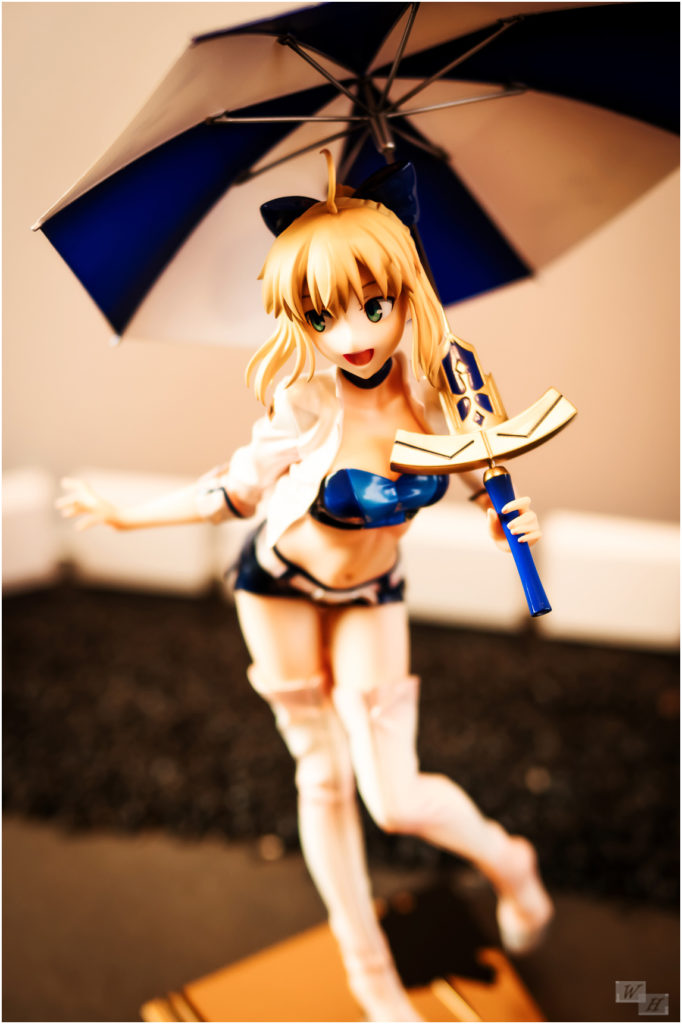 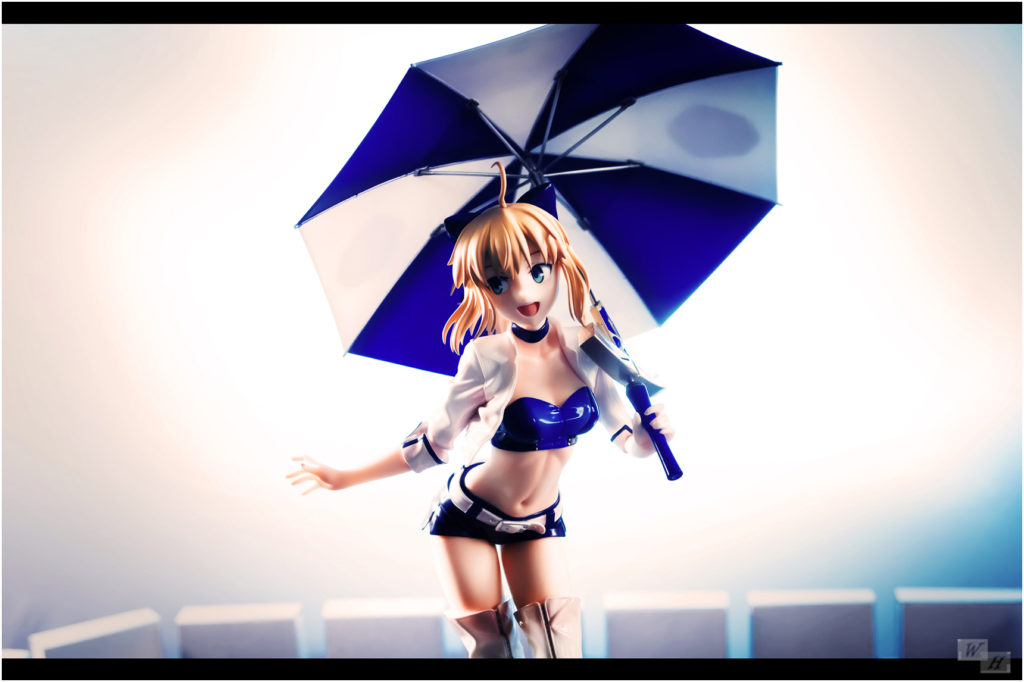