Hi everyone, Christmas is coming!
Luckily I already found the right presents for my beloved ones and wait for Santa san to deliver everything on time.

For today, I prepared another doll post featuring Dollfie Dream Sister Rio in a cozy and well lit atmosphere. 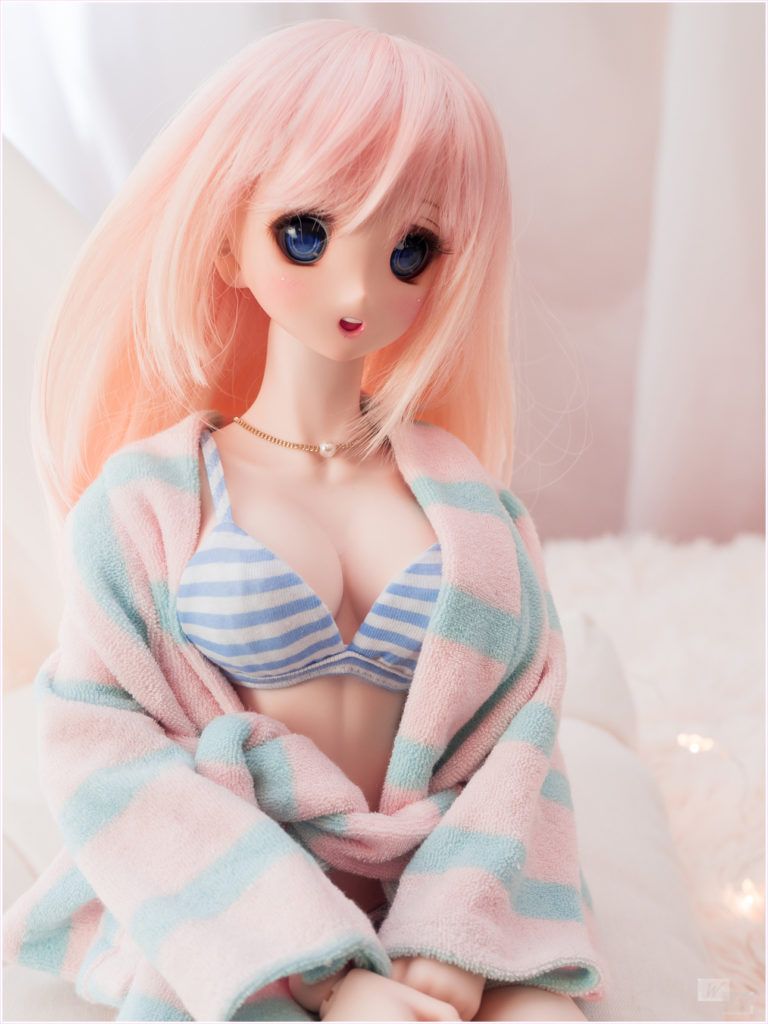 A reason why I like doll photography is the complexity of it. You have to worry about a lot of things, making the hairstyle and prevent it from becoming too messy, creating convincing poses, setting up an appealing surrounding and setting up a working light setup. All of that is actually fun most of the time, but sometimes it’s also unbearable. 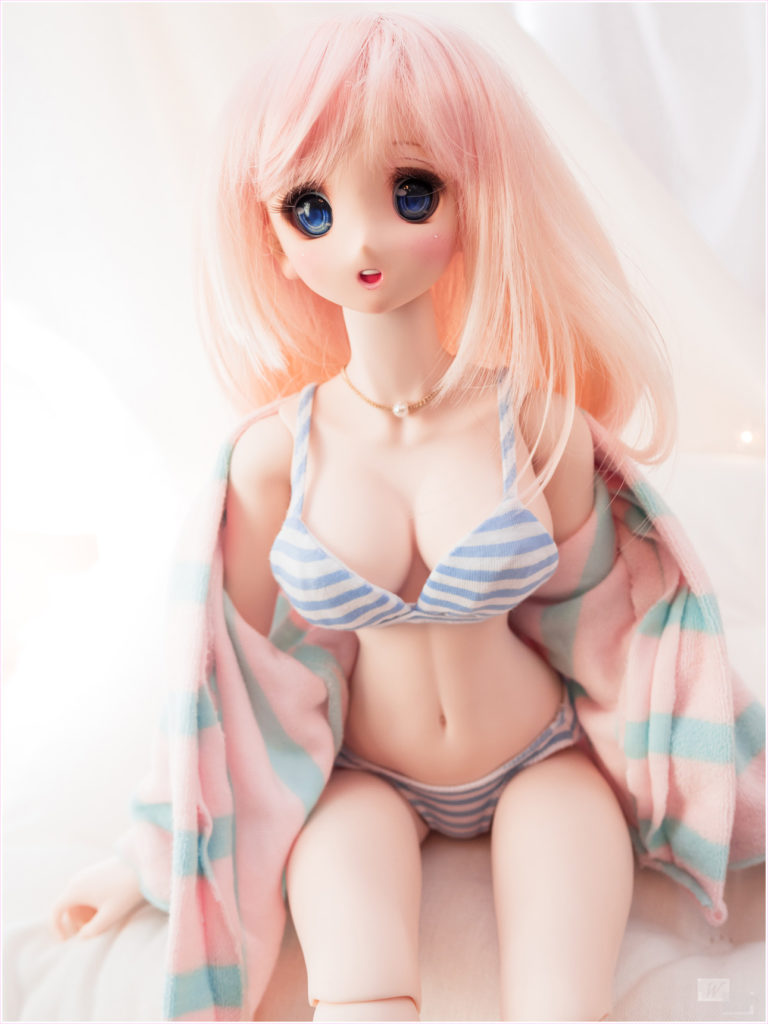 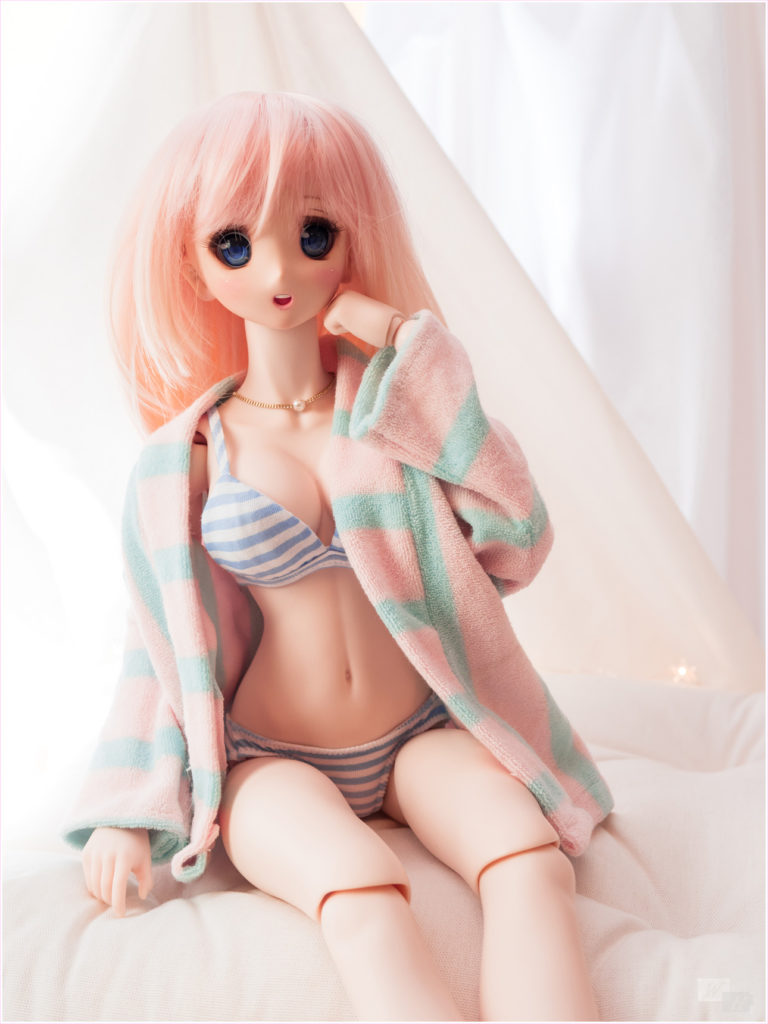 Rio was my second doll, but the first one with a customized face. I like my Rio, she is adorable and very cheerful. 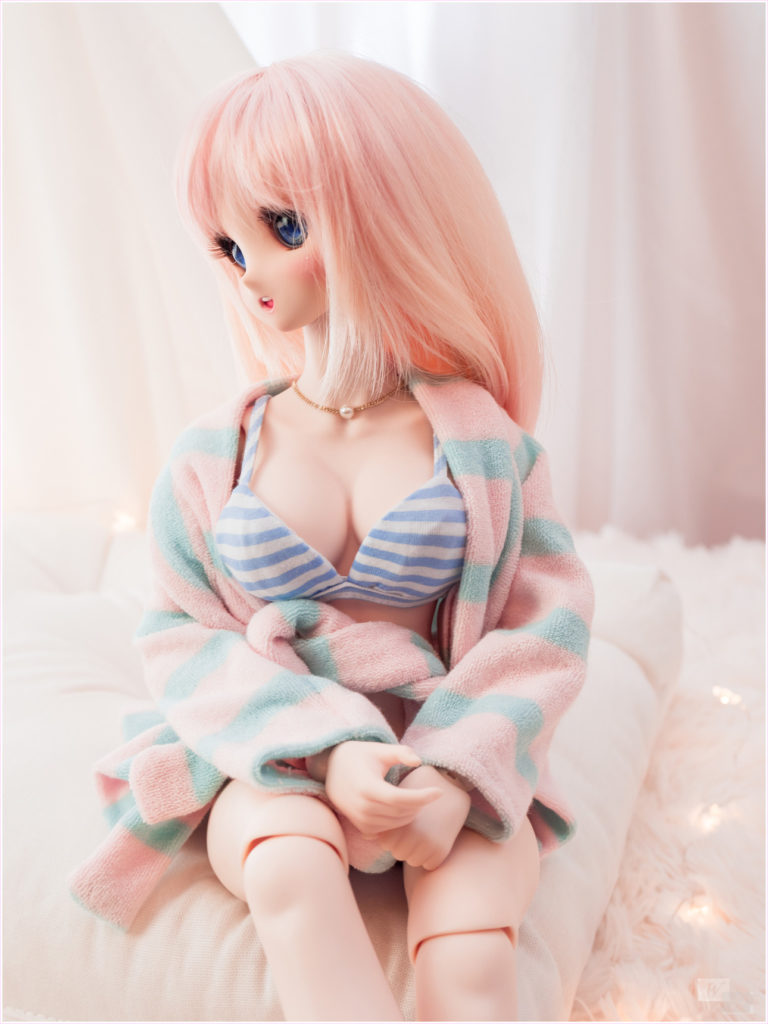 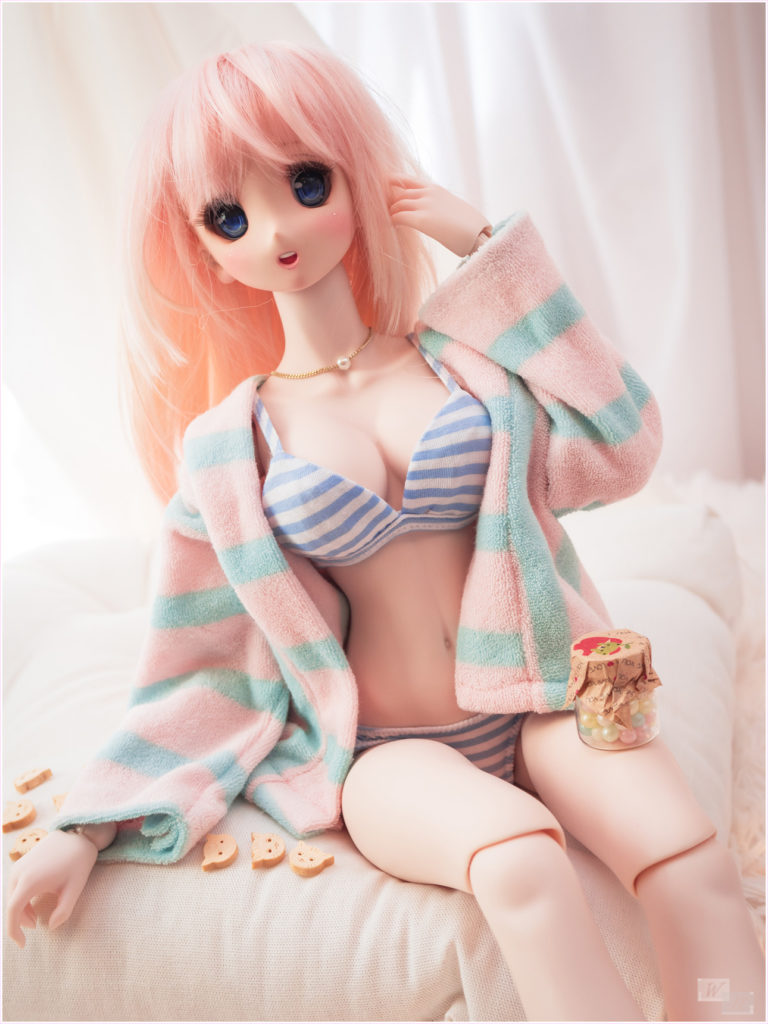 It’s been a while since I took pictures of Rio. I actually have more complete doll heads than bodies, I love custom made doll faces and can’t have enough of those lol, I often look through Yahoo auction the discover new pretty heads.

Nevertheless, I really don’t want to have more than 5 dolls at the moment. So Rio shares her body with Rinko.
In October her head was put in storage, so Rio has time to shine again. I’m going to solve the one body for two heads issue when Volks makes the DDP body officially available, DDP is something like a bigger MDD. 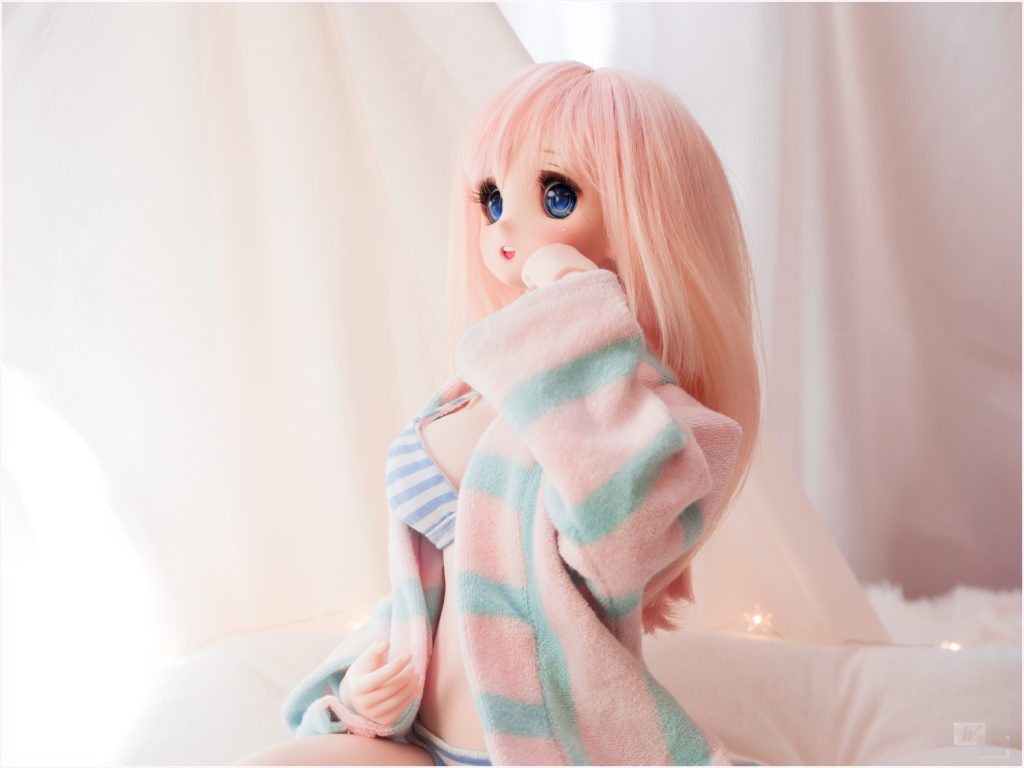 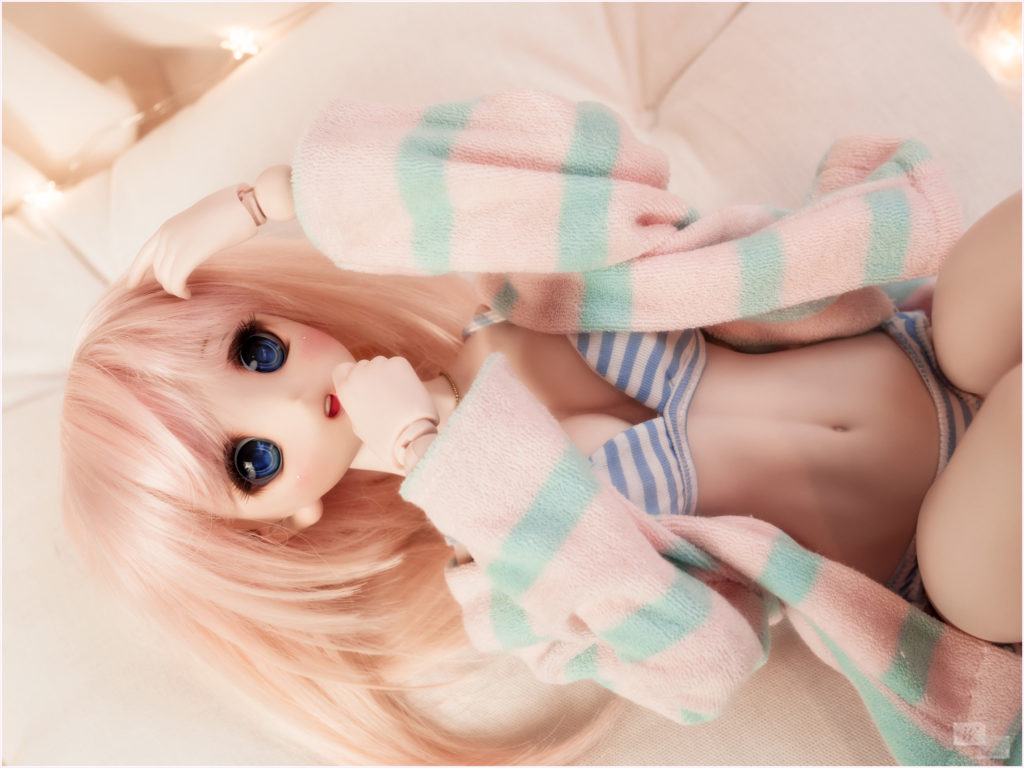 I often have the “bad” habit to take pictures of Rio in underwear with her innocent smile it rarely looks ecchi in my opinion. In this shooting she is dressed in a bathing Robe, that I bought 2 years ago on taobao and the Striped Underwear Set DDdy, that Volks restocked after years of waiting. The One-Piece Torso is a really good thing without the torso gap it’s great for doll photography, it has a really attractive stomach along with other nice areas (⁄ ⁄^⁄ᗨ⁄^⁄ ⁄). 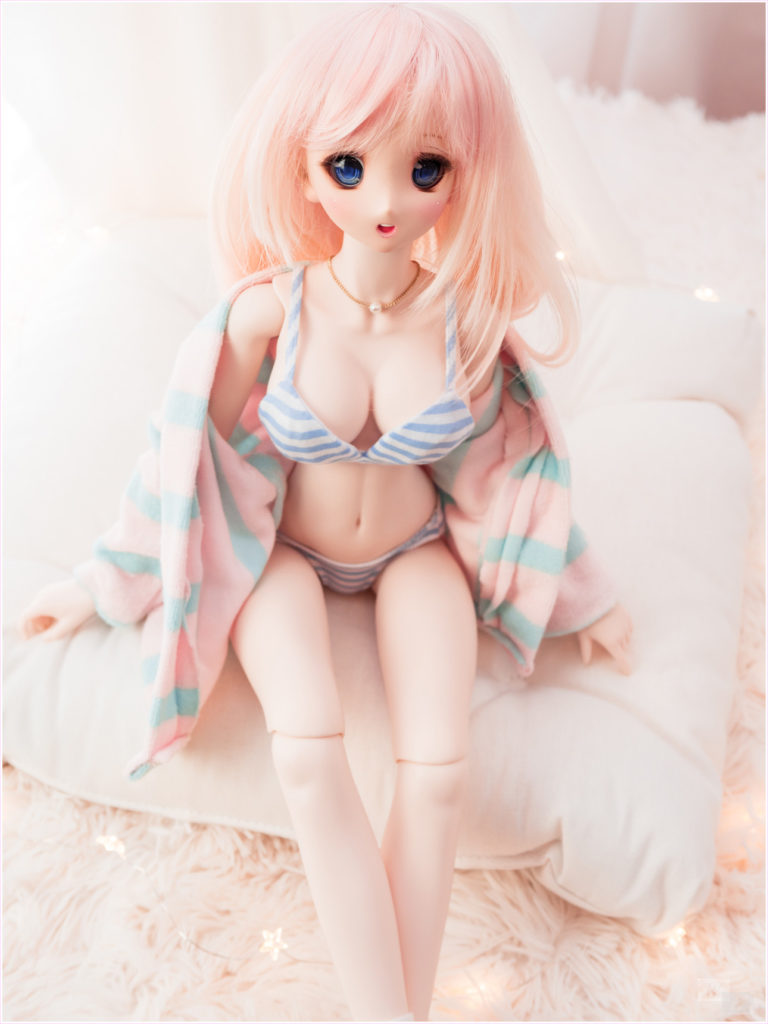 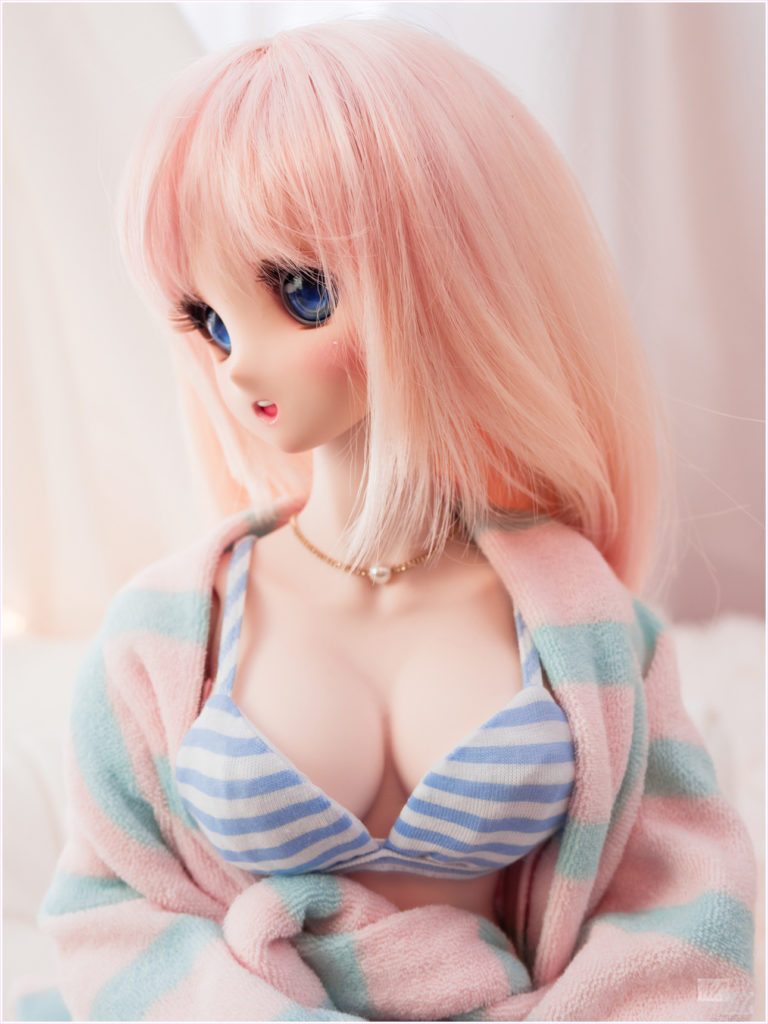 I’ve tried to create some cute poses without drifting too much in sexy territory. Rio’s slightly fluttering expression is just too cute. The bathing robe is cozy and comfortable and helps with hiding gaps on arms and shoulders. 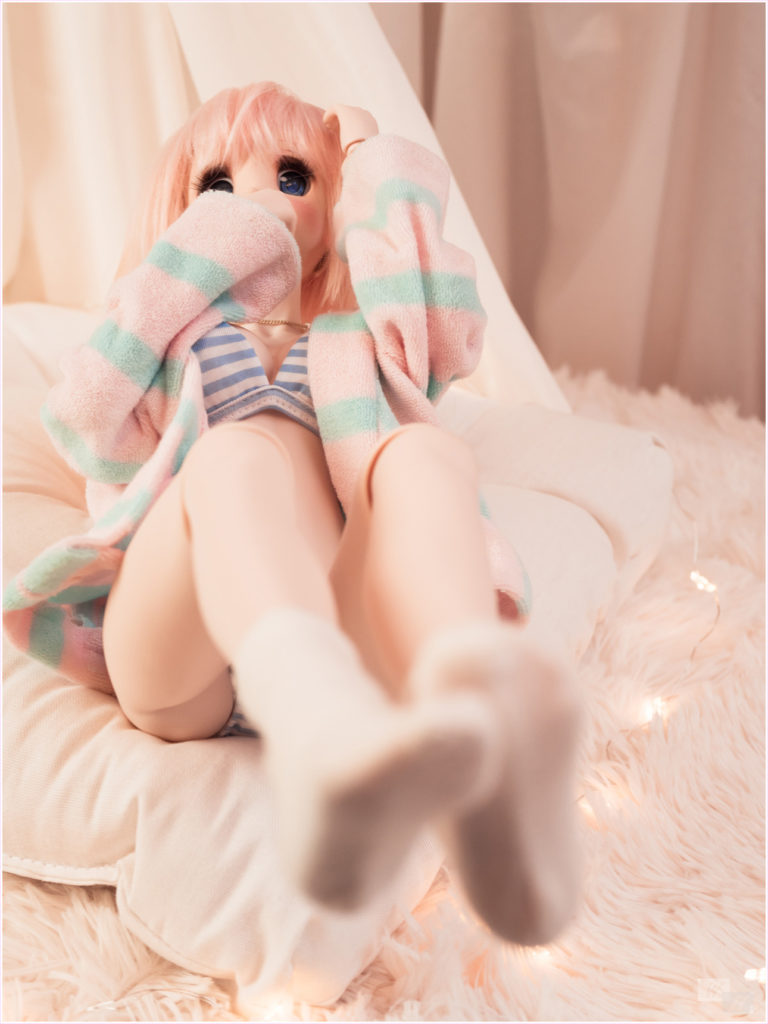 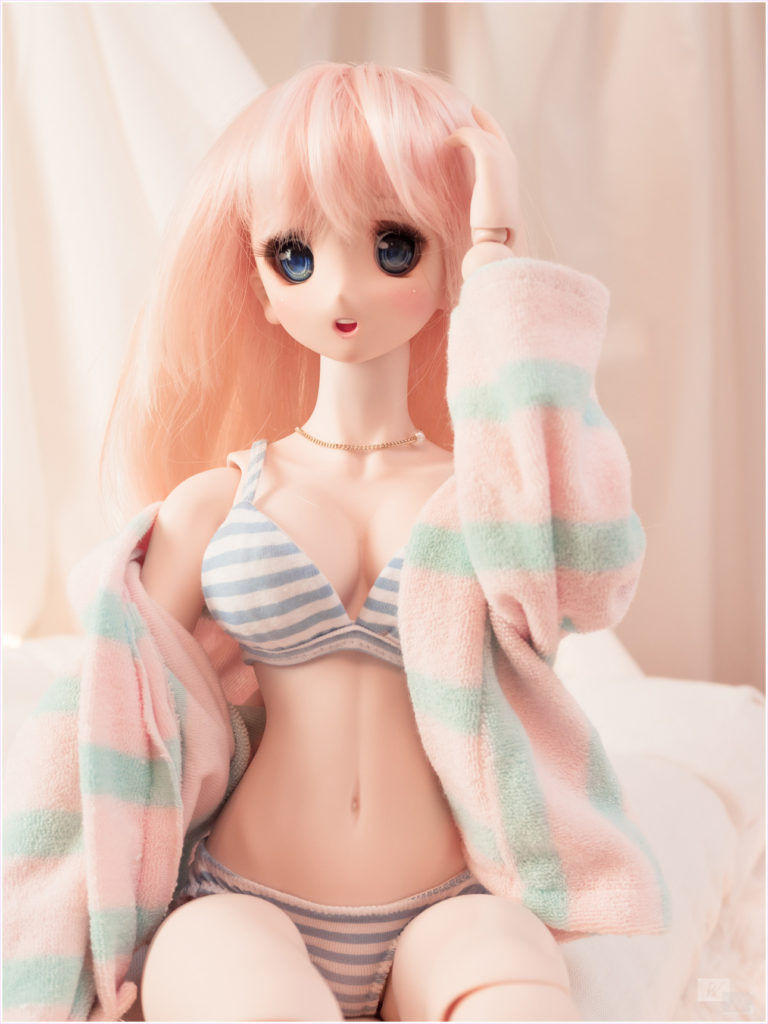 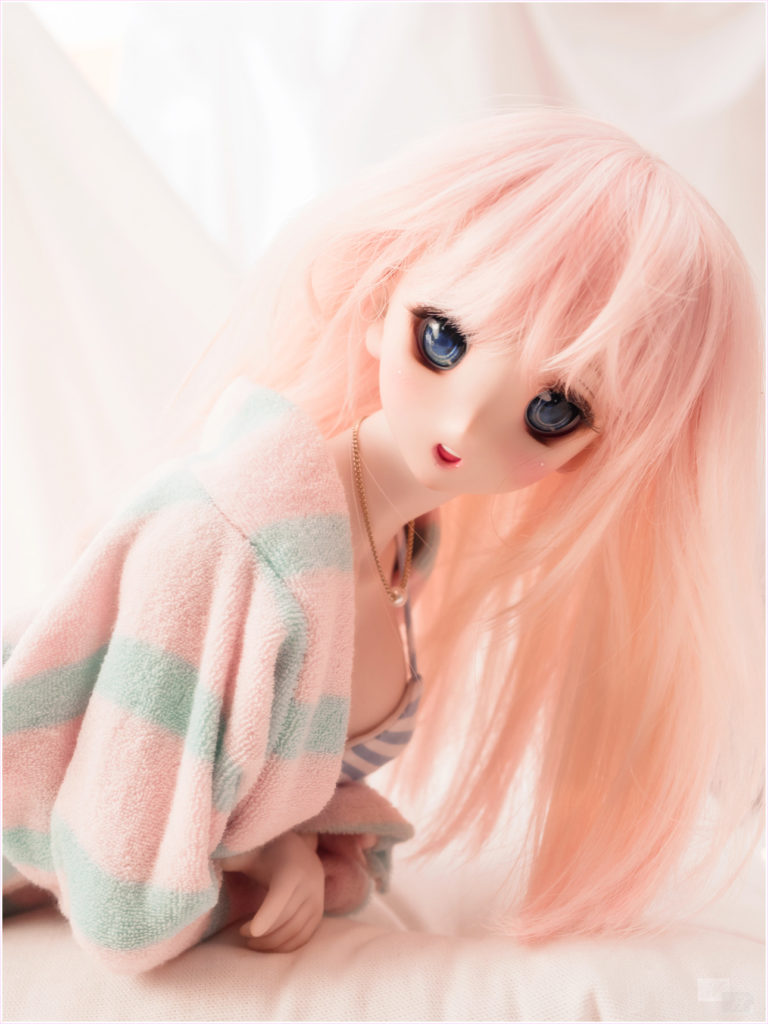 My lighting with doll photography often have been hit or miss, this time I was quite surprised, that I’ve managed a rather good light atmosphere, the placement of the external flash unit and support lighting were apparently good. 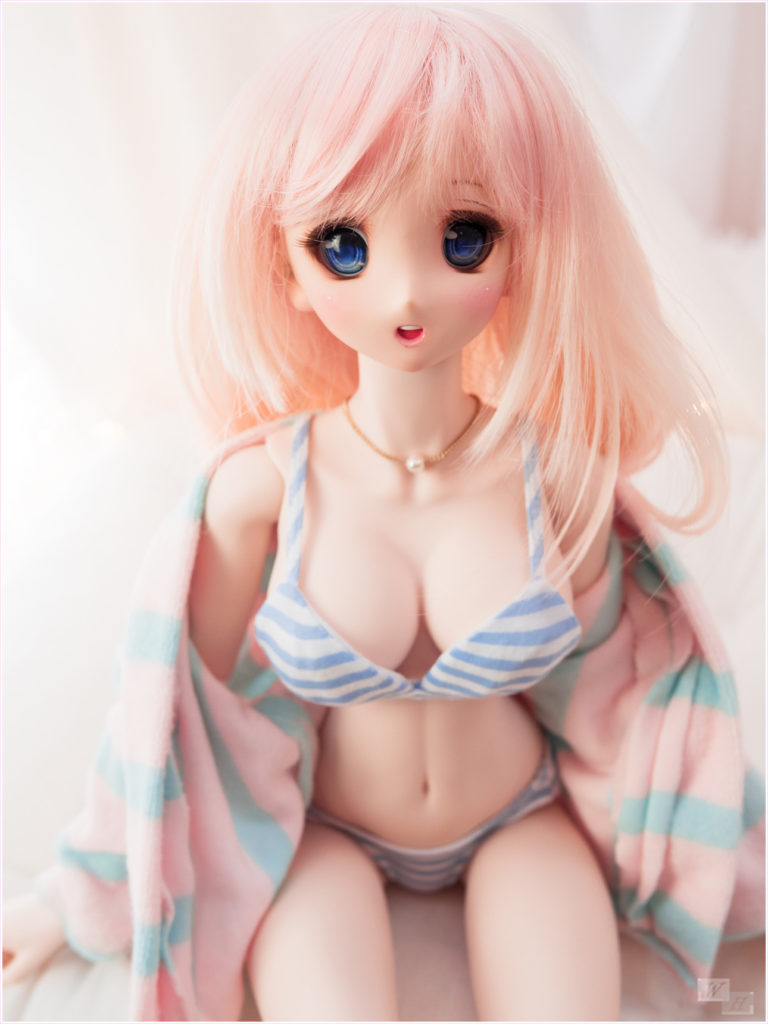 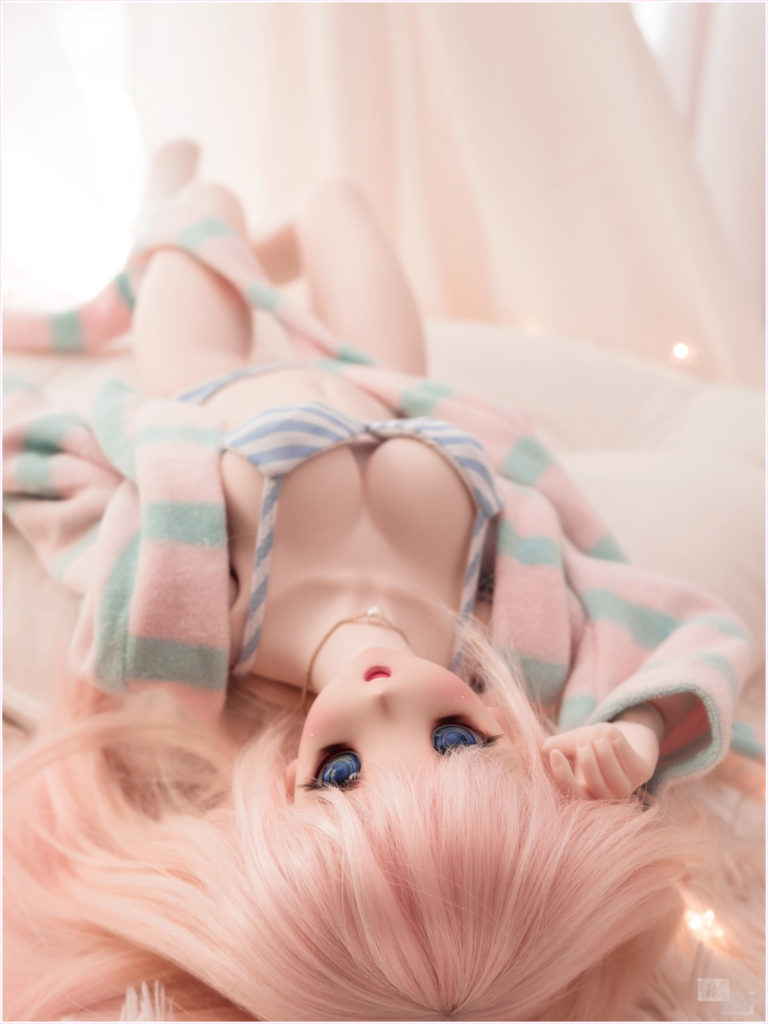 I’m still not at the point where I want to be with doll photography, I notice small improvements from time to time,
but I actually think this shooting wasn’t too bad. I hope you liked the pictures of Rio as much as I did ^^. 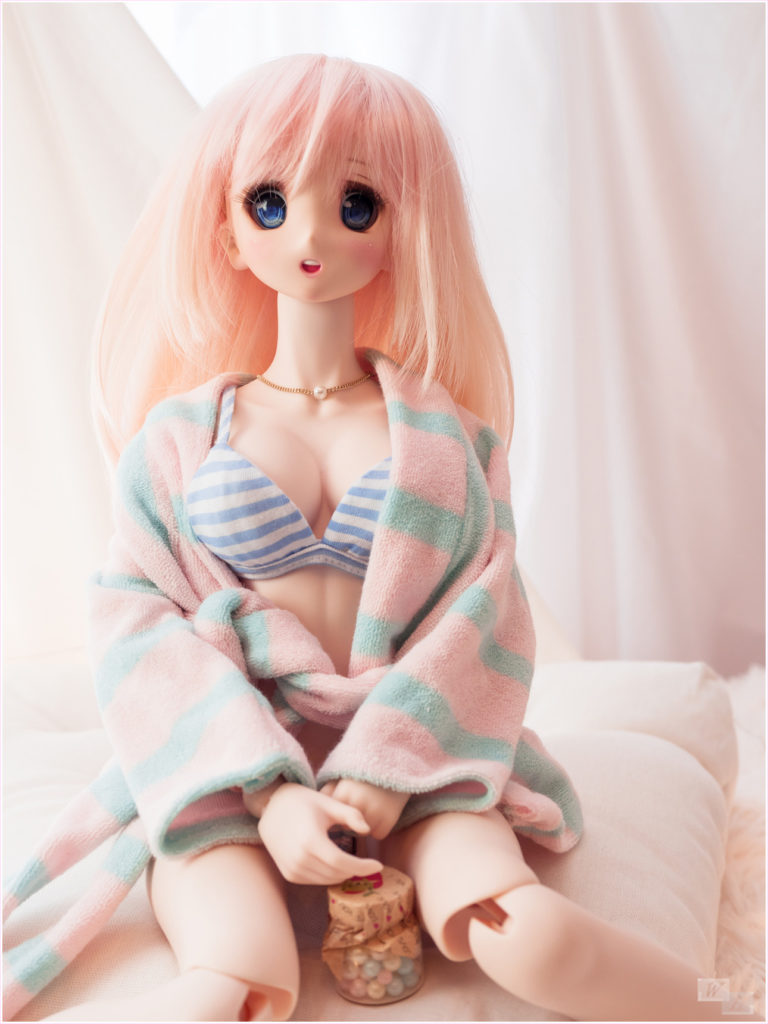 Until my last figure for 2017, Hanasaki Marika arrives, I will stay with the doll related posts, stay tuned ..or not.