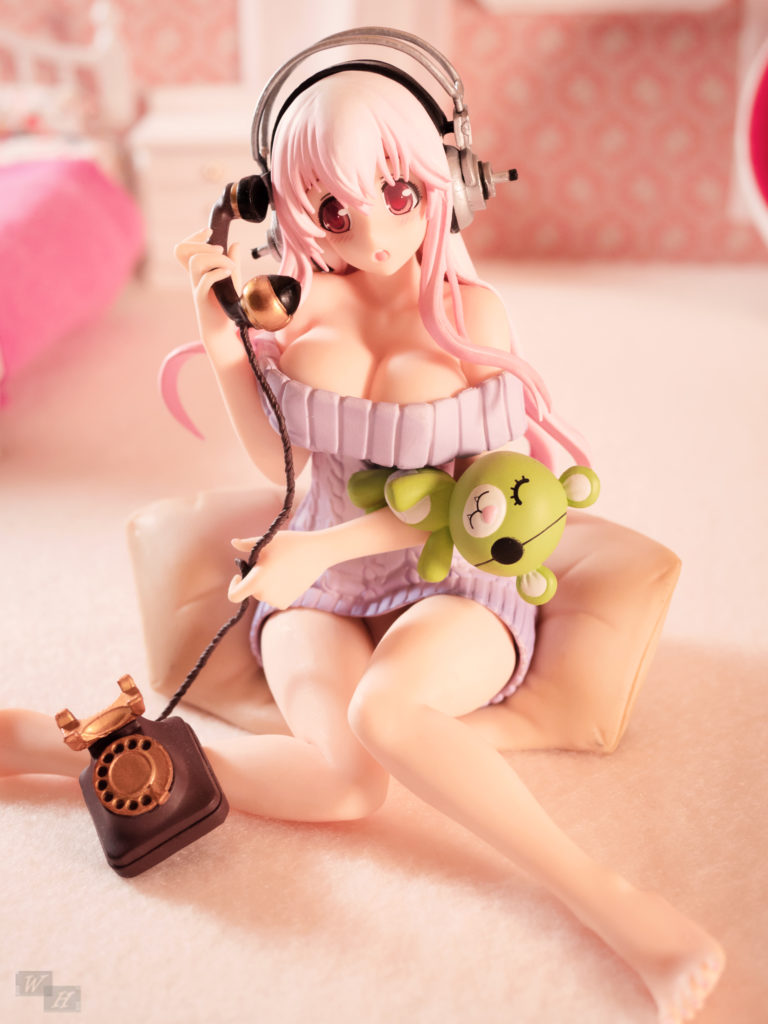 Sonico always has a place in my heart and on this blog, what started as simple Nitro+ mascot illustrated by Tsuji Santa, lead to the Sonicomi game that brought the Sonico character to life with a cute voice, an nicely animated 3D model and personality. In the end Sonico also got her own anime. Back in the days I loved ordering her figures from Orchid Seed, several great figures were made after another. In summary I wasn’t convinced by all figure adaptions of her, but I got my fair share of great figures. I always liked that Sonico was a sweet pink haired girl with a curvy body. 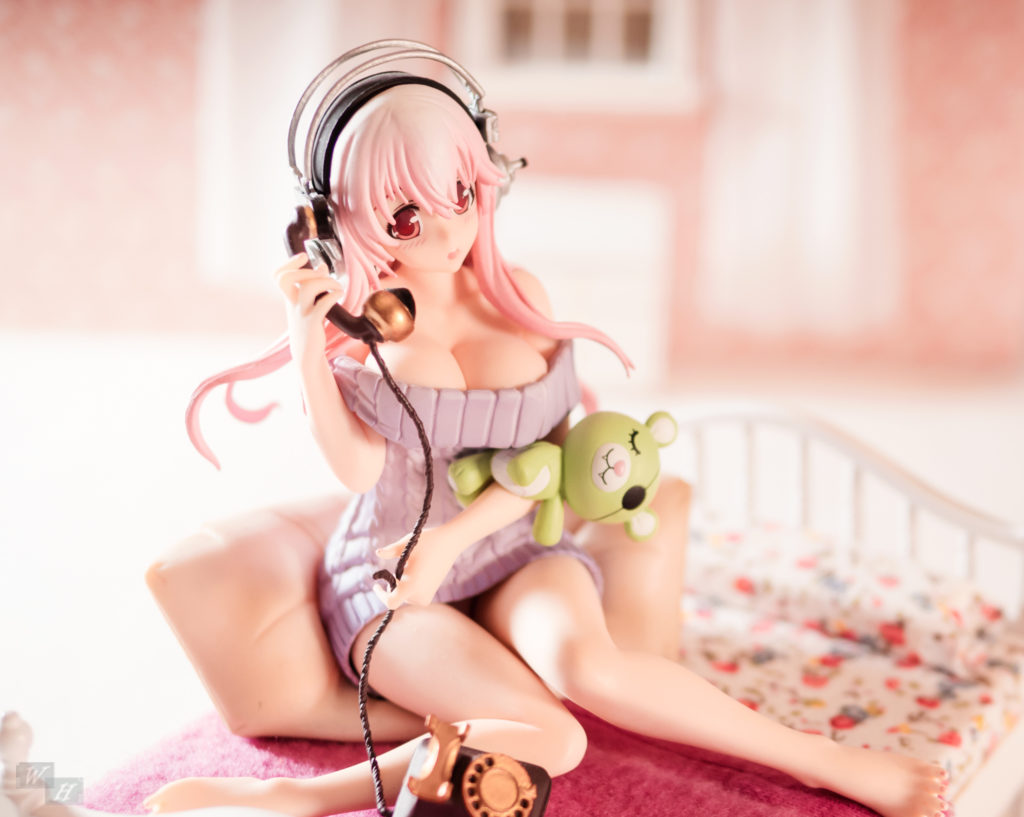 What I also liked was the Seikatsu Micchaku Shuzai Special Figure (Lifestyle Total Coverage Special Figure) lineup from FuRyu, where Sonico is portrayed in a variety of daily life activities. Those nicely made prize figures were more focused on Sonico’s cuteness than her being sexy dynamite. The Sonico – Sweets Time version was my first figure that I’ve bought from FuRyu, that review was from 2014 though, last christmas (2017) my dear sister gave me another figure from this lineup, the Sonico – Chatting Time version. I was happy that my sister remembered that I really like Sonico. 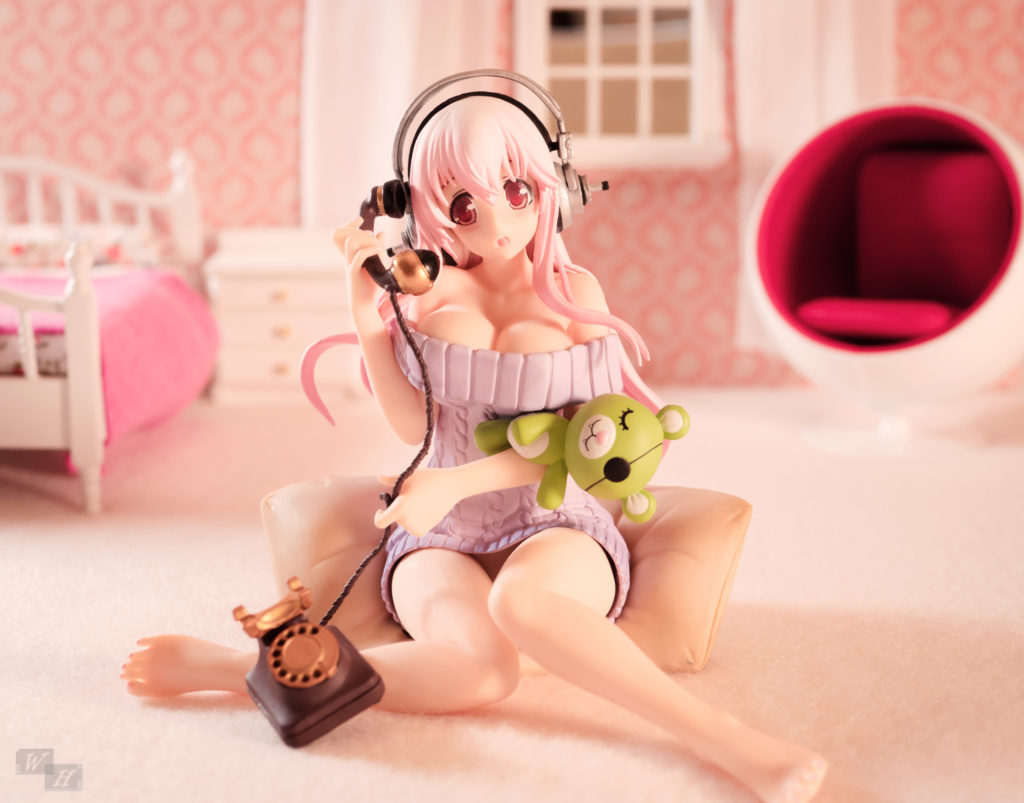 Since 2014 Prize figures constantly improved in quality and some even rival a few of the big manufacturers adaptions, of course not because of perfect quality but when there is one thing those figures show their appeal it’s creativity and nicely articulated poses. Recently I was quite impressed by an Kaede prize figure that fellow figure photographer Miette purchased and photographed. Prize figures of Love Live Sunshine currently look more interesting than the announced figures of the top manufacturers, it’s amusing, but I nevertheless also hope to see figures of Aquors in fancy and pretty idol outfits at the upcoming Winter Wonder Festival. 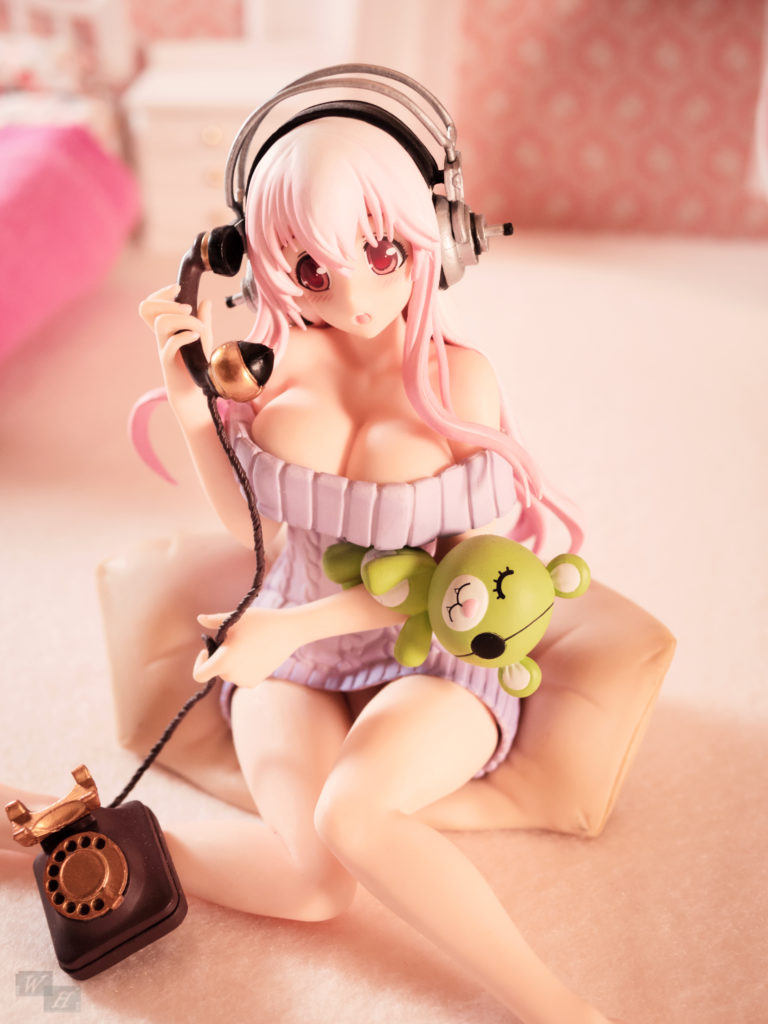 Sonico is sitting on a pillow with her legs placed on the floor, in this pose she measures 140 mm in height. 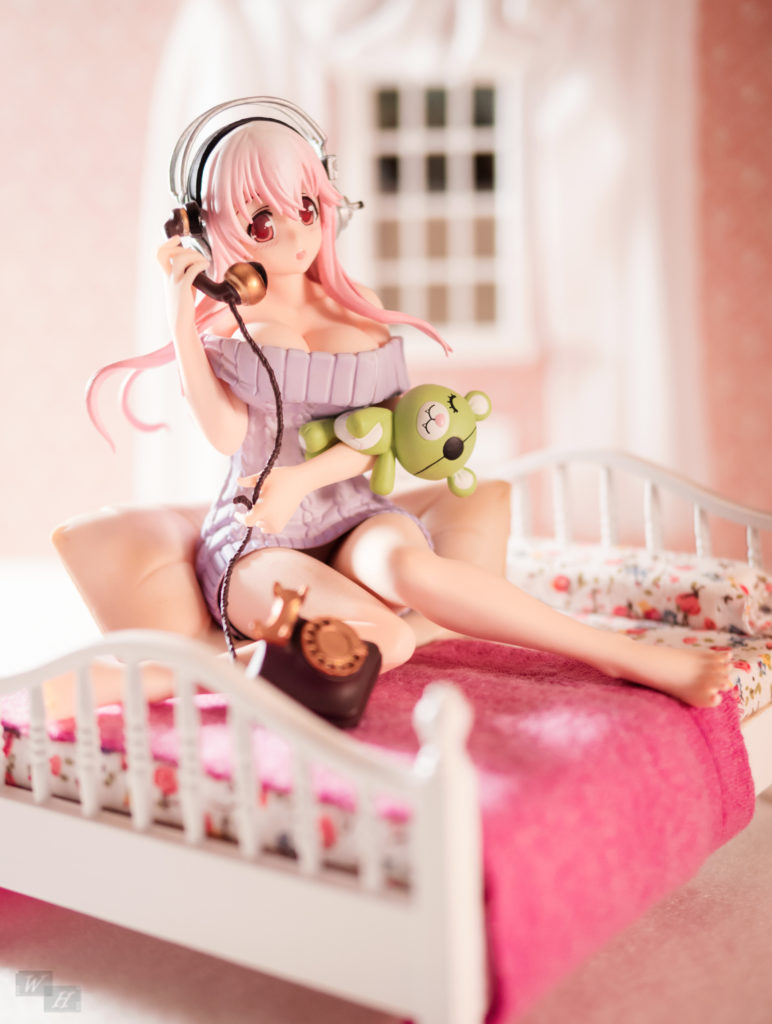 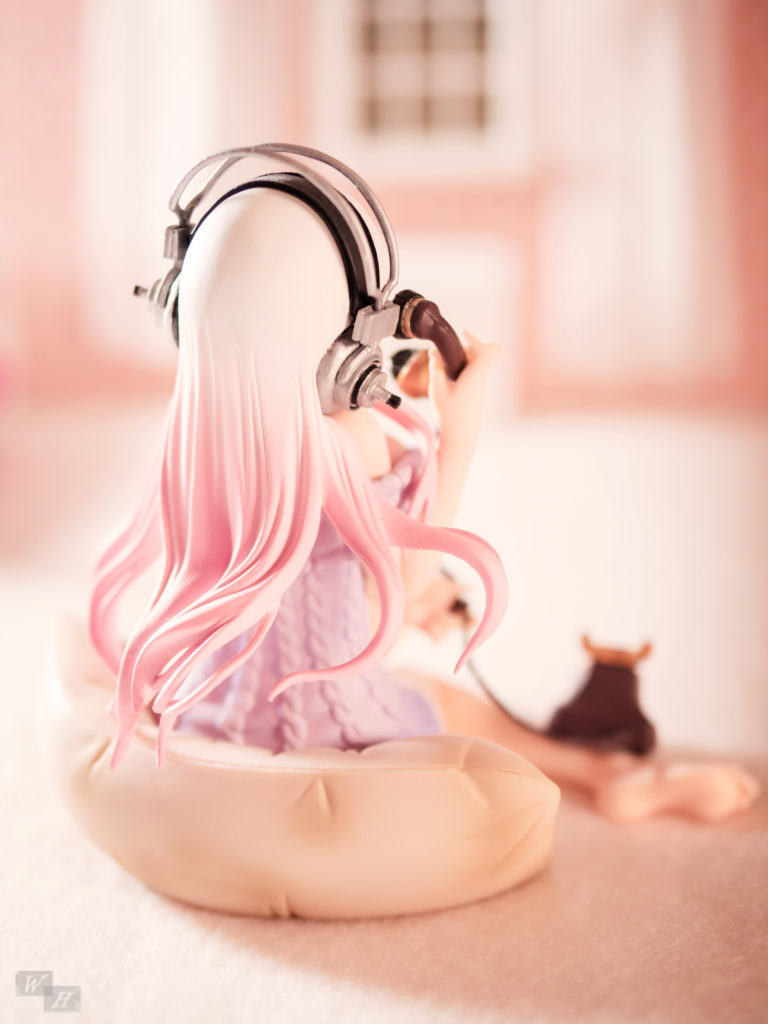 The figure has a nicely articulated pose, portraying a everday scene of a girl having a chat over the phone.
The vintage telephone gives the figure additional charm, as well as the green teddybear that she is holding in her arm.. 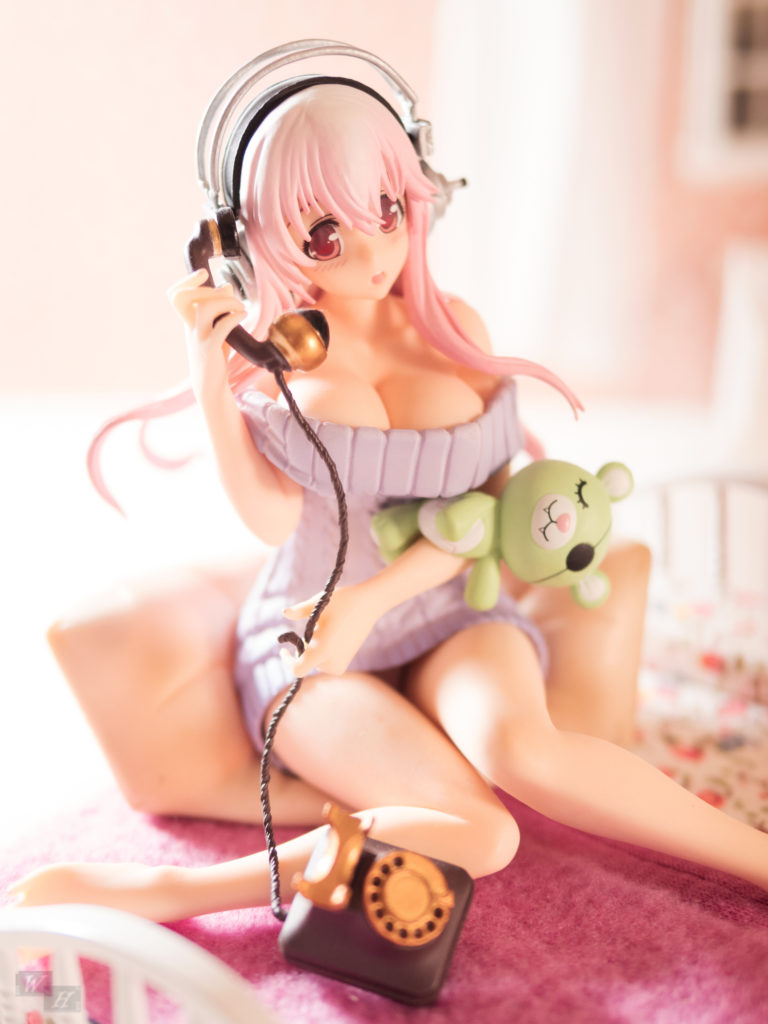 For the pictures I used a backdrop that I’ve build for last years Maid Ami figure and took a few things out of my figure furniture box and created a cute room for Sonico. The sweater dress of the figure has an attractive design and texture. 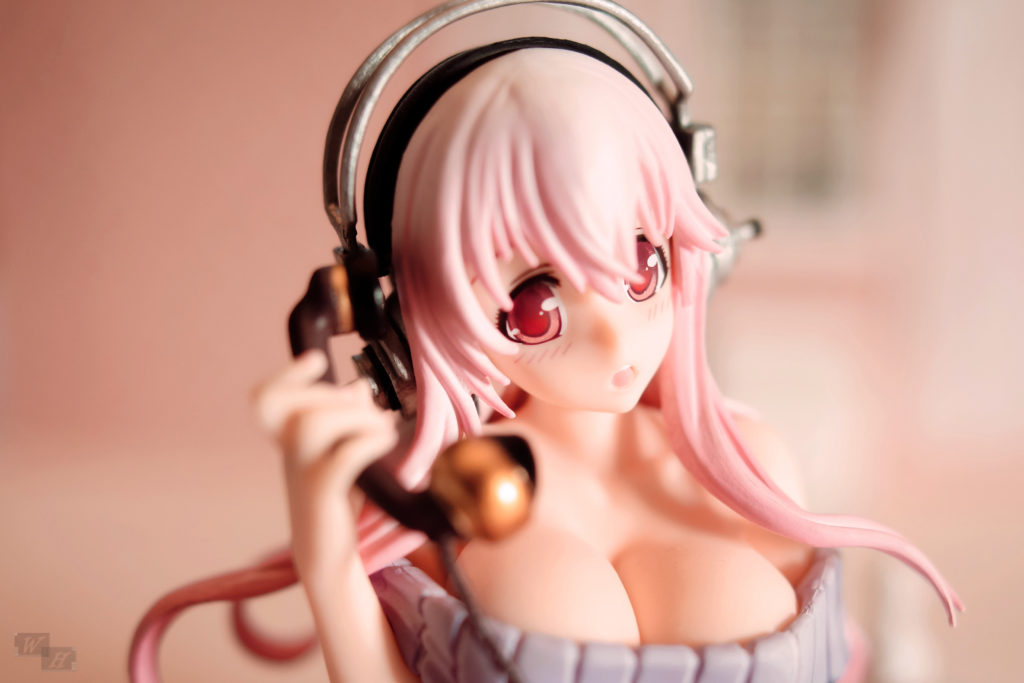 Sonico’s face looks very cute with blush marks and crisp eye decals, her face also wears a quite expressive facial expression. It seems like Sonico listens to something exciting or maybe she heard some shocking news over the phone right now. Her hair looks good with the backside being especially smooth and the pastel pink gradient is just beautiful. 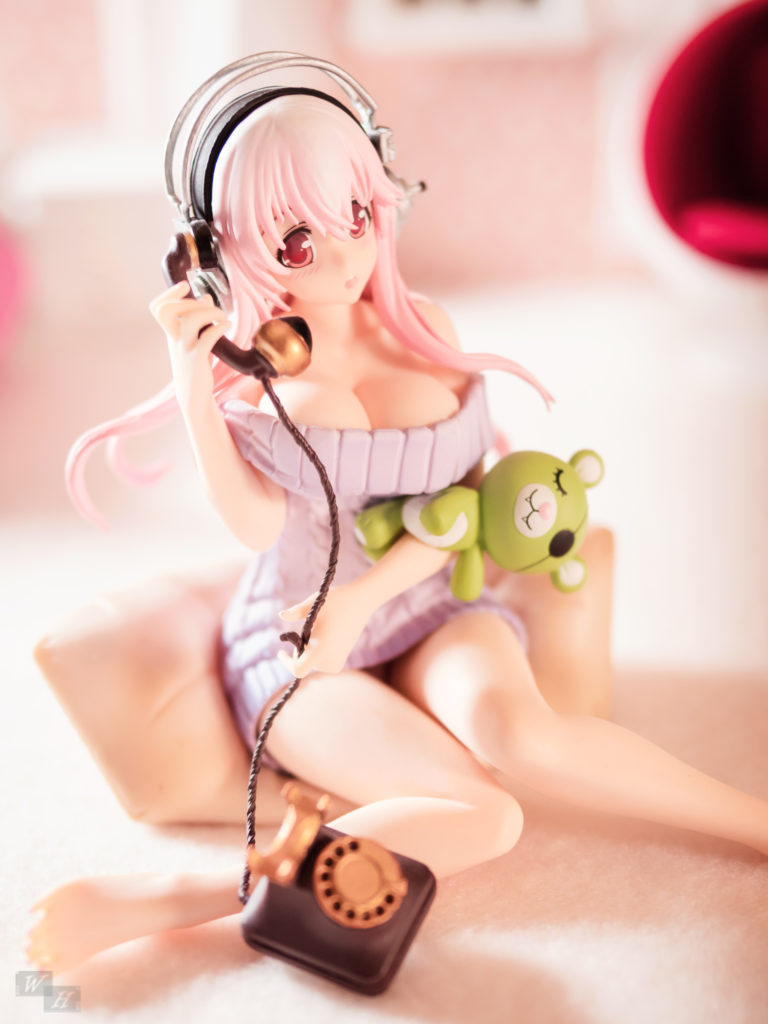 Of course Sonico also is sexy, in her shoulder free sweater she has a pretty cleavage and nicely shaped legs. 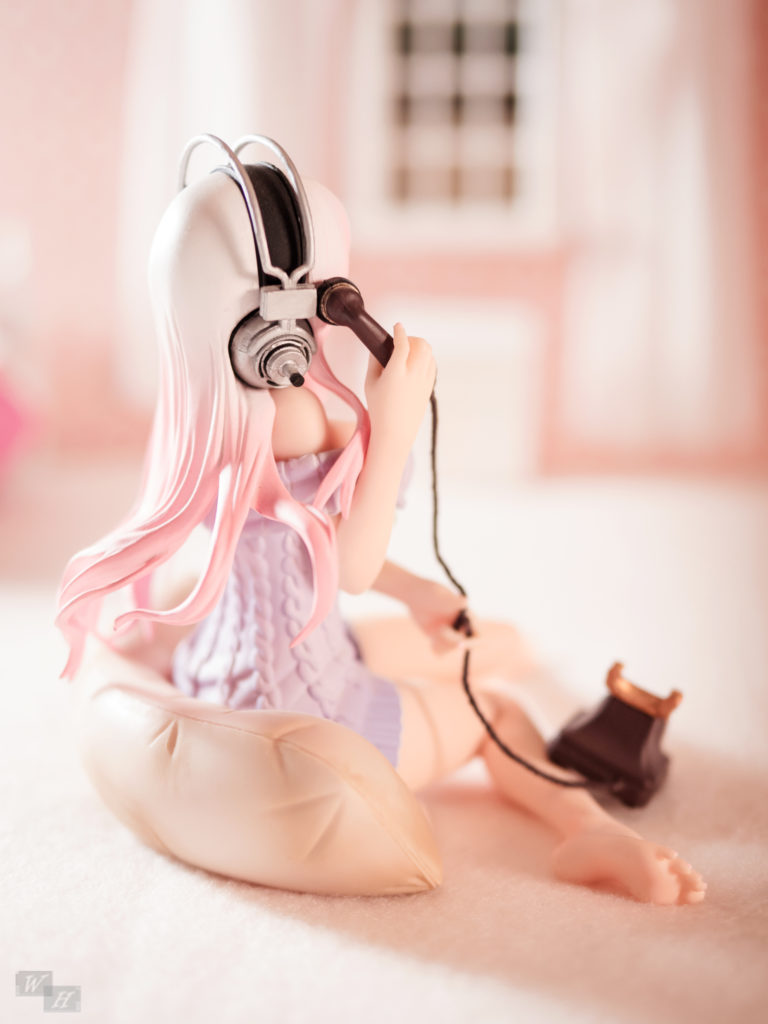 Overall it’s a nicely sculpted and nicely painted figure, the colors have an appealing saturation the sculpt leaves a very good impression, on closer inspection some areas are slightly rough, but you could display the figure with pride. 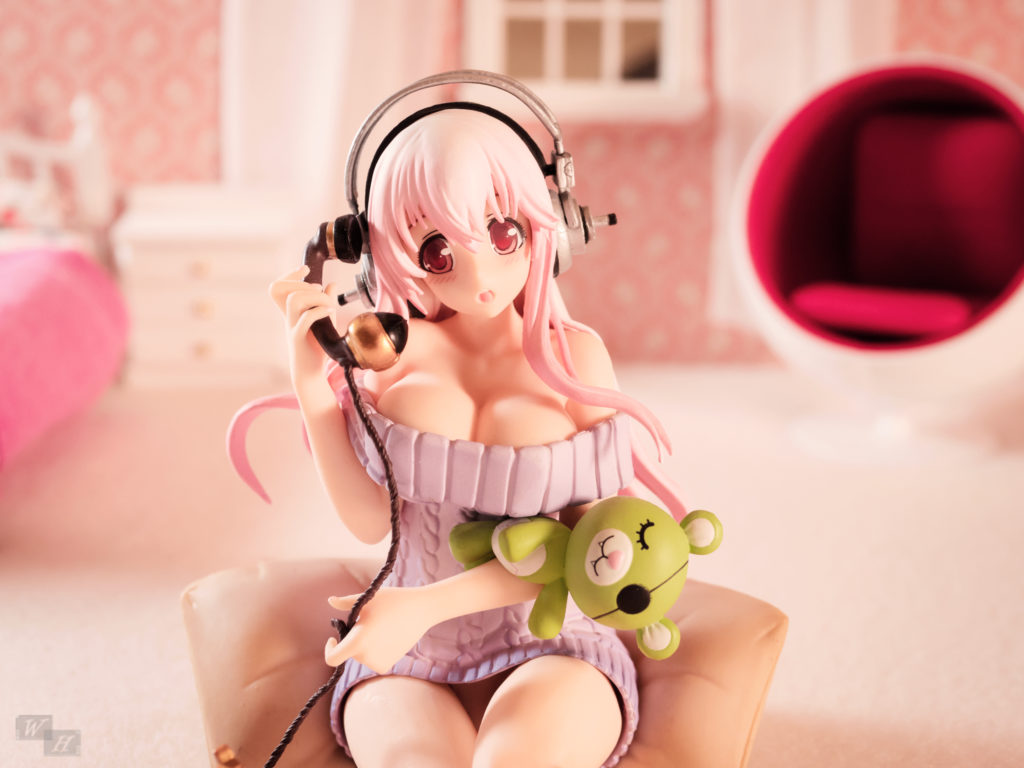 I don’t purchase many prize figures, eager collectors are always in need for space and I rather would order an expensive figure to put it on the shelf honestly. But I might make an exception for anime characters I really like ^^. 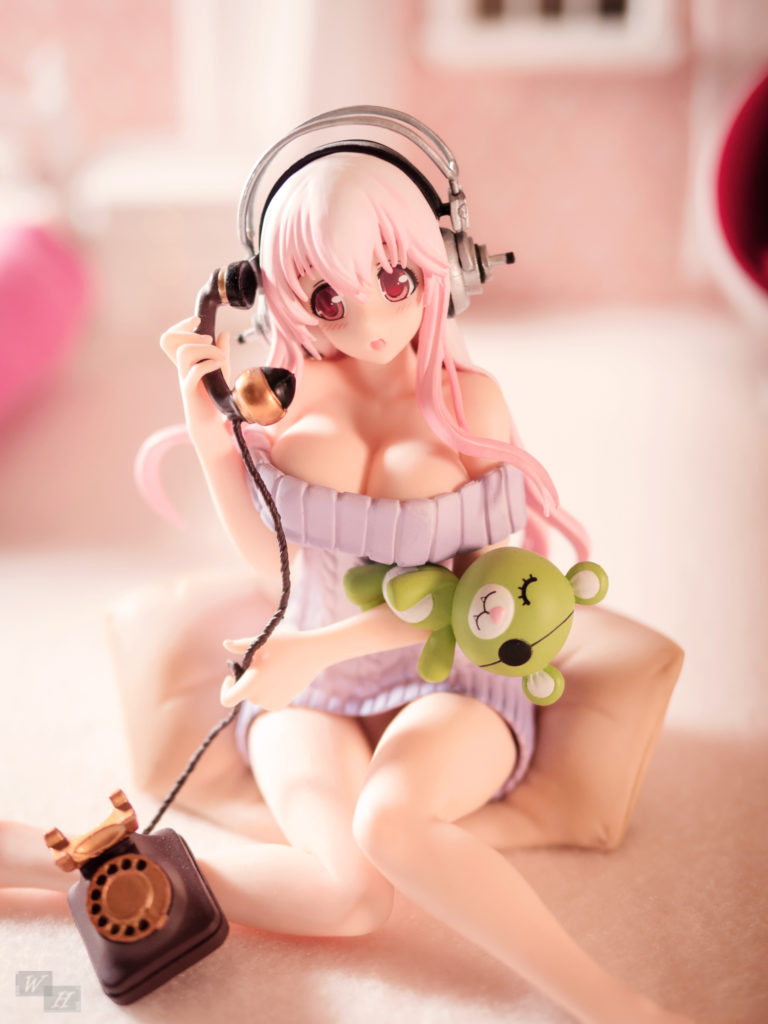 Anyway, even with a limited budget one doesn’t have to live with unappealing figures, prize figures nowadays can be both appealing and affordable 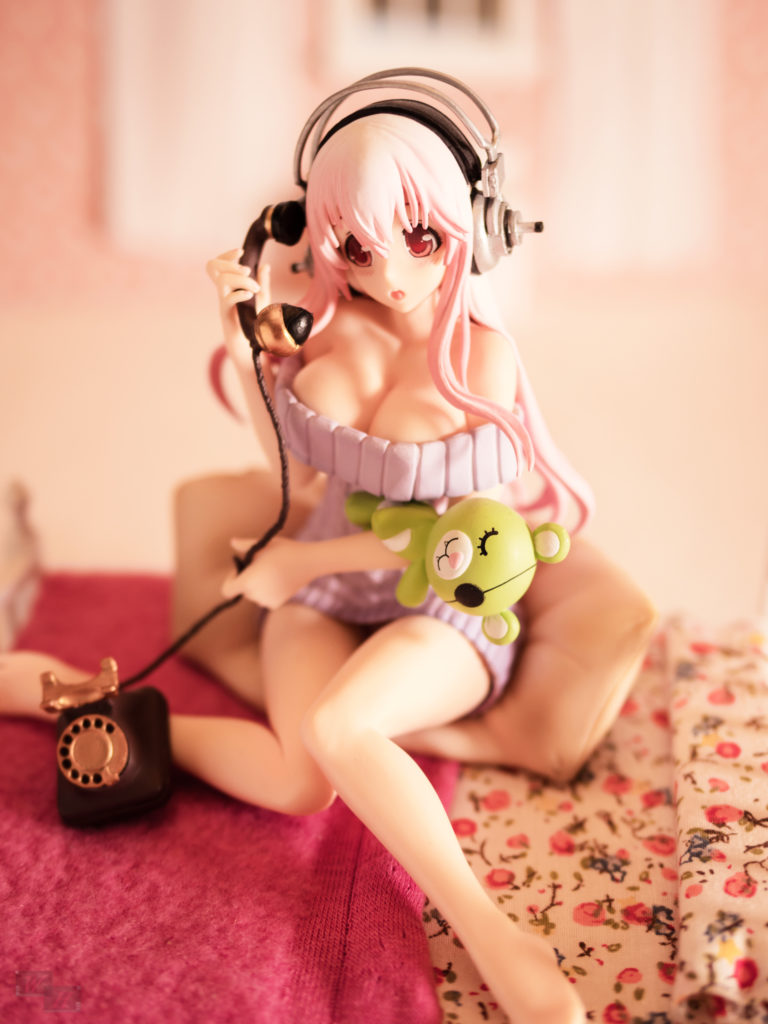